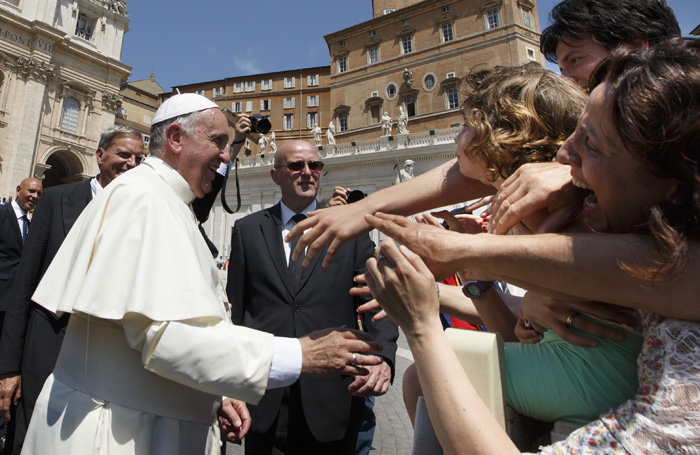 Pope Francis greets the crowd during his general audience in St. Peter's Square at the Vatican June 11. The pope denounced those responsible for human trafficking, slave labor and arms manufacturing, saying people producing weapons of war are "merchants of death." (CNS photo/Paul Haring) 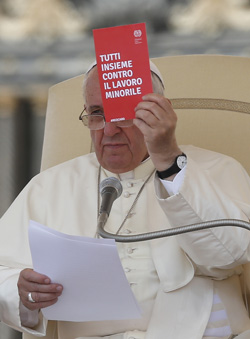 Pope Francis holds up a pamphlet for the Red Card to Child Labor campaign as he leads his general audience in St. Peter’s Square at the Vatican June 11. One day in advance of the World Day against Child Labor, the pope appealed to the international community to help safeguard children from forced labor. The words on the pamphlet in Italian say: “All together against child labor.” (CNS photo/Paul Haring)

“One day everything comes to an end and they will be held accountable to God,” the pope said at his weekly general audience June 11.

The pope also launched an appeal to the international community to help safeguard children from forced labor, highlighting the plight of an estimated 160 million child workers worldwide.

Holding up a bright red leaflet, which had, in Italian, “All together against child labor” written on it, the pope asked the world community to help “eradicate this scourge.”

The leaflet was part of the International Labor Organization’s #RedCard campaign, urging people to “blow the whistle,” like a referee on a soccer field, and give a “red card” to those exploiting children.

Speaking at the end of his audience talk, the pope said June 12 was World Day Against Child Labor — a day meant to call attention to the millions of children forced to work in degrading conditions, “exposed to forms of slavery and exploitation, as well as abuse, maltreatment and discrimination.”

He called on everyone, especially families, to do all they could to safeguard “the dignity and possibility of a healthy upbringing” of all children so they could look to the future with hope.

During his main address, the pope wrapped up his series of audience talks about the seven gifts of the Holy Spirit: wisdom, understanding, counsel, fortitude, knowledge, piety and fear of the Lord. The pope dedicated his catechesis to the last of the gifts.

He said fear of the Lord isn’t about being afraid; it’s recognizing “how small we are before God” and his immense capacity to love and forgive.

The Holy Spirit’s gift of fear of the Lord helps people open their hearts and abandon themselves completely “with humility, respect and trust” to God, he said.

Jesus invites everyone to find “consolation and peace” by handing over “all of one’s worries and hopes to God” and letting oneself be embraced and supported “by his warmth and protection just like a child with his or her daddy,” the pope said.

A proper fear of God is a “docility” to God’s will that fills hearts with hope, he said.

“Many times, in fact, we aren’t able to understand God’s plan and we realize that we aren’t capable of ensuring our own happiness and eternal life.

“However, exactly by experiencing our limits and our deficiencies, the Spirit comforts us and lets us see that the only thing that’s important is letting ourselves be led by Christ into the arms of his Father.”

Filled with fear of the Lord, people will follow him “with humility, docility and obedience” in a way that isn’t fatalistic, passive or mournful, he said.

People’s hearts are filled with “wonder and joy, the joy of children who recognize they are helped and loved by the Father.”

Rather than “making us be timid and sheepish Christians, fear of the Lord generates courage and strength in us … making us be committed and enthusiastic Christians who aren’t submissive to the Lord out of fright, but because we are moved and bowled over by his love!”

However, the pope said, a sense of fear of the Lord is also an “alarm bell” that warns people of sin in their lives and reminds them that they will be held accountable.

“When a person lives in evil, when they blaspheme God’s name, when they exploit others, when they lord over others, when they live just for money, vanity, power and pride, then the blessed fear of God gives us a warning: Watch out! All of this power and money, with all of your pride and vanity, you will not be happy,” he said to applause.

The pope said many people don’t feel any fear of the Lord because their hearts have been hardened by corruption.

“I think of those who live (promoting) human trafficking and slave labor. Do you think these people have the fear of God in their hearts?” the pope asked.

“No, they have no fear of the Lord and they’re not happy,” he said, just like “those who manufacture arms to fuel wars.”

He said he was sure that no one in the square was involved in the arms industry because such people “do not come to listen to the Word of God. These people manufacture death, they are merchants of death!”

Pope Francis asked people to join in the cries of those in distress and accept the Holy Spirit’s gift to recognize the love and mercy of God, our Father.