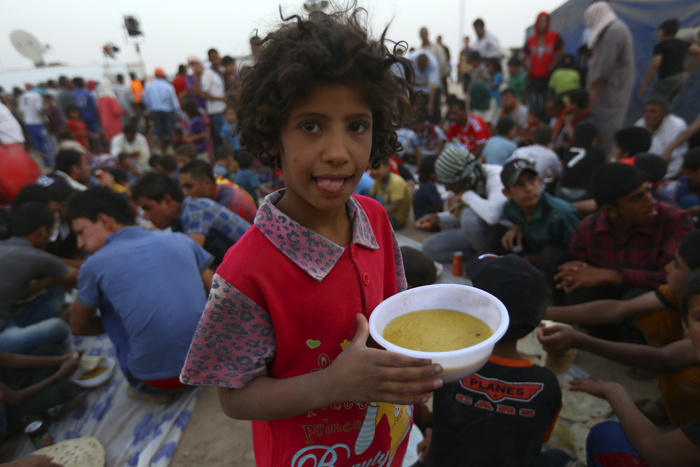 A child holds a bowl of soup inside the Khazer camp on the outskirts of Irbil, Iraq, June 29. (CNS photo/Stringer, Reuters) 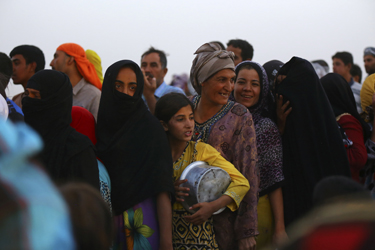 Iraqi refugees line up to receive free food inside the Khazer camp on the outskirts of Irbil, Iraq, June 29. (CNS photo/Stringer, Reuters)

Chaldean Catholic Archbishop Bashar Matte Warda told Catholic News Service that about “90 percent of the families are returning to the villages of Qaraqosh and Karamlish and environs after they received assurances that the area is once again safe.”

On June 28, Archbishop Warda expressed grave concern for more than 40,000 Christians that fled the Christian villages outside Mosul.

At the time most fled with just the clothes on their backs, while some who were still in their pajamas — a sign of their panic and desperation — narrowly escaped after militants from the Islamic State of Iraq and Syria laid siege to the area.

As violence continued to plague Syria and Iraq, Pope Francis pleaded for international action to promote dialogue, and he urged Catholics to pray particularly for Iraqi Christians forced to flee in late June.

“The news coming from Iraq is very painful, unfortunately,” the pope said June 29 after reciting the Angelus with visitors in St. Peter’s Square. “I join the bishops of the country appealing to government leaders that, through dialogue, national unity could be preserved and war avoided.”

“I am close to the thousands of families, especially Christians, who have had to leave their homes and are in serious danger,” the pope said.

Archbishop Warda told CNS that the Kurdish Peshmerga fighters assured the Christians that it was safe to return home. The Peshmerga has fought the Islamic State of Iraq and Syria and their Sunni Muslim Arab tribesmen trying to gain control of the area.

However, the cleric said that conditions in the region are still “difficult for the Christians because there is no water or electricity.”

He also said that some Christian families have chosen to leave Iraq entirely after this recent crisis, opting to emigrate to neighboring Turkey and Lebanon.

Iraq was thrown back into crisis in mid-June after thousands of armed members of the Islamic State of Iraq and Syria moved from Syria through much of northern Iraq, killing both Muslims and Christians. On June 29 they proclaimed a “caliphate,” an Islamic state led by a religious leader, across the territories they had captured.

At his early morning Mass in the chapel of his residence June 30, Pope Francis again urged prayers for Christians facing persecution, especially in the Middle East.

“There also are Christians chased out in an ‘elegant’ way with white gloves,” he said. “This, too, is persecution.”

Meanwhile, Chaldean Catholic Patriarch Louis Sako of Baghdad pleaded June 30 with Catholics outside Iraq to be careful accepting without verifying stories claiming the violence is being perpetrated “against Christians in a selective manner. I repeat that up until now, there have been no attacks aimed at those who bear the name of Christ. The Christians are sharing the anguish and suffering with their Muslim brothers and sisters.”

As Iraq faces the real possibility of war and being torn apart, “every manipulative alarmism” responds to a desire to play on people’s fears and “therefore, ends up aggravating the danger,” he told the Vatican’s Fides news agency.

Earlier, Syriac Catholic Archbishop Yohanna Moshe of Mosul told Fides that a lack of action on the part of the international community is “complicit with the crimes” being committed against innocent civilians caught in the path of the militants.

The majority of Qaraqosh’s 40,000 inhabitants are Syriac Catholics.

Christians have fled Iraq in massive numbers since the 2003 U.S.-led invasion and its aftermath. The country’s Christian community was estimated at 800,000 to 1.2 million people before the 2003 war that unleashed a wave of sectarian violence, but the current Christian population is thought to be less than half that number.

Many Christians took refuge in the Kurdistan region, where there was thought to be greater tolerance for other religions.

“We are trying to convince them not to leave,” Archbishop Warda said. “But they told me, ‘OK, bishop, who will secure our life …? We have no army to protect us.'”

“We are afraid that things will continue this way,” he said. “The people are worried. They are afraid. As bishops, we have urged all the parties involved to calm down.”

Syriac Bishop Barnaba Yousif Habash of Our Lady of Deliverance Eparchy of Newark, N.J., told CNS June 27 that he had spoken with family members after forces overran Qaraqosh. He said he heard the screams and cries of people in the background.

“There is no hope there,” he said.

He implored the United States and European nations to act to protect minority Christians in northern Iraq.

Contributing to this story were Cindy Wooden at the Vatican and Dennis Sadowski in Washington.