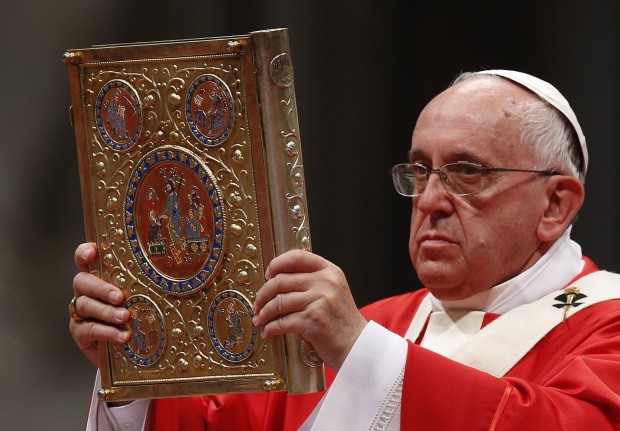 Pope Francis raises the Book of the Gospels as he celebrates a Mass marking the feast of Sts. Peter and Paul in St. Peter's Basilica at the Vatican June 29. (CNS photo/Paul Haring)

VATICAN CITY (CNS) — Many of today’s social ills are driven by a lack of adequate social policies and government support, not just selfishness and moral degradation, Pope Francis said.

And, he added, standing up for the poor and disenfranchised is not a sign of being a communist, but is the mark of a true Christian.

“The communists stole our cause. Rallying for the poor is Christian,” and it was so for 2,000 years before Karl Marx picked up on it, the pope said in an interview published June 29.

The interview published in the Rome newspaper, Il Messaggero, touched on the challenges of reforming the Roman Curia, the role of women in the church, the causes behind many of today’s social problems and Pope Francis’ vow to remain neutral during the World Cup soccer tournament.

He was cheering “for no one. Really. I promised the president of Brazil to stay neutral,” the pope — an avid soccer fan — told a reporter in an hourlong interview June 24, the day the Italian squad lost to Uruguay.

Seated in a small lounge inside the Domus Sanctae Marthae, where he lives, the pope said the biggest problem with politics around the world today “is that it is undervalued, ruined by corruption and the phenomenon of bribery.”

Pope Paul VI saw politics as “one of the highest forms of charity,” Pope Francis said, underlining that its task is “to safeguard the common good,” which includes “caring for human life, its dignity.”

If politics isn’t built on a foundation of service, “you cannot even understand politics’ identity” or essential nature, he said. “I’m not saying everyone is corrupt, but I think it is difficult to stay honest in politics” if people are surrounded by corruption.

“Sometimes there are people who would like to do things aboveboard, but then they find themselves in difficulty and it is as if they were swallowed up by an endemic phenomenon on multiple intersecting levels” of corruption.

Corruption is not something inherent to politics, he said, but when the world is experiencing “an epochal change, inclinations toward a certain moral deviation are stronger.”

One sign of moral degradation, he said, is the exploitation of young children.

“It’s heartbreaking,” he said. “Children are used for some kinds of manual labor because they have smaller hands. But children are also exploited sexually, in hotels” or on the streets.

He recalled that in Buenos Aires there were girls as young as 12 who were working as prostitutes.

But worse than that, he said, was “to see that the cars stopping were all high-powered vehicles driven by old men. They could have been their grandfathers.”

“In my opinion these people who do that to children are pedophiles,” he said.

“Good social policies” are essential for dealing with the problem, the pope said. People in political office need to “respond very clearly. For example, with social services that look after families to understand, to accompany them in overcoming difficult situations. The problem indicates a lack of social services in society.”

The church “must continue” its efforts of helping people in difficulty, but it’s “a tough job that requires a common effort,” he said.

The problem of low birth rates, particularly in Europe, is also a result of inadequate social policies, he said. “It’s as if Europe were tired of being a mother, preferring to be the granny.”

“Raising a family is hard work, sometimes salaries aren’t enough, (with paychecks) not lasting to the end of the month. People are afraid of losing their job or of not being able to pay rent. Social policies don’t help.”

“Much depends on the economic crises and not just on a cultural deviation marked by selfishness and hedonism,” he said. However, he noted that he had read recently that the top three expenses for people around the world were the basic necessities of food, clothes and medicine followed by “beauty care” and pets.

People desiring pets over children was another example of “cultural degradation,” he said, because an emotional bond or relationship “with animals is easier” and more easily controlled because “an animal isn’t free while a child is something more complex.”

Asked what he thought about people claiming he is a communist because of his remarks about poverty and helping the poor, the pope said the Gospel insists Christians concern themselves with the poor and those in need.

“The communists say all this is communist. Yeah, right, 20 centuries later. So when they talk (about the poor) people could say to them: ‘Well, you are Christians,'” he said, laughing.

The pope added: “Poverty is at the heart of the Gospel. You can’t understand the Gospel without understanding real poverty, taking into account that there also exists a very beautiful poverty of the spirit: to be poor before God so that God fills you.”

The Gospel speaks to both the rich and poor, he said. “It doesn’t condemn the rich. At most (it condemns) riches when they become the object of idolatry — the god of money, the golden calf.”

Pope Francis also said there is not enough discussion in the church about women, and “I agree that there must be more work on the theology of women.”

“Women are the most beautiful thing that God made. The church is female,” he said. There must be a “greater deepening” of understanding of femininity “or else one can’t understand the church herself.”

Concerning his ongoing reform of the Roman Curia, the pope said he was not carrying out some personal agenda, but was doing “what the cardinals requested during the general congregations before the conclave.”

Reforming the governing bodies of the church is not easy, he said, “because you move one step forward, but then it turns out you need to do this or that and if there was one dicastery before then they become four.”