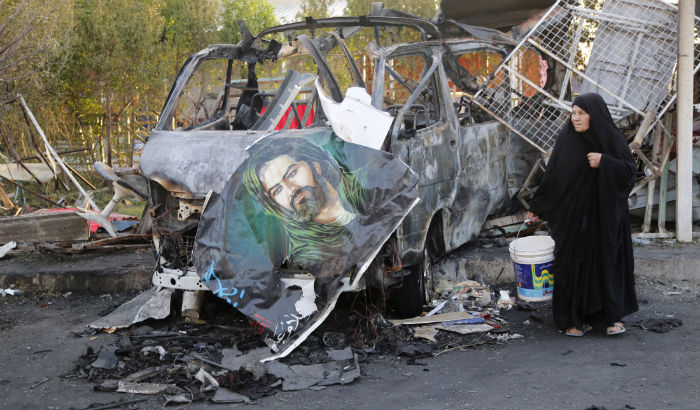 A woman walks past the site of a car bomb attack June 18 in Baghdad, Iraq. At least 13 people were killed and 30 others wounded in a car bomb explosion in Baghdad's mainly Shiite neighborhood of Sadr City, according to police and hospital officials. (CNS photo/Wissm al-Okili, Reuters)

Christians “are facing the biggest challenge for their survival on the lands of their forefathers in Iraq and Syria,” the patriarch told Catholic News Service June 18 by email from the patriarchate in Beirut.

“We are very anxious, even devastated, because of the horrendous news that keeps coming to us from Mosul (Iraq) and surrounding areas,” Patriarch Younan wrote.

His comments came as the militant Islamic State of Iraq and the Levant gained control of large areas of Syria and Iraq in a violent push through both countries in June.

Archbishop Jean Sleiman, the Latin-rite bishop of Baghdad, urged the international community not to intervene in the struggle against the militants, insisting that Iraqi leaders “work together” to overcome the crisis.

The Islamic State of Iraq and the Levant includes thousands of fighters and has readily killed Muslims and Christians while functioning with military efficiency.

Earlier, Archbishop Jean Sleiman, the Latin-rite bishop of Baghdad, urged the international community not to intervene in the struggle against the militants, insisting that the priority is for Iraqi leaders to “work together” to overcome the crisis.

In an interview from Baghdad with the charitable organization Aid to the Church in Need, Archbishop Sleiman stressed that political consensus within Iraq would be critical in overcoming the Islamic State of Iraq and the Levant.

Archbishop Sleiman described how many people were trying to leave the Iraqi capital, fearing an attack from the militant forces as reports that armed fighters were pressing south. He said many roads out of the capital were blocked and departures from Baghdad’s airport were fully booked until the end of June.

Patriarch Younan told CNS that following the exodus of the large majority of civilians from Mosul, Iraq’s second-largest city, “Christians had no other alternative” than to flee to safer areas, including the neighboring Nineveh Plain and Kurdistan in northern Iraq.

“What we mostly feared in similar scenarios was the chaos following the retreat of government forces and the invasion of jihadist-organized militias, that obviously results in mass murders, killings, kidnappings as well as the attacks on religious houses, including churches, monasteries and convents,” he said.

“In the face of this new drama that now engulfs Iraq after Syria, we, Christians of the Middle East, see ourselves abandoned, even betrayed, by the so-called civilized countries of the West. The politicians over there have adopted confusing responses to the rise of Islamic fundamentalism, and for opportunistic reasons, have forgotten their principles of democracy, separation of state and religion and the respect of civil liberties for all minorities, women and the most vulnerable ones,” Patriarch Younan said.

“For years, Christian leaders had in vain warned the Western politicians not to foster violent uprisings based principally on sectarian religious grounds, as it was expected of the so-called Arab Spring,” the patriarch said. “Now we harvest the horrendous results of that macabre Machiavellian strategy.”

The turmoil in Iraq has been felt in Kerala state in India as 65 nurses — the majority of them Catholic — remained trapped in Mosul and Tikrit.

Marina Jose, a stranded Catholic nurse in Mosul, told the NDTV news June 17 that the group was safe in a hospital despite gunmen on the ground floor and sounds of shooting and bomb blasts outside.

“We don’t know how we can get out from here,” Jose said.

Amid the growing tension over the welfare of the stranded nurses, the Non-Resident Keralites Affairs Department opened a 24-hour helpline to support the distraught families.

Contributing to this story was Anto Akkara in Bangalore, India.

PREVIOUS: None of your business? How church and finance may profit together

NEXT: Refugees in Jordan say they never thought they would have to leave home