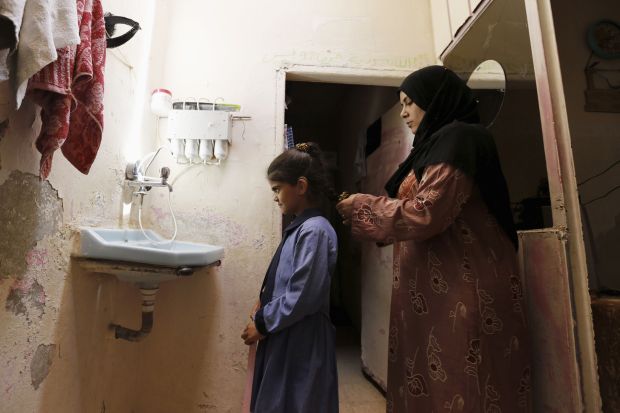 Rana, a 31-year-old a Syrian refugee living in Jordan, adjusts her 8-year-old daughter's hair at their home at a refugee camp in Amman May 2. (CNS photo/Muhammad Hamed, Reuters)

AMMAN, Jordan (CNS) — Desperate to reunite with family in Europe, a young Syrian refugee recently paid thousands of dollars to a human trafficker to help him and his brother travel abroad. Instead, the pair found themselves tricked, half-way on the opposite side of the world — in China.

Back in Jordan, with their life savings of $34,000 wasted, they almost gave up hope of seeing their mother again and the chance to start a new life.

Some refugees may consider the pair lucky that they are still alive as so many the world over have perished trying to flee to safety from conflict. They are remembered on World Refugee Day June 20.

The brothers were trying their luck again and were about to fly to Istanbul in search of yet another way to reach their family. Moussa said he was hoping to be luckier the second time around.

“I studied English at college, while holding down a job as a salesman back home. My future was bright,” said Moussa, a 33-year-old Catholic man from Syria’s northern town of Qamishli.

“We had to flee Syria because of the dangers of kidnapping and killing of Christians by militants,” he told Catholic News Service.

Moussa escaped with his brother to Jordan in the hopes of reuniting with family in Europe.

Frustrated about his unfilled dreams, he seemed almost willing to do anything to change his current circumstances, including another attempt with a people smuggler.

He had been sleeping in a room the size of a small closet in one of the Jordanian capital’s churches, perched high up on a hill overlooking the white limestone cityscape. The church also shelters other Syrian refugees.

“The Jordanian government doesn’t let Syrians work. I feel like my life is passing me by,” the depressed man said.

“Now, my life is sleeping and thinking. I don’t know. It’s just like that. It’s difficult,” he said, his eyes tearing up. “I want to continue my studies, get a job, marry and start a family, like anyone else.”

As Syria’s civil war grinds into its fourth year, Moussa is among the 600,000 Syrians registered with the United Nations in Jordan. But authorities say there are more than 1 million Syrians sheltering here, besides the more than 300,000 Iraqi refugees in the country, and their numbers, too, are growing as the Islamic State of Iraq and the Levant militants sweep through the north and center of the beleaguered country.

The huge numbers, in addition to half of the country’s population of Palestinian origin, make Jordan the prime destination for refugees fleeing Mideast conflicts.

Father Khalil Jaar, who is responsible for much of the church’s care for Iraqi and Syrian refugees in the Jordanian capital, Amman, understands the plight faced by Moussa and other the refugees.

A native of Bethlehem, West Bank, the Catholic priest said his Palestinian family fled to Jordan decades ago because of conflict with Israel.

“I was a refugee myself. I am the son of Palestinian refugees,” Father Jaar told CNS.

“I tell the refugees that they should not be shy or ashamed to receive help. The Lord provided people to care for my family. I now care for you and, someday, you may care for someone else,” the priest said. “Above all, it is important to protect human dignity.”

In this same vein, Pope Francis provided three tons of food for these refugees during his recent pilgrimage to Jordan and the Holy Land and met many, listening with care to their difficult stories as he visited the site where Jesus is believed to have been baptized at the River Jordan.

A 45-year-old Syrian woman, who for three months has sheltered in Jordan’s largest refugee camp in Zaatari, near the northern border with Syria, told CNS that she is stunned by her present circumstances.

“Never in my life could I ever imagine that I would become a refugee,” said Um Hussein, whose family of 10 now struggles to survive in two small tents, after fleeing bombardment and destruction outside the capital, Damascus.

“I never ever thought of leaving my homeland, let alone my town, and I certainly could not imagine that I would leave my house,” said the woman, clothed in a long black dress and wearing an Islamic headscarf as she spoke in one of the camp’s dusty, unpaved streets.

“We had a good life full of family and friends and, of course, the basics which everybody takes for granted: electricity, heating, water,” she said. “But above all, we had security and safety. That’s one of the most important things in life, and we lost it.”

“Of course, we would love to return to Syria. We would do it today, if it were possible. If there were security, we would go back because this is absolutely necessary for our children,” she emphasized.

“There is no hope now, not only for the Christians, but for others in the Middle East buffeted by war in the region,” said Khalid al-Mukhtar, an Iraqi Chaldean Catholic surgeon, who escaped with his family to Amman, from the capital, Baghdad.

“There is no guarantee of peace. We are happy here in Jordan, because we have peace and security,” he said. “We have King Abdullah and that’s the only thing that will keep us here but, in the future, we plan to live abroad and raise my children there.”

“Whether Syria, Iraq, even Lebanon, maybe that feeling is the same for all of us,” the young man said, struggling with the waiting.

“Of course, I hope Syria will come back like it was before. But the current situation doesn’t seem to indicate that. I don’t trust the future,” he said.