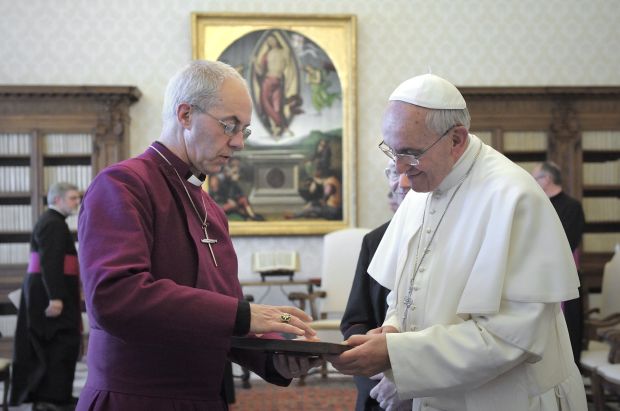 VATICAN CITY (CNS) — Although they have not yet reached full unity, Roman Catholics and Anglicans continue their dialogue, come together in prayer and work side by side, including on a new project to combat human trafficking around the world.

“I thank God that, as disciples sent to heal a wounded world, we stand together with perseverance and determination in opposing this grave evil,” Pope Francis told Anglican Archbishop Justin Welby of Canterbury June 16 during a meeting at the Vatican.

Archbishop Welby, the spiritual leader of the worldwide Anglican Communion, was in Rome to hold his second meeting with Pope Francis, to visit Anglican communities in the city and to participate in a meeting of the Global Freedom Network, which they and other faith leaders founded to combat human trafficking and modern slavery.

“The Global Freedom Network can achieve much practically to dismantle what you have so often rightly said is a grave crime against humanity,” Archbishop Welby told the pope. “It is a crime that we all need to overcome as a matter of urgency, as a matter of human dignity, freedom and wholeness of life. May God give us the resolve and cooperation we need together.”

Archbishop Welby participated in a meeting June 15 with the chairman of the network’s board and several cardinals who are members of its council. According to Vatican Radio, one of the topics for discussion was strategizing ways to ensure the churches “slavery proof” their own chain of suppliers, ensuring that any company they do business with treats its employees fairly.

In his meeting with the archbishop, Pope Francis said Jesus’ question to the disciples in Capernaum, “What were you arguing about on the way?” could apply to the Roman Catholic and Anglican churches as well.

“When Jesus put this question to his disciples, they were silent,” the pope said. “They were ashamed, for they had been arguing about who was the greatest among them. We, too, feel ashamed when we ponder the distance between the Lord’s call and our meager response.”

Under God’s merciful gaze, he said, “we cannot claim that our division is anything less than a scandal and an obstacle to our proclaiming the Gospel of salvation to the world.”

Pope Francis and Archbishop Welby acknowledged the differences that still divide Catholics and Anglicans, but they reaffirmed their support for the Anglican-Roman Catholic International Commission, which is their official theological dialogue body, and for the International Anglican-Roman Catholic Commission for Unity and Mission, which promotes joint prayer and common activities.

While in Rome, Archbishop Welby officially launched the commission’s website — www.iarccum.org — which includes descriptions of the two bodies, the joint statements they have issued over the past 50 years and thousands of historical documents related to the official dialogue. The website also includes information from about a dozen national Anglican-Roman Catholic dialogue committees.

Archbishop Welby also met briefly with members of the St. Peter’s Cricket Club, the team of Catholic priests and seminarians who will face a team from the Anglican Church in England in September.

In an interview with Vatican Radio, the archbishop said he was visiting the Vatican in order to build on his relationship with the pope and promote continued joint action, particularly on behalf of those who are suffering. “I think the churches are called by Christ to be reconciled reconcilers; to be those who reach out in reconciliation.”

He described as “absurd” the idea that the churches will settle for joint action on issues related to social justice and peace at a time when they find their theological dialogue difficult. “The dialogue has not come to a standstill,” he said, both international commissions are engaged in “very serious dialogue.”

“We are children of God. We are called together to deepen our understanding of how we are to live as God’s children in this world, loving one another and loving the world as he did,” the archbishop said. Both the theological dialogue and practical initiatives are necessary, he added.

NEXT: Pope appeals for peace in Iraq, announces plans to visit Albania