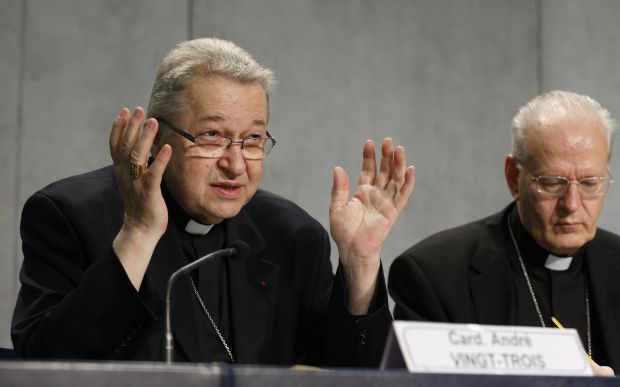 Cardinal Andre Vingt-Trois of Paris, one of three cardinals Pope Francis chose to serve as presidents of the extraordinary Synod of Bishops on the family, speaks during a press conference at the Vatican June 26. (CNS photo/Paul Haring)

VATICAN CITY (CNS) — The working document for the October 2014 extraordinary Synod of Bishops offers a picture of the Catholic Church today struggling to preach the Gospel and transmit moral teachings amid a “widespread cultural, social and spiritual crisis” of the family.

The 75-page “instrumentum laboris,” published by the Vatican June 26, is supposed to “provide an initial reference point” for discussion at the synod, whose theme will be the “pastoral challenges of the family in the context of evangelization.”

(See a related story on the synod’s connection to the 2015 World Meeting of Families in Philadelphia.)

The document is based principally on comments solicited in a questionnaire last November from national bishops’ conferences around the world. But it also reflects comments sent directly to the Vatican by individuals and groups responding to the questionnaire, which was widely published on the Internet.

Topics in the working document include some of the most contested and controversial areas of Catholic moral teaching on the family, including contraception, divorce and remarriage, same-sex marriage, premarital sex and in vitro fertilization.

Bishops’ conferences responding to the questionnaire attributed an increasing disregard of such teachings to a variety influences, including “hedonistic culture; relativism; materialism; individualism; (and) the growing secularism.”

Recognizing that most Catholic couples do not follow the church’s teaching against the use of artificial birth control, the document says that “for many Catholics the concept of ‘responsible parenthood’ encompasses the shared responsibility in conscience to choose the most appropriate method of birth control.”

The document says the use of natural family planning, condoned by the church, encourages responsible decisions about family size while respecting human fertility and “the dignity of the sexual relationship between husband and wife.”

Bishops expressed particular concern with the “ideology called gender theory, according to which the gender of each individual turns out to be simply the product of social conditioning and needs” without “any correspondence to a person’s biological sexuality.”

The bishops see a need for better teaching of “Christian anthropology,” the document states. Noting that contemporary culture dismisses or misunderstands theories of “natural law,” which seek to “found human rights on reason,” bishops increasingly prefer to invoke Scripture in support of Catholic moral teaching.

The document also points to economic factors behind Catholics’ disregard of that teaching: Cohabitation without marriage can be driven by financial need; youth unemployment; and a lack of housing.” A widespread “contraceptive mentality” reflects, in part, a shortage of “child care, flexible working hours (and) parental leave.” Long working hours and commuting times “take a toll on family relationships.”

“The church is called to offer real support for decent jobs, just wages and a fiscal policy favoring the family as well as programs of assistance to families and children,” the document states.

The document refers briefly to scandals over the sexual abuse of children by priests, which it says “significantly weaken the church’s moral credibility,” as do other forms of “counter-witness in the church,” including the lavish lifestyles of some clergy and unwelcoming attitudes in some parishes toward separated, divorced or single parents.

The bishops recognize the challenges of ministering to growing numbers of people in such “irregular” situations, including divorced Catholics who have remarried civilly without obtaining an annulment of their first marriage, leaving them ineligible to receive Communion.

Their predicament, which Pope Francis has said exemplifies a special need for mercy in the church today, has been a topic of unusually open debate at the highest levels of the church over the last year.

Many in such situations feel “frustrated and marginalized,” the document states, noting proposals for rendering the annulment process simpler and quicker — and warnings that such streamlining might obscure church doctrine on the indissolubility of marriage.

The document also notes proposals that the Catholic Church consider adopting Orthodox practice, which allows for second and even third marriages under certain circumstances.

On the other hand, some bishops and others “want to see more attention given to separated and divorced persons who have not remarried but have remained faithful to their nuptial vows,” and who often “have the added suffering of not being given proper care by the church and thus overlooked.”

The document draws a connection between family breakdown and a “crisis of faith,” noting that, with the increase in single-parent households, many children now miss experiencing the “love of a father, thereby making it particularly difficult to experience God’s love and him as Father.”

Regarding unions between partners of the same sex, bishops around the world “are trying to find a balance between the church’s teaching on the family and a respectful, non-judgmental attitude toward people living in such unions.”

“A distinction must be made between those who have made a personal, and often painful, choice and live that choice discreetly so as not to give scandal to others, and those whose behavior promotes and actively — often aggressively — calls attention to it,” the document states.

While opposing adoption of children by same-sex couples, almost all bishops said they would greet requests to baptize children living with such couples “with the same care, tenderness and concern which is given to other children.”

The document states that children of parents in “irregular” situations should also feel welcome in Catholic schools, where “words and expressions need to be used which create a sense of belonging and not exclusion … fully aware that ‘irregular’ is a word applied to situations, not persons.”

“Children or young people are not to blame for the choices and living situations of their parents,” the document states. It adds that excessive rigidity in such matters runs the risk of “making an unjust distinction between different morally unacceptable situations,” for instance, by punishing children of an invalid marriage but not those whose parents “live a life of crime and exploitation.”

PREVIOUS: Fall synod to review state of family; 2015 synod to draw up proposals