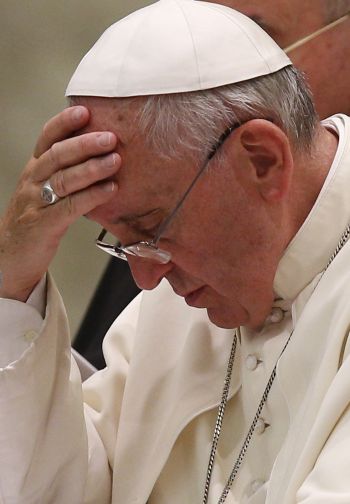 ROME (CNS) — At the exact moment Pope Francis was scheduled to leave the Vatican to travel to Rome’s Catholic University of the Sacred Heart and its Gemelli Hospital, patients and staff were told the pope had to postpone his visit because he was not feeling well.

“Because of a sudden ailment, the Holy Father will not go to the Gemelli for the announced visit,” Jesuit Father Federico Lombardi, Vatican spokesman, said a few minutes later. He declined to give more information about the pope’s condition.

Staff members, patients and their families were already gathered in the hospital lobby waiting for the pope to arrive. Pediatric patients were seated in the lobby and a microphone for the 77-year-old pope was ready. Domenico Gianni, the head of Vatican security who often travels with the pope, and other officers, as well as photographers from the Vatican newspaper also were waiting.

The spokesman said the visit would be rescheduled.

Several hours after announcing the pope would not go to Gemelli, Father Lombardi issued a brief note confirming Pope Francis’ commitments for the next two days, including the June 29 Mass for the feast of SS. Peter and Paul. At the Mass each year, popes give the pallium — a woolen band worn around the shoulders — to new archbishops.

“There is no reason to be worried about the pope’s health,” Father Lombardi said.

At least four times in the past seven months, Pope Francis has canceled appointments because he wasn’t feeling well. In December, the pope postponed a meeting with Cardinal Angelo Scola of Milan and organizers of the World Expo that will be held there. In February, at the last minute, the Vatican said he was ill, so he canceled a visit to Rome’s major seminary.

His scheduled May 18 visit to Rome’s Shrine of Our Lady of Divine Love was canceled so the pope could rest before going to the Holy Land May 24-26. Most of his appointments June 9 were canceled because he wasn’t feeling well.

Cardinal Scola presided at the Mass Pope Francis had been scheduled to celebrate at the Catholic University of the Sacred Heart and read the homily the pope had prepared.

In the text, Pope Francis had written that a Christian should see his or her life as an opportunity to witness God’s love by humbly serving and caring for others. The day’s feast of the Sacred Heart of Jesus, he said, was an occasion to reflect on how well one loves others. Is one consistent or “do I follow my moods and my fondness” for certain people?

The homily focused on Jesus’ sacred heart as a sign and symbol of God’s faithful, immeasurable love.

“God has set his heart on us, he has chosen us, and this bond is forever, not because we are faithful, but because the Lord is faithful and puts up with our infidelity, our slowness and our failures,” the text said.

“We can experience and taste the tenderness of this love at every stage of our lives, in times of joy as well as sadness, in times of health as well as in sickness,” Pope Francis had written.

Contributing to this story was Paul Haring at Gemelli Hospital.