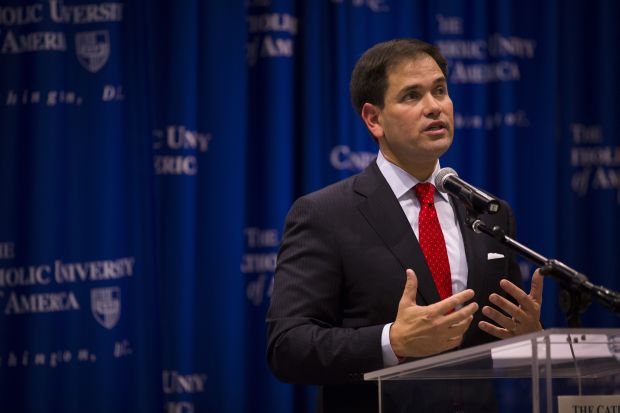 WASHINGTON (CNS) — U.S. Sen. Marco Rubio of Florida said that growing up in a “strong and stable family” has given him an advantage in life because he was “taught certain values that result in success.”

“My background is certainly not one of privilege. My parents migrated here, worked service sector jobs,” the junior Republican senator told a standing-room crowd. “Yet I consider myself a child of privilege because I was raised by two parents who were married, who instilled in (us) that we would get an education, find careers and start families of our own.”

In a policy address at The Catholic University of America July 23, Rubio spoke on cultural and societal values in America and emphasized the connection between a moral society and economic prosperity.

He noted statistics that show individuals who follow what he called a “success sequence” of getting an education, finding a job, getting married and then starting a family are more likely to stay out of poverty and achieve economic security.

But each element of this success sequence, he said, “is eroding in our country.”

“Many either can’t find a good job or have quit looking. Marriage rates are on a steep decline, and a higher proportion of children are raised in single-parent households,” he said.

“Too often in modern politics, debates about values have been viewed as distractions or wedges in discussion — (but) the social and moral well-being of our people has a direct and consequential impact on their economic well-being.”

Rubio addressed the breakdown of each element of the “success sequence” individually, and offered solutions.

He lamented how limited access to education — especially higher education — has a detrimental impact on children of low income households.

“In the 20th century, a good education is not an option. It’s a necessity. The government needs to allow parents to choose what schools are right for (their children).”

He discussed various reforms he supports in order to increase access to and affordability of higher education, and noted how greater access to better education will be the basis of a stronger workforce.

“We (must) reform how we fight poverty,” he said. “The current programs are incomplete and don’t do enough to cure it. The best cure is a good paying job. Our anti-poverty programs must incentivize work.”

In keeping with the small government principles of his political party, the senator noted that these innovations “won’t come from federal government — only states and local communities have been able to craft and execute effective programs.”

Rubio discussed at length the relationship between marriage, family and economic security.

“The link between marriage and economic security is undeniable,” he said. “Having an active father makes children 98 percent more likely to graduate from college. But today, a growing number (of children) are growing up without both parents.”

He voiced support for making the tax code more “pro-family” by eliminating policies that “punish marriage.”

Rubio also empathized with parents that hold low paying jobs with little flexibility. “We need to allow parents to spend more time with their kids in exchange for overtime,” he said, noting the importance of work flexibility when it comes to single parents.

The senator voiced support for single parent families and the need to make educational opportunities, such as affordable online programs, more accessible for those parents looking to return to school.

“We (must) encourage and strengthen two parent homes,” Rubio said, “but also help children born into these circumstances (single-parent, low-income homes). If we do not, most will simply not have the same opportunities to succeed as those born into strong and stable families.”

Rubio, a Catholic, stated that “unborn children should be welcomed in life and protected in law. It seems to me a decent society will find a tangible way to help mothers.”

Rubio also took the opportunity toward the end of his speech to voice his support of traditional marriage.

Rubio concluded with a call to unity around the American idea that “everyone deserves the chance to go as far as their dreams, their work and their talent will take them.”