Archbishop says neither church nor courts can change nature of marriage 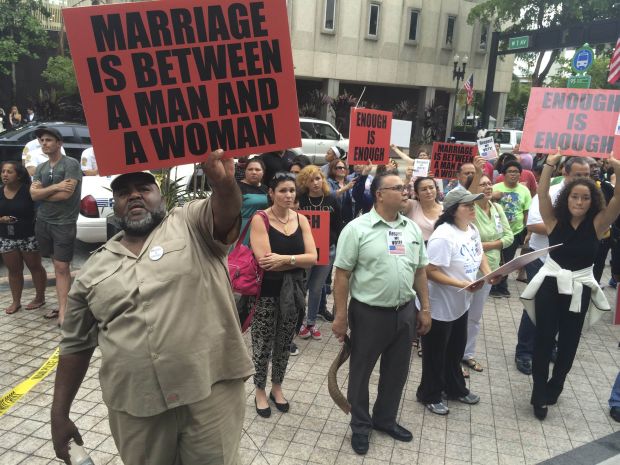 MIAMI (CNS) — A Florida county judge’s ruling that same-sex couples have a right to marry “represents another salvo in the ‘culture wars’ that ultimately seek to redefine the institution of marriage as solely for adult gratification,” said Miami’s archbishop.

Across the country a day later, a three-judge panel of the 10th U.S. Circuit Court of Appeals in Denver upheld rulings that struck down Oklahoma’s same-sex marriage ban.

Garcia’s decision came in a lawsuit brought by same-sex couples in the Florida Keys who challenged a voter-approved state constitution defining marriage as solely between a man and a woman. The judge said the amendment, passed in 2008, violates the right of homosexual couples to marry. His ruling in Huntsman v. Heavilin applies only to Monroe County.

“While Judge Garcia spoke of ‘rights,’ the Catholic Church speaks of ‘right,” Archbishop Wenski said in a July 18 statement. “Marriage, a union between one man and one woman and any children that arise from that union, is an institution that precedes church and state; therefore neither church nor state has any authority to change the nature of marriage.

“Since time immemorial, marriage has been primarily about the raising of children, who seem to be hardwired to be best raised by a father and a mother who are married to each other,” he continued. “Regardless of Catholic moral teaching on the subject, society has a legitimate interest in preserving marriage as a way of investing in the future of society by providing for the human flourishing of upcoming generations.”

The Catholic Church opposes same-sex marriage and teaches that any sexual activity outside of marriage is sinful. But it also teaches that the dignity of homosexual individuals must be respected as well as their rights as people, such as the right to employment and freedom from unjust discrimination.

Archbishop Wenski in his statement reiterated that the church church’s “affirmation of marriage as being between a man and a woman is not motivated by unjust discrimination or animosity toward anyone. Human dignity is manifested in all persons; and all have the capacity for and are deserving of love.”

The U.S. Catholic bishops, he added, “will continue to promote the truth of marriage, its foundational significance to society, and its importance to children.”

In Florida, there is no legal recognition for same-sex couples on the state level. Lawsuits that have been filed challenging the state law protecting traditional marriage include Pareto v. Ruvin, filed in the 11th Judicial Circuit Court of Florida in January by six same-sex couples, some of whom have children or grandchildren.

The Florida Conference of Catholic Bishops has filed an amicus curiae brief with the U.S. District Court for the Northern District of Florida in the case of Brenner v. Scott. The plaintiffs, a same-sex couple married in Canada in 2009, want to have their marriage recognized in the state of Florida. The case has been joined with Grimsley v. Scott, brought by eight legally married same-sex couples, challenging the state of Florida’s refusal to recognize their marriages.

The 2-1 ruling on Oklahoma’s law came from the same three-judge panel that ruled June 25 that states could not deprive people of the right to marry because they chose partners of the same sex. It affected Utah, Colorado, Kansas, New Mexico, Oklahoma and Wyoming. Utah and Oklahoma were the first to appeal that earlier ruling.

PREVIOUS: Plight of unaccompanied minors at forefront of Mass in Los Angeles