Plight of unaccompanied minors at forefront of Mass in Los Angeles 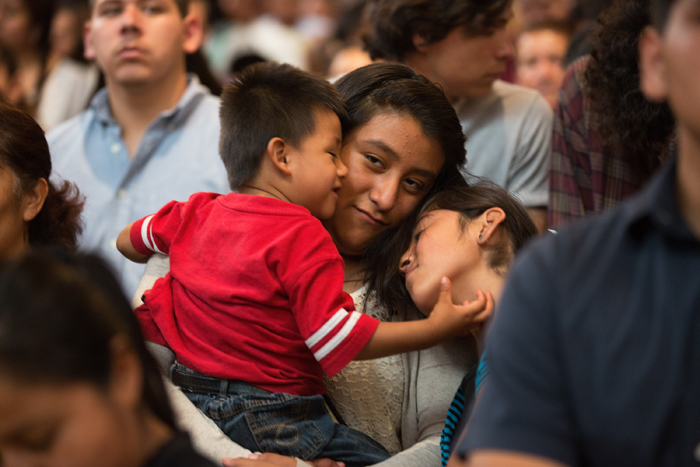 A woman holds onto her children during a special Mass in Los Angeles July 20 remembering immigrants and to focus attention on the humanitarian crisis of tens of thousands unaccompanied migrant children surging across the U.S.-Mexico border. (CNS photo/Victor Aleman, Vida-Nueva.com) 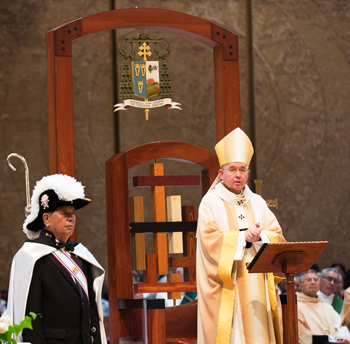 Archbishop Jose H. Gomez of Los Angeles concelebrates a Mass July 20 at the Cathedral of Our Lady of Angels in Los Angeles. (CNS photo/Victor Aleman, Vida-Nueva.com)

“We celebrate the immigrant spirit that gives life to our great country and our great city,” the archbishop said in his homily during the Mass at the Cathedral of Our Lady of the Angels.

“As we all know, this land was built by the blood and sacrifice and the vision of missionaries and immigrants from every race and language and every nation,” he said.

“Today we give thanks for all those men and women who left the places where they were born — to bring their faith and values, their talents and gifts — to create a new life and a new world here in America,” he added. “We thank God also for the spirit of our new immigrants — those who are joining us every day to be our neighbors and friends and family members.”

Concelebrating with Archbishop Gomez were Bishop Gerald R. Barnes of San Bernardino, Bishop Kevin W. Vann of Orange, as well as Los Angeles auxiliary bishops and a number of priests.

The Mass included testimonials from a number of recently arrived immigrants and the veneration of a relic of Santo Toribio, a beloved saint of immigrants and border crossers.

The relic, a bone from the saint’s left ankle, is encased in a 4-foot-5 statue of the saint, which was lent to the Archdiocese of Los Angeles by the saint’s home chapel in the state of Jalisco, Mexico. The Mexican-born martyred priest is venerated by immigrants for helping them reach the “dreamed land” safely and achieving success in the United States.

The relic arrived in Southern California July 7 and traveled around various parishes, ending its tour at the cathedral.

“All of us today, I know, are thinking about the tens of thousands of children who have been coming across our borders … sent by their parents who are trying to save them from the poverty and violence in their home countries,” Archbishop Gomez said in his homily, delivered in English and Spanish.

“I can’t imagine how sad and desperate it must be for those mothers and fathers to have to make that kind of decision!” he added.

He said “there are real troubles in our land … many things that are not right in our cities and in our country. Year after year, more of our fellow citizens seem to be losing faith in the spirit of America, losing their faith in the immigrant spirit that makes this country great.”

The “hearts and hands” of Americans “have always been open to welcome the stranger and the refugee,” he said. “But we are not being so welcoming anymore.”

He quoted Pope Francis, who called the border situation a “humanitarian emergency.”

“Pope Francis is right,” Archbishop Gomez continued. “And in the face of this emergency, our first duty must be to protect these children. My brothers and sisters, what we are doing for these children as a church — it’s not about politics. We all know that. It’s about who we are as Catholics.”

He urged Catholics to “pray for the courage to follow Jesus — just as Santo Toribio did. Without counting the cost, with love for God and love for our brothers and sisters.”

Born in 1900, Toribio Romo was a Catholic priest and martyr during the Cristero War, an uprising against Mexico’s anti-Catholic government. He was killed in 1928 by federal troops for defending his religious faith. He was canonized on May 21, 2000, by Pope John Paul II.

He urged all to keep praying and working for immigration reform, because it is “a life issue and it is a family issue. And it is a question of our soul as Catholics and Americans.”

“Let us pray to rediscover our capacity to care for one another and to be close to others in their sufferings,” Archbishop Gomez concluded. “Let us pray for greater tenderness and understanding for our immigrant families and children, and especially for the young people who have come to our country in recent months.” 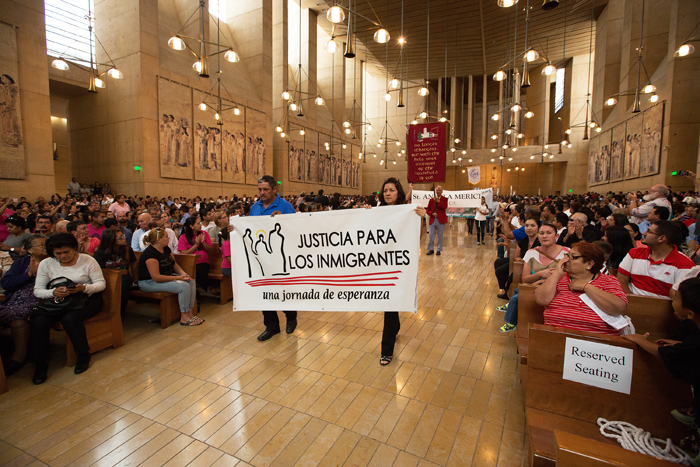 Participants in July 20 Mass remembering immigrants process up the center aisle of the Cathedral of Our Lady of the Angels in Los Angeles. (CNS photo/Victor Aleman, Vida-Nueva.com)

NEXT: Archbishop says neither church nor courts can change nature of marriage