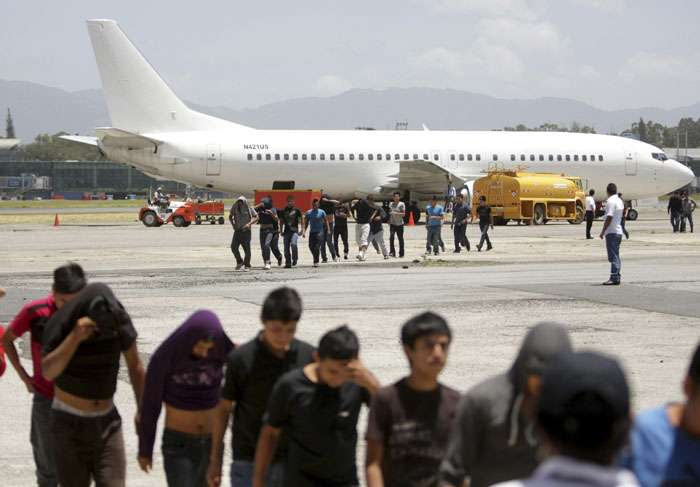 Migrants from Guatemala deported from the U.S. arrive at La Aurora International Airport in Guatemala City July 10. A growing wave of families and unaccompanied minors fleeing Guatemala, El Salvador and Honduras are streaming by the thousands into the U.S. (CNS photo/Pakal Koban, Reuters)

WASHINGTON (CNS) — With six weeks of steady reporting about the influx of Central American children and families crossing the U.S. border and no quick solutions being presented for what will happen to them, many people are asking their churches and dioceses what they can do to help.

Unlike what would happen if a natural disaster generated a similar flow of migrants — more than 57,000 children on their own and 39,000 families since the beginning of the fiscal year in October — these people are at least temporarily the responsibility of the federal government, because they were apprehended by or turned themselves in to the Border Patrol.

In the short term, that ensures that the migrants’ immediate needs for shelter, medical care and food are being met, even if that sometimes is under less-than-desirable conditions such as Border Patrol warehouses designed to hold adults for a few hours at most. But it also creates extra layers of procedure that complicate how people who want to help can do so.

For example, organizations that have attempted to provide various kinds of assistance in the Border Patrol’s temporary holding areas have been rebuffed in several parts of the country, told that security concerns make any kind of outside efforts unwelcome. Children who arrive alone are required by federal law to be cared for by the federal Office of Refugee Resettlement under Health and Human Services, which manages their care after the Border Patrol initially processes them.

In a July 10 panel discussion during the National Migration Conference in Washington, some of the possible ways volunteers, financial donations and other types of resources might be put to use were outlined by representatives of Catholic Relief Services, Catholic Charities USA, the Catholic Legal Immigration Network, and Migration and Refugee Services of the U.S. Conference of Catholic Bishops.

At the institutional level, the agencies are involved in efforts including: helping find housing, pressuring Congress to fully fund appropriations to cover the costs of caring for the migrants and for a range of services including legal assistance and boosting staffing for processing deportation cases and asylum claims.

The panelists raised possibilities for how the public can help, among them:

— Programs such as those in place in the Diocese of Brownsville, Texas, which has been offering respite and short-term shelter for families who have been processed by the Border Patrol, given orders to appear for deportation proceedings and released, typically at urban bus stations.

Local Catholic community services agencies should have information about what, if any, efforts are underway locally. Nationally, Catholic Charities USA is accepting donations through its website to support its migrant-related disaster relief efforts, which operate through local agencies.

Katie Oldaker, disaster services director for Catholic Charities USA, said the type of volunteer help needed ranges from counselors to “someone to smile, welcome them, and say ‘we’ll take care of you.'”

Sacred Heart Church in McAllen, Texas, has information on its web page about what kinds of help it needs for its migrant assistance center. It is collaborating with the local community food bank to gather and distribute specific needed items, for example.

— Efforts to open housing in places such as dormitories, camps and private residences, for families under detention and unaccompanied minors.

The federal Office of Refugee Resettlement, known as ORR, is legally required to care for unaccompanied minors until they can be placed with a family member or in some type of a foster care setting.

Until such longer-term arrangements can be vetted and approved, ORR has been trying to arrange for group housing around the country. Initial inquiries about some such housing arrangements, such as at a closed college in southern Virginia and at a former Army Reserve center in central Maryland, were met with community opposition and the efforts stopped.

Oldaker said that “at last count 4,000 kids were waiting for a bed.” Most of those are being housed in Department of Defense facilities, she said.

Her office has been serving as an intermediary between federal agencies, “translating disaster-speak” into the terminology familiar to HHS, and helping ensure that needs for case managers and counselors are a part of considerations, she said.

— Assisting with legal representation by helping legal services organizations conduct screening interviews or assisting with filing paperwork. The Catholic Legal Immigration Network has a free online webinar available that discusses why the unaccompanied children come to the United States, where they are staying, what services the church is providing and how individuals and congregations can help.

— Also among actions encouraged by faith-based organizations, advocacy, particularly contacting members of Congress and the White House, encouraging approval of funding to support the relief efforts and weighing in on proposals to change federal law that relates to unaccompanied minors from Central America.

Action alerts from the Columban Fathers, the Jesuits and others provide simple ways for sending messages to political leaders.

“I’m sorry it took a humanitarian crisis for the U.S. general population to be attentive to this,” said Jill Marie Gershutz Bell, a CRS legislative affairs specialist.

She described several CRS programs in Central America that try to help youths complete their education and get job training, to help small farmers consolidate their resources to improve their income and to help people who have been deported get safely resettled in their home countries.

— The California Endowment has created a web page at TheyAreChildren.com that may be used to send messages of support and encouragement to the unaccompanied children. The organization will take the letters, translate them if needed, and deliver them to children through social service providers.