For Clavius Group, mathematics a means to explore mystery of God 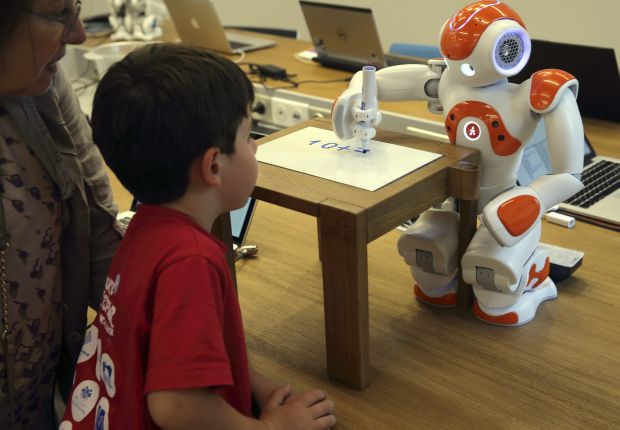 A child looks at a humanoid robot "Nao" doing math at a Aldebaran Robotics workshop during its opening week in Issy-les-Moulineaux near Paris July 2. (CNS photo/Philippe Wojazer, Reuters)

Mathematics, Father Jacob finds, is another means to explore the mystery of God.

Father Jacob, 38, credits his involvement with the Clavius Group, an organization of about 30 Catholic mathematicians from around the world, for deepening his appreciation of God’s presence in the universe as new understandings of mathematical concepts are uncovered.

The group is named for Jesuit Father Christopher Clavius, a 16th-century German mathematician and astronomer. He was the senior mathematician on the Vatican’s commission for the reform of the calendar that proposed the modern Gregorian calendar.

Father Jacob, a mathematician tapped to become the director of the Xavier Institute of Peace Studies and International Relations in Cochin, India, later this year, is a relative newcomer to the group. He joined in 2010, while many other members have belonged since the 1960s and 1970s.

The group has existed since 1963 when a couple of Jesuit priest mathematicians decided to spend the summer together to explore their passion for mathematical concepts at Georgetown University. Its work has focused on research and ideas with the vital give-and-take so often found in academia. Prayer and Mass have been integral to the group. 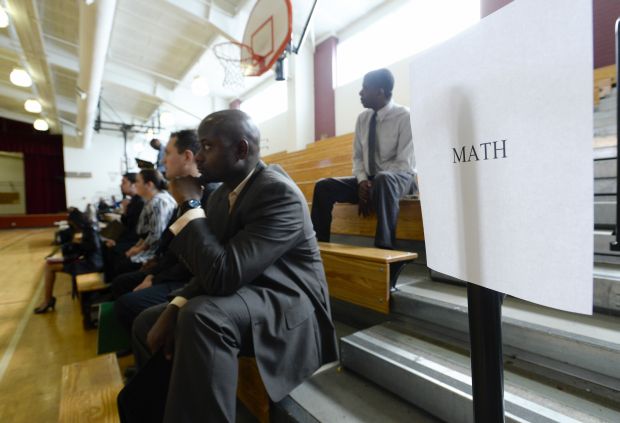 While the first summer gatherings involved only clergy, and mostly Jesuits at that, the Clavius Group has widened its reach, inviting women religious and laypeople with families into its ranks, This summer the group branched out to explore God’s action in the world by looking at the intersection of science and religion during a two-day symposium that was open to the public.

Presentations by both members and nonmembers discussed the hiddenness of God; parallels in technological interaction between human beings and computers and knowledge of God’s action in the world; challenges and opportunities in science-religion dialogue; reconciling evolutionary evil from the perspective of parasites; and fuzzy logic, a field of mathematics that deals with ambiguity and uncertainty, and understanding God.

The relationship between science and religion has been gaining wider attention in secular organizations as well. Jesuit Father Paul Schweitzer, 76, a retired mathematics professor from the Pontifical Catholic University in Rio de Janeiro, who joined Clavius in 1966, reported on the discussions of scientists and mathematicians from around the world at a conference in France in June sponsored by Wilton Park, an agency of the British government focusing on global change, and CERN, the European Organization for Nuclear Research based in Geneva.

He said much of the discussion focused on ethical issues arising from scientific research, which ultimately stem from religious values. He suggested that CERN may be concerned about the “ethical consideration” of its particle research activities.

“I certainly think raising these questions is very important and the dialogue is trying to understand what other people are saying to realize the elements of truth and of insight that exist,” he told the symposium.

The symposium also memorialized member Jesuit Father William Stoeger, an astronomer at the Vatican Observatory based in Arizona, who died of cancer March 24 in Los Gatos, California.

Father Stoeger, 71, was recalled by longtime members for his enthusiasm for theoretical cosmology as well as interdisciplinary studies relating science and religion. Members said the Jesuit had the knack for explaining complex theoretical concepts in layman’s terms.

Many of the two dozen Clavius members in attendance told CNS they look forward to the annual gatherings, which have lasted as long as six weeks in the past at colleges and universities around the country. They also said they have come to cherish the friendships and deep spirit of community built around Catholic faith as much as mathematics.

“These are all my friends. We support each other in many ways in our faith and our emotional lives,” said Father Schweitzer.

Thomas Banchoff, 76, who recently retired from the mathematics department at Brown University in Providence, Rhode Island, and has been a Clavius member since the early 1970s, described the group as “very hospitable and constructive.”

“It’s good friends. Personally, I enjoy it very much. Certainly I’ve enjoyed the professional association,” he said, recalling how his entire family — a wife and three children — would look forward to spending a month with other families at a different college or university where they forged friendships and were encouraged to offer insights on Scripture and new discoveries.

Sister Barbara Reynolds, a member of the Sisters of the Divine Savior and a mathematics professor at Cardinal Stritch University in Milwaukee, said her work in the classroom is influenced by her involvement with the Clavius Group.

“What we have here in this symposium is the possibility of articulating the bridge between the scientific work that many of us are involved in and the faith life. … We are all looking for ways to integrate, to bridge the gap, between what we believe and our faith experience and what we do in the world. I think many us believe our action is a manifestation of God’s spirit acting in the world,” she said.

Like many organizations, the Clavius Group is faced with aging members. While there are younger members, like Michele Intermont, associate professor of mathematics at Kalamazoo College in Michigan. Intermont, 47, has been a member for 20 years. The longtime members are beginning to wonder what form the organization will take in the future.

Intermont may hold the answer. When she first attended the summer gathering, she said, she was interested in hearing critiques of her mathematical research from senior members. But no more; she welcomed the exploration of the science-religion crossroads as well.

“I come for the community relationships,” she told CNS. “I come less for the math than when I was first starting out.”

NEXT: Catholic leaders speak out about policy toward migrant kids, families