No summer break on debating Common Core standards for schools 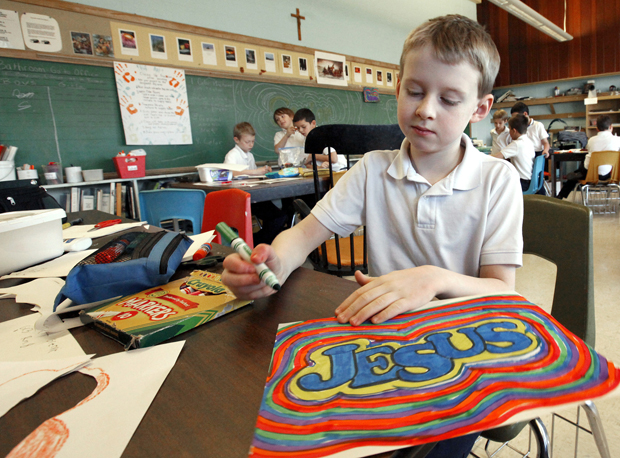 WASHINGTON (CNS) — Even in the dog days of summer, the realization that the school year is just around the corner keeps creeping up like pockets of sprouting weeds in a garden.

By mid-July, for example, stores had already begun replacing pool and patio items with school supplies and backpacks.

But there was no summer break for the love-them-or-hate-them Common Core State Standards.

The standards — a state-led initiative of expectations for students to master in each grade level — have been embraced or rebuked; no one seems to have a lukewarm reaction to them nor have they stopped talking about them even while schools aren’t in session.

They emphasize critical thinking and problem solving and have been touted, since they were launched in 2009, as a way to better prepare students for college and the job market. Politicians and parents alike have not been sold.

The standards were initially adopted by 45 states and the District of Columbia. Five states never adopted them; three backed out of using them; and a handful of governors are now talking about dropping them, citing constituents’ concerns about the federal government’s overreach into classrooms.

Backlash against the standards includes fears that they will “dumb-down” schools and that they are simply tools for the government to access students’ personal data.

The standards, simply called Common Core, were developed by the National Governors Association and the Council of Chief State School Officers. States decide if their public schools will use them, but federal officials give them financial incentives to do so, since implementing the standards enables states to apply for competitive federal education grants.

Amid the controversy over the standards, one of their co-founders, the National Governors Association, clearly backed away from them during its July 10-13 meeting in Nashville, Tennessee. The fact that Common Core was not on the group’s official agenda was an omission The Wall Street Journal described as “a sign of how the bipartisan idea has become a political minefield.”

But Common Core was a hot topic at the July 11-14 national convention of the American Federation of Teachers in Los Angeles. After intense debate, the teachers union passed a resolution calling for more teacher input in implementing the standards. The critical discussion about this put the standards — which previously had the teachers union’s support — on notice.

And they aren’t the only ones with questions. From the onset, many Catholic parents have been leery about Common Core for other reasons. Mainly, they’ve been concerned that the standards will require Catholic schools or homeschoolers to use materials that go against Catholic teaching. They have made their objection clear in petitions and email campaigns to principals, diocesan school superintendents and bishops.

At the U.S. bishops’ annual spring general assembly in New Orleans June 11-13, the National Advisory Council, a 48-member group that advises the bishops on various issues, asked the Catholic leaders to continue to review the Common Core State Standards.

In April, the U.S. Conference of Catholic Bishops’ Secretariat of Catholic Education published a nine-page resource of questions and answers about the use of the Common Core State Standards in Catholic schools. The document, on the USCCB education website, has been used by school superintendents and state Catholic conference directors as part of professional development.

It points out that educational standards are hardly new to Catholic schools and also that Catholic schools have “great latitude at the local level related to standards, curriculum, textbooks, teaching methods and implementation in the classroom.”

It also says Catholic schools are not required to use the Common Core State Standards but could implement them in whole or in part if local schools “judged them to be of assistance to the academic quality of the Catholic school without detriment to its mission and purpose.”

“If, by contrast, a Catholic school at the local level has chosen not to implement those standards, it is because it has judged them, for a variety of reasons, not to be of such assistance.”

The document stresses that Common Core should “be neither adopted nor rejected without review, study, consultation, discussion and caution.” “Catholic schools must take into consideration the horizon of the local, state and national education landscape and the influence and application” of the standards, it says, and to ignore that “would place our students at a significant disadvantage for their post-secondary education, which is not an acceptable option for our families.”

Dominican Sister John Mary Fleming, executive director of the U.S. bishops’ Secretariat of Catholic Education, said diocesan Catholic school leaders are continuing to “sift through” Common Core to determine what standards they will implement and what they won’t.

“It is an ongoing process,” she told Catholic News Service July 17.

NEXT: For Clavius Group, mathematics a means to explore mystery of God