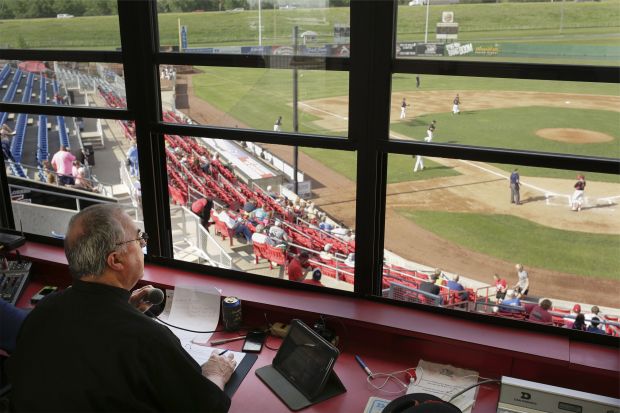 SIOUX CITY, Iowa (CNS) — From the back, all the men in the press box at the Sioux City Explorers baseball game looked the same.

That is, until one swiveled in his seat to take a swig of his Pepsi and the white of a Roman collar appeared.

For the past decade, Father Craig Collison has been the play-by-play announcer for the Xs, whose home ballpark is Lewis and Clark Stadium in Sioux City.

“I got involved with the Xs, as I do with much of my public address activity, through a telephone call from them,” he explained. “It seems their regular public address announcer at the time got called up to active duty in the military and needed to leave. The general manager called me and asked if I would be interested in the position for the second half of their season that year and I consented.”

Father Collison commits to the home games of the Explorers for the season, with a particular caveat.

“The understanding is that anything with my priestly ministry comes first,” he told The Catholic Globe, newspaper of the Sioux City Diocese. “In other words, if someone would die and I would have a vigil service to lead and there happened to be a game scheduled, the Explorers would find a substitute for me at the game. The same holds true for weddings and wedding rehearsals that were scheduled.”

Unlike others in the press box who may be there as part of their employment, Father Collison is there because he enjoys it.

“It’s a hobby of mine,” he said. “Priests have hobbies just like everyone else. Some priests play golf; some are wonderful musicians; some are great carpenters; some are great chefs. I talk — something my mother always said I did too much of!” 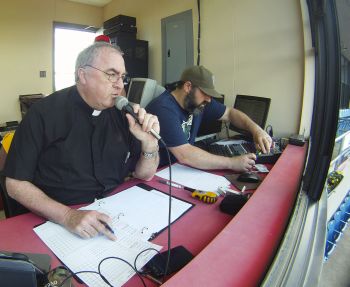 Father Craig Collison, a priest in the Diocese of Sioux City, Iowa, reads off his list of players as he introduces the Sioux City Explorers baseball team members in their game against the Gary, Ind., Southshore Railcats from the press box June 4.

Father Collison gets a great deal of pleasure with being associated with the game.

“I was never the athlete,” he said. “My brothers and my sister were, or my nieces and my nephews are. I always thought, however, that I understood the different sports I was interested in very well, and started to officiate, umpire baseball and later refereed volleyball.

“When my officiating days came to an end after about 30 years, I looked for ways to stay involved and be a ‘part of the game,'” he continued. “Public address was my ticket. It is very different from being a spectator, yet at the same time, I feel part of my success is being able to interact directly or indirectly with the spectators in cheering for their favorite teams. I can be a good spectator, but I love to be involved in the game.”

With those joys come some stresses, Father Collison clarified, and they may be associated with the yellow walkie-talkie within his arm’s reach.

“My biggest challenge in public address announcing is being able to ad lib at times,” he said. “There are situations that come up suddenly of all kinds of origins and an administrator, a general manager, or a tournament director brings it to you and says, ‘Handle it!’ I sometimes need to think for a moment before I speak to the issue. With experience, some not so good, I’m getting better and better at the ad lib part of the job.”

Fans tell Father Collison they like the “sound” of his voice.

“I had a tremendous speech instructor in high school, Sister Mary Norine, and Don and Loretta Stribling at Loras College in Dubuque,” he said. “They taught me how to speak, how to enunciate words and different inflections to use. The fans tell me they can understand what I am saying when I speak and they appreciate that.”

The games also allow Father Collison an opportunity to evangelize; thus, why he wears his collar.

“Evangelization, other than the fact this is a hobby I love, is indeed a huge reason I continue to be involved in public address,” he said. “Being a public address announcer is an opportunity to show people that priests can be real and alive in other places than around the church or the parish.”

Believe it or not, Father Collison pointed out, priests still do many of the same things “regular people” do and don’t need to give them up to perform their ministry as a priest.

“I cannot tell you how many times after a game or before a game I’ve umpired or been the referee, or announced a game or match that a coach, a player, a parent, a fan, has pulled me aside to talk about a problem, ask a question they’ve been wondering about, or even hear their confession,” he said. “It’s a marvelous tool to let people become more and more comfortable with who and what a priest is, a pretty regular guy that is blessed with this marvelous vocation.”

It may even lead to someone heeding the call to the priesthood or religious life, Father Collison speculated.

“Hopefully it helps other guys see as well they might be considering a call to the priesthood or girls who might be considering a call to the sisterhood,” he said. “You can still be yourself in every way, continue to have hobbies and interests you’ve always had, and become a priest or a sister and be very happy and fulfilled in every way God has blessed you.”

PREVIOUS: Bill that would overturn any restrictions on abortion termed ‘radical’