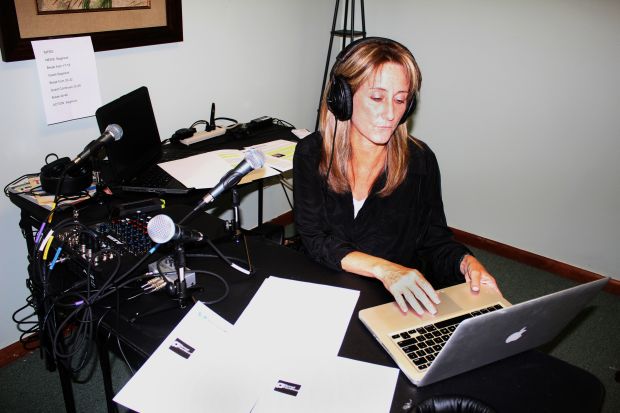 Anne Lotierzo, director of Pregnancy Care Centers in Fort Pierce and Stuart, Fla., welcomes listeners in early June as she kicks off a new pro-life radio show that is broadcast in the Diocese of Palm Beach, Fla. (CNS photo/Linda Reeves, Florida Catholic)

FORT PIERCE, Fla. (CNS) — A new radio program launched in the Palm Beach Diocese in June with a focus on shedding light on pro-life issues, and sharing ways to get involved in promoting the culture of life in the not-so-pro-life world.

Organizers believe the program may be the only one of its kind in Florida, if not the United States, that is broadcast from a site across the street from an abortion clinic.

“We like being at the front lines. That is where the battle is,” Lotierzo said in an interview with the Florida Catholic, Palm Beach’s diocesan newspaper.

“I think the program idea is great,” said Eva Daniel-Barrera, a parishioner of St. Mark the Evangelist. “The program will let everybody know about current pro-life issues. There are a lot of concerns today.”

Computer users can tune in through the Internet to hear broadcast as well as www.wjppfm.com.

“You won’t hear the issues we will cover on mainstream media,” said Lotierzo about the program, which has commentary, guests, and special features and discussions with a Catholic, pro-life perspective.

Lotierzo and Berreth, both directors of the Pregnancy Care Centers of Fort Pierce and Stuart, a nonprofit organization dedicated to pro-life education and saving babies, have set up a studio in a back room of the care center in Fort Pierce. It is across the street from Woman’s World Medical Center, an abortion facility.

“I have been out on the streets in front of the abortion clinic since 1995,” said Berreth about joining groups on the sidewalks near the abortion clinic to pray and provide witness to the pro-life movement. “If this (the radio broadcast) goes well, it will go nationwide and be syndicated.”

The weekly one-hour program premiered June 9 with Father Frank Pavone as the first guest. He is national director of Priests for Life and president of the Christian coalition National Pro-life Religious Council.

The priest also is a national pastoral director of the Silent No More Awareness Campaign, organized to make the public more aware of the effects abortion has on both women and men, and Rachel’s Vineyard, a healing ministry for those suffering in the aftermath of abortion.

“I have never been more confident that we are closer to seeing the end of legal abortion,” Father Pavone said, as he joined the co-hosts by phone. He sees a weakened abortion industry and pointed to changes in state and federal laws “recognizing the unborn as a real human being.”

“We see changes in the laws laying the groundwork and moving us into that direction. We are seeing similar changes in public opinion,” said the priest, who has been involved in the pro-life movement since 1976.

The conversation turned at one point to sweeping changes over the last decades and modern society’s growing acceptance of divorce, sex outside of marriage, same-sex relationships and babies born out of wedlock. “How do we bring the light to the truth?” Lotierzo asked.

“Two words come to mind,” Father Pavone replied. “One is ‘witness’ and the other is ‘suffering.’ Witness means we have to live out the truth in our church in our families and in our communities.”

“The second thing is suffering. We are all in this together and we all have to suffer together,” he said. “We need to reach out in love to the people who need our help: the divorced, the lonely, those who are suffering from the wound of abortion, those who are confused about their sexuality. We need to reach out in love and show people we are here to help people follow the law of God.”

Lotierzo and Berreth hope to change hearts with “CrossRoads.”

“Simply said, we hope to inform, educate and inspire listeners to take action,” said Lotierzo. “We live by the motto ‘We can make a difference, we must make a difference,’ and I hope that is something we can communicate to our listeners and that they can come to embody that same motto.”

Reeves is on the staff of the Florida Catholic, newspaper of the Palm Beach Diocese.

PREVIOUS: Why children run from their Central American homes