Why children run from their Central American homes 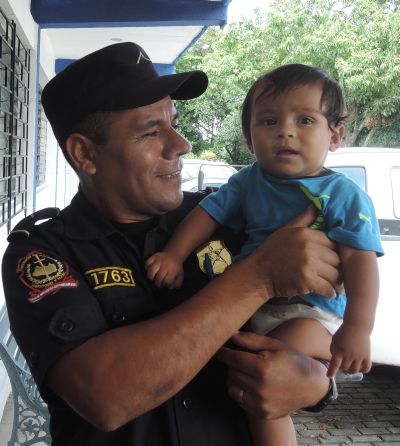 A member of the Salvadoran national police is seen July 1 holding an infant who arrived back in San Salvador from Mexico. The number of children leaving the country is increasing dues to factors such as violence and a belief that minors will be granted asylum upon arriving in the United States. (CNS photo/David Agren)

SAN SALVADOR, El Salvador (CNS) — Giovani Melendez, 31, fled this Central American capital with his family, setting out suddenly on a search for safety in the United States after gangs demanded growing extortion payments he was unable afford. The family — Melendez, his wife, and children, ages 5 and 12 — only made it to the southern Mexican state of Chiapas, where officials stopped them and sent them back to El Salvador.

“The main motive for leaving is insecurity,” Melendez, an auto painter by profession, said after arriving back on a bus carrying families and children — including infants.

“I was doing well here with no problems” or plans to leave, he said. “But (the gangs) wouldn’t let me work.”

Emigration from El Salvador has been common in past decades; civil war and poverty prompted many to pull up stakes and flee for far-flung corners of the world. Efforts at reunifying families made many more follow.

But Central America is experiencing another outflow, as many minors attempt to escape violence or reconnect with their parents who support households they have not seen in years and suspect the law will look kindly upon children arriving in the United States.

Central American deportees describe desperation in their daily lives, in which violence is reaching intolerable levels and increasingly impacting children, who can be killed for coming from the wrong gang-controlled neighborhood, or forced into lives of crime as gangsters.

“They roughed me up,” said Oscar Mancilla, 17, another deportee waiting to be processed. “(The gangs) ask you to join, even if you don’t want to.”

The violence is forcing some families across Central America to send their children unaccompanied toward the United States; sometimes they pay a smuggler to accompany them. Often, though, they often just wish the youngsters well as they steal rides through Mexico, where the risks range from robbery to rape to having their limbs cut off by the northbound trains they ride.

Migrants now leave Central America with something new, however: hope, especially that this time the children arriving will receive asylum or permission to stay, even though there has been no change in U.S. policy. Coyotes — human smugglers — are likely responsible for spreading such rumors.

“It’s a lie, but it’s been propagated throughout the country,” said Carlos Flores Pinto, director of the border project at Casa Alianza (Covenant House) in San Pedro Sula, Honduras.

“Mothers and fathers decided this is the opportunity to save their children or, if they (parents) were already (in the United States,) the chance to see their kids again,” he said.

Those children have created concern for U.S. officials. U.S. Customs and Border Protection says it has detained 47,017 unaccompanied children from October 2013 through May 2014, an increase of 92 percent from the same period a year earlier. A draft internal Homeland Security memo from May, reviewed by The Associated Press, said U.S. Border Patrol agents could arrest as many as 90,000 unaccompanied children crossing the Mexican border this year.

It includes three of the most violent countries in the world, with the murder rate in Honduras topping 90 per 100,000 residents, according to the U.N. office on Drugs and Crime. The rates run roughly half as high in Guatemala and El Salvador.

Honduras has struggled since a 2009 coup, which ushered in instability and allowed drug cartels to subsequently take advantage of the increasing instability and impunity to use the country as a transit point.

Gangs also grew in power, while a disease known as coffee rust wiped out the most recent coffee crop, throwing hundreds of thousands of poor Hondurans out of work. But no one reason explains the exodus of children, said Juan Sheenan, country director for Catholic Relief Services, the charitable arm of the U.S. Conference of Catholic Bishops.

“It’s been a combination of a number of push factors, and the new ingredient is this coffee rust,” Sheenan said.

El Salvador has experienced a similar story of poverty and violence, especially with gangs, which have their origins in the Salvadoran immigrant enclaves of Los Angeles and were brought back with deportees in the 1990s. A gang truce produced a pause in the violence by driving down the homicide rate by 40 percent in recent years — but the truce has since unraveled.

“It strengthened the gangs’ leaderships,” while everyday crimes such as extortion continued, Father Salomon Perez, pastor of San Jose de Flores Parish in Tonacatepeque, on the outskirts of San Salvador, said of the at-times unpopular truce, which was also attacked for a lack of transparency.

Father Perez has helped negotiate a truce between local gang leaders and the community to reduce extortion attempts and curb killings. Still, parishioners spoke of suffering when someone leaves the community.

“In any place we go, there’s violence. On top of that, there’s enormous poverty, which generates more violence,” said sales representative Rafael Ardon, 22.

Choir member Araceli Quintania, 24, had her brother abandon medical school and head for California, where he arrived in late June, because of threats: he lived in a barrio controlled by one criminal group, but studied in an another area controlled by a rival gang, which took issue with his residence.

“He wants to keep studying, but he’s scared to come back,” Quintanilla said, adding that an aunt in the U.S. lent him $8,000 to pay a coyote, but that money must be repaid.

Another member of the choir, 20, left after his mother, who had supported him for more than a decade from New Orleans, fell ill and need support, Quintanilla said. He arrived after three attempts: the number of chances the coyotes provide their client for each payment.

Rick Jones, CRS deputy regional director for global solidarity, justice and growth in Latin America and the Caribbean, has heard horror stories, too: children hiding at home because gangs threatened them at school, an estimated 130,000 people internally displaced due to violence, and a woman who had gangsters demand she hand over her two daughters — to be their girlfriends.

“She left the next day,” Jones said of the woman, who was recently deported back to El Salvador, but was likely to leave again.

“Eighty percent turn around and head right back,” he said of deportees.

Melendez expressed uncertainty about heading out again. He once owned a business painting cars and doing bodywork, but gangs started asking for extortion payments. One-hundred-dollar monthly payments became $200, in a country where the minimum wage is slightly more than $300 per month. Then came the threats.

“The gangs know more about you, your family … than anyone else,” he said.

“They’re a well-organized outfit. This isn’t just a group of kids.”

He sold his business immediately to pay for a trip to the United States, taking 30 cents on the dollar by his estimation. Relatives came by the house to claim personal items the Melendez family could not carry on their backs.

Where he will go next remained uncertain.

“I need to find a faraway family member,” he said.

PREVIOUS: Archbishop orders internal investigation of claims made against him