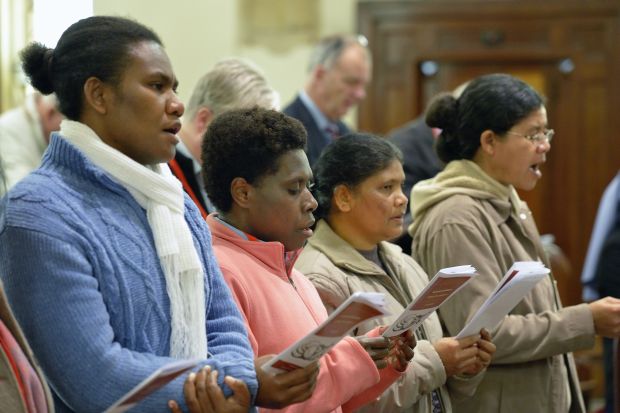 Participants in a memorial Mass at St. John the Evangelist Church in Melbourne, Australia, July 20 remembered the AIDS scientists and others who lost their lives in the crash of the Malaysia Airlines Flight MH17 shot down over Ukraine. (CNS photo/Paul Jeffrey)

MELBOURNE, Australia (CNS) — Catholics involved in the fight against HIV and AIDS took a few moments July 21 to remember their friends and colleagues who perished in the Malaysia Airlines flight shot down over eastern Ukraine.

At least six AIDS officials were among the 298 people killed aboard Malaysia Airlines Flight MH17. They were headed to the biennial International AIDS Conference in Melbourne, where some 14,000 researchers, activists, caregivers, politicians and people living with HIV gathered July 20-25.

Archbishop Wilson called the MH17 incident “a terrible tragedy for the people and their families and a shock to the worldwide community of people who have dedicated their lives to fighting HIV and AIDS.”

At the opening of the main AIDS gathering July 20, delegates paused for a moment of silence to remember their colleagues.

Msgr. Robert J. Vitillo, a special adviser on HIV and AIDS to Caritas Internationalis, called the loss of his colleagues “a difficult shock” to the AIDS community. The plane crash killed at least 28 Australians, among them Sacred Heart Sister Philomene Tiernan, a teacher at the Kincoppal-Rose Bay School in Sydney.

Msgr. Vitillo was in Ukraine a week before coming to the Australia conference to study the response of the Catholic Church there to HIV and AIDS. He said the violence in Ukraine has had other negative effects on the struggle against HIV and AIDS.

“Church workers there are concerned about the many people displaced by the recent fighting who have lost their access to antiretroviral drugs. There are areas where no government is in control, and that means health needs go unmet,” he said.

“The United Nations prefers to call them fragile states, but I call them failed states. We have the same problem today with access to treatment in the Central African Republic. And in the Nuba Mountains of Sudan, people are being deprived of their access to both HIV-related drugs as well as children’s vaccines and medicines for tuberculosis. The supplies all have to go through the capital of Sudan, but they don’t get shared with contested areas,” Msgr. Vitillo said.