At AIDS conference, Catholics worry about reduced funding for programs 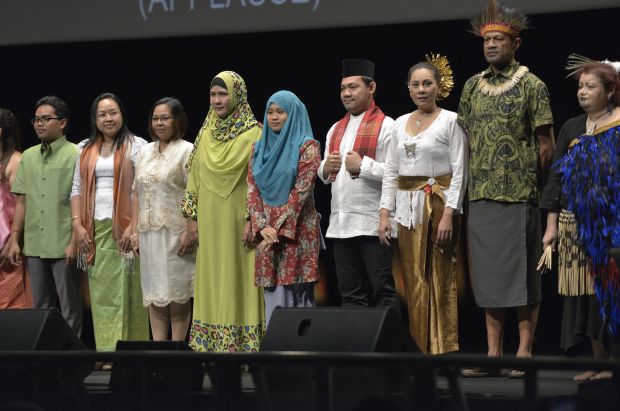 Individuals from the region living with or affected by HIV stand on the stage during the July 20 opening of the 20th International AIDS Conference in Melbourne, Australia. (CNS photo/Paul Jeffrey)

MELBOURNE, Australia (CNS) — Catholics gathered for the 20th International AIDS Conference worry that medical advances against the HIV pandemic are leading to decreased attention and less funding for the struggle against the deadly virus.

“AIDS is not a designer charity anymore,” said Maryknoll Father Rick Bauer, a Namibia-based U.S. missionary from the United States who heads the international Catholic HIV and AIDS Network. “People in the airport ask me what my red ribbon means. Fifteen years ago, everyone knew what it symbolized. Now it’s different. The media has dropped us.

“And this comes just as we’re starting to believe we might end the pandemic as a global health emergency by 2030,” Father Bauer told Catholic News Service. “To achieve that, however, we’ve got to get more people on treatment and get their viral loads down. Such treatment is the best prevention, but it’s going to be hard to do if we can’t keep attention focused on the challenge and if we can’t have access to the necessary funding.”

Msgr. Robert J. Vitillo, a special adviser on HIV and AIDS to Caritas Internationalis, said major strides in AIDS treatment have caused many to think it is no longer a fatal disease.

“I was in Ukraine last week and someone brought up the need for hospice care for people living with AIDS, and there was a Western European doctor along who had a hard time with the question. People had to struggle to get the European doctor to understand that people are still dying from AIDS,” Msgr. Vitillo said.

International donors, particularly the U.S. government, are cutting back support for AIDS programs in countries where growing economies have moved the nations from being considered “poor” to now being labeled “middle income.”

“Donor governments want to consolidate their funding and only give big grants and want to give those to government programs. In Asia, for example, more and more governments are being recognized as middle-income economies. So the donors say they don’t need money anymore,” Msgr. Vitillo said.

“It’s true that a small number of people are getting richer and richer, and the country’s GNP may have risen into the middle-income category, but the situation of the poor is often worse. And some governments claim they can handle all of their own health care, but they really can’t, and what they do provide they tend to concentrate in the large cities. As a result, the churches that have been providing care in rural areas have less access to funding today.”

Father Bauer has worked with a Catholic organization in Namibia that provides testing, counseling, treatment and education about AIDS in large swaths of the countryside. Yet recent cuts in finding from the U.S. President’s Emergency Plan for AIDS Relief have forced the group to close five of its 14 treatment centers. He said he cannot accurately gauge the impact of the closures because he has no funding to evaluate changes in the now unserved areas.

Father Bauer said PEPFAR funding for Namibia has dropped from $100 million to $40 million a year.

“That’s a huge cut, and they say it’s because we’re now a middle-income country. Yet we have the third-worst Gini coefficient in the world,” he said, referring to a common yardstick of income inequality. “The incredible wealth in the cities is masking desperate poverty in the countryside.”

The priest said he agrees with the concept that governments should be responsible for the health care of their citizens.

“But unlike in the U.S. and Europe and Australia, that concept is still new in Africa. As a result we tend to overmedicalize much of the pandemic, believing that if we can just deliver the pills we’ll solve the problem. We think that if we simply tell the patient when to take the pills, they will,” Father Bauer said. “But the compliance isn’t there. We’ve got to look at the social and emotional and spiritual situation of each person, and treat that whole person. That’s what the church does best, and that’s what will get compliance up.”

He compared the current thinking to the Cold War era.

“Many of these decisions are made in Geneva or Washington without really understanding what’s happening with people on the ground. It’s like communism. It was a great theory, everyone sharing everything, but it simply didn’t work. This whole process of having country ownership of the HIV response is a great theory, but it’s too early to work. Now is not the time to cut back,” Father Bauer said.

“We now have the science to suppress the virus living in our sisters and brothers living with HIV. We now have the data that say if you get sufficient viral load suppression your life expectancy is the exactly the same as someone who is HIV-negative. Now we need the political will, the social mobilization, the church mobilization, to accompany our brothers and sisters to get the compliance and the viral load suppression that will ultimately make AIDS a manageable health issue,” he said.

NEXT: At AIDS conference, Catholics remember colleagues on MH17