Expulsion of Christians a ‘crime against humanity,’ Iraqi bishop says 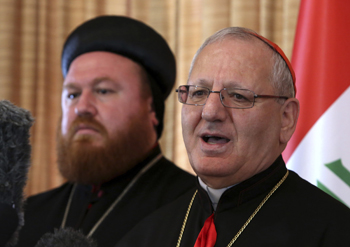 Chaldean Patriarch Louis Sako of Baghdad speaks during a July 22 news conference in Irbil, Iraq. He said the future of Christians in Iraq was uncertain because of the recent violence. (CNS photo/Reuters)

VATICAN CITY (CNS) — Backed up by death threats and property seizures, the expulsion of the entire Christian community from Mosul is “a crime against humanity,” said an archbishop from Mosul.

“It’s an ugly word, but it is what happened and is happening,” he told Vatican Radio July 22.

Iraq’s Christian leaders are tired of people making appeals and declarations about their plight without backing up their words with real action, the archbishop said.

“Words do nothing today,” he said.

Support and prayers are needed, he said, but “we also expect all Christians to show solidarity with concrete action” and “without being afraid to talk about this tragedy.”

Chaldean Auxiliary Bishop Shlemon Warduni of Baghdad said: “We need action first. The world is not bothering with what is happening to Christians in Mosul.”

The world’s leaders, including those of the United States, must live up to stated commitment to promoting what is good, he told Catholic News Service by telephone July 23.

“They must do something, because they can,” he said.

The international community must help those being displaced, not because they are Christians, but because they are human beings, he said. Because it overthrew Iraqi dictator Saddam Hussein, the United States in particular must be asked: “Where are the human rights? Where is the democracy?” he said.

“There are no words to describe them,” he said. “They have no conscience, no religion. Even though they talk about God, they don’t know God,” he said of the militant group that has declared a caliphate — a state governed by a religious leader.

The militants forced thousands of Christians from their homes, seizing their property and then robbed them of their belongings at checkpoints as they fled the city.

Bishop Warduni said, “They take everything, even a wedding ring from a widow, medicine from the hands of a small child, they just (pour) it on the ground.”

The militants confiscated the cars people were fleeing in, he said, forcing the occupants, including “small children, old people, sick people, to walk on foot in 48-degree (118 Fahrenheit) heat.”

Bishop Warduni was one of a number of Iraqi Christian bishops who gathered in Ankawa, a northern town near Irbil, July 21-22 to talk about the crisis unfolding in Mosul with representatives from the United Nations, UNICEF, Caritas and local government leaders.

At the end of the two-day meeting, Chaldean Patriarch Louis Raphael Sako and bishops from the Chaldean, Syriac Orthodox, Syriac Catholic and Armenian churches called on the Iraqi government to “stop the catastrophe” and guarantee the “necessary protection” needed for Christians and other minorities being targeted by the fighters.

“A crime is a crime, and it cannot be denied or justified. We expect concrete actions to assure our people, not just press releases of denunciation and condemnation,” the statement said.

The bishops also called on the Iraqi government to provide basic services, housing, schools, aid and financial support to those who have been forced from their homes and livelihoods. They thanked the regional Kurdish government for its hospitality and willingness to protect fleeing families.

Meanwhile, the Organization of Islamic Cooperation, representing 57 Muslim countries, condemned the forced displacements in Mosul and called the action “a crime that cannot be tolerated.”

“The practices of the Islamic State have nothing to do with Islam and its principles that call for justice, fairness, freedom of faith and coexistence,” the organization said in a press release July 21.

According to a recent report by the Christian Aid Program, CAPNI, all churches and monasteries in Mosul, numbering around 30 structures, were confiscated and are under the Islamic State’s control.

Crosses were removed from Christian places of worship, which, in many cases, were then looted, burned, destroyed or occupied by the militant group.

Shiite mosques also were demolished and all Sunni, Shiite and Christian tombs in the city were destroyed, too, the report said.

Such destruction was endangering many of the nation’s ancient historical, cultural and religious sites, including the tomb of Jonah, which reportedly was broken into in mid-July, the report said.

All non-Sunni communities living in Mosul were being targeted, it said, including Shiite Muslims.

Those who escaped Mosul and found shelter in surrounding villages were still facing hardship, it said, as the Islamic State cut off electric and water supplies to neighboring villages.

There is no drinking water in some areas and the Islamic State was preventing medicine and other hospital supplies from getting past the areas it controls.

The fighters also closed the city’s banks, CAPNI reported, so many people who want to leave Mosul were delaying their departure because they couldn’t access their own bank accounts and they couldn’t find buyers for their homes given the “frozen” housing market, it said.

Most city services have “totally collapsed” and the private sector is “almost paralyzed,” it said.

NEXT: Jerusalem patriarch: Don’t punish all Gaza Palestinians because of Hamas