Jerusalem patriarch: Don’t punish all Gaza Palestinians because of Hamas 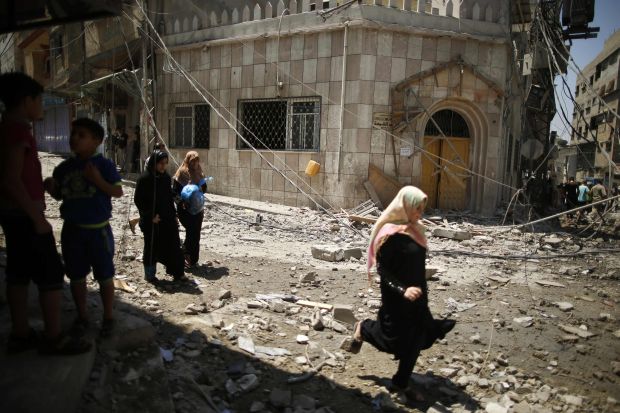 WASHINGTON (CNS) — It is impossible for Israeli military to target Hamas missiles without hitting civilians in the Gaza Strip, said Latin Patriarch Fouad Twal of Jerusalem.

“We have hundreds and hundreds of killed people, innocent people, 80 percent innocent,” he said, noting the deaths of “mothers, children, students.”

“In Gaza, when (Israelis) strike, there is no shelter,” he said.

“The Israeli people are happy to have bomb shelters, and they can go escape when they want,” he said, referring to the rockets Hamas has been firing into Israel. “Meanwhile, in Gaza, we have nothing. No shelters, and they (people) are in the street.”

Patriarch Twal emphasized that the church “absolutely condemns” the firing of Hamas rockets. “But remember these rockets: They make noise, they make fear, they never killed one person,” he said.

The patriarch was visiting the United States July 17 when Israel began its ground campaign into Gaza in response to a string of escalating events that began with the kidnappings and deaths of Israeli and Palestinian teens. Israel began airstrikes July 8 and by July 23, the Israeli death toll stood at 32 soldiers and three civilians; the Health Ministry in Gaza said more than 660 Palestinians had been killed and more than 4,120 wounded.

In Washington July 22, Patriarch Twal met with members of the U.S. Committee on International Religious Freedom, and he told CNS he expected to meet with U.S. government security officials.

Patriarch Twal, whose patriarchate, similar to an archdiocese, includes Israel, the Palestinian territories, Jordan and Cyprus, said he did not understand why authorities do not want to dialogue. Instead of the military option, it is “better to find another way to look for peace,” he said.

He also advocated ending the seven-year Israeli blockade of the Gaza Strip, which he said makes the area “an open-air prison.”

“It is better to be good neighbors forever than to be enemies forever,” he said, emphasizing, “Peace is for all.”

He noted that three of the patriarchate’s 118 schools are in Gaza, and there they have “more Muslims than Christians, maybe some children of Hamas leaders.” The schools teach them to “love God, love the neighbor,” he said.

“We teach them how to respect others,” he said.

He also said sometimes Hamas authorities receive church officials when they visit schools or their parish in Gaza.

“We must be friend with Hamas, we must be maybe grateful for Hamas, because we have more extremist groups in Gaza that only Hamas can control,” he said.

He said for Christians to stay in the Holy Land, “we have to improve the situation.”

“I said often our presence in the Holy Land is a mission,” he said. “We are there as a witness of our eventual salvation.

“We are a church of Calvary, of suffering. We have to remember that the Lord before us suffered in this land.

“To live, love, work in the Holy Land, you have to build your cross,” he added.

Patriarch Twal said when people ask him for help, he speaks of the three Ps: prayer, pilgrimage and projects.

“We still believe in the power of prayer,” he said, noting that was the most important P.

He encouraged people to visit, noting, “That’s your mother church, and there’s a moral obligation to come with this P.”

Finally, he said, “Do something. Move. Touch your pocket.”

Get involved with a religious, educational or social project, he said.

But, he reiterated, most importantly, “We ask you to pray for us, to pray for this peace.”