Pope shows up at Vatican cafeteria for Friday lunch with workers 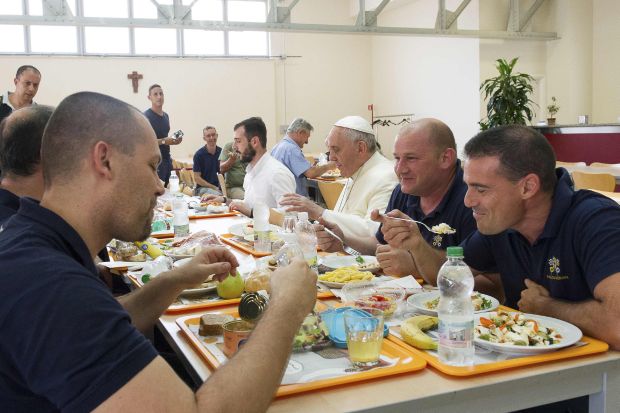 Pope Francis eats with Vatican workers during a surprise visit to the Vatican cafeteria July 25. (CNS photo/L'Osservatore Romano via Reuters)

VATICAN CITY (CNS) — Taking the chef completely by surprise, Pope Francis unexpectedly showed up to eat with the Vatican’s blue collar workers at their cafeteria in the tiny city-state’s “industrial park.”

“He showed up, got his tray, silverware, he stood in line and we served him,” the cafeteria’s chef, Franco Paini, told Vatican Radio July 25.

He acted “normally, like the humblest of the workers,” Paini said, his voice still trembling from the thrill. “Please forgive me, I’m still excited, you know?”

Wearing his white cassock and zucchetto, the pope grabbed an orange plastic tray and chose what he wanted from the array of prepared foods.

He got a plate of pasta without sauce; a portion of cod; a whole wheat roll; some “au gratin” vegetables; a few French fries; an apple; and a bottle of spring water — but not the fizzy, bubbly kind, witnessed reported.

“I didn’t have the courage to give him the bill,” said Claudia Di Giacomo, who was sitting behind the cash register.

Paini said the pope made everyone feel at ease. “We introduced ourselves, he asked how we were, what it was like working there, he paid us compliments; it was really nice.”

The pope sat down to eat at a table with workers from the Vatican pharmacy’s warehouse. Wearing dark blue uniform polo shirts, the men spoke to the pope about their jobs and the pope talked about his Italian heritage.

The whole time the pope was eating and chatting, people were taking the inevitable selfie with their cameras, cellphones and iPads.

“Pope Francis wasn’t bothered a bit” by the constant clicking, “and continued to smile and eat, carrying out the conversation” with his tablemates, the paper said.

The pope didn’t stay for the full lunch hour, heading for the door after about 40 minutes. But he gave all the workers there his blessing and posed for a group photograph before he left in his assistant’s car to drive back to his residence at the Domus Sanctae Marthae.

Paini said the surprise visit was “totally a bolt out of the blue. Who’d have thought! The pope coming to eat with us? Hah! We were all caught off guard, but it was one of the best things that could happen to you.”

NEXT: Patriarch decries ‘mass cleansing’ of Mosul by ‘a bed of criminals’