Patriarch decries ‘mass cleansing’ of Mosul by ‘a bed of criminals’ 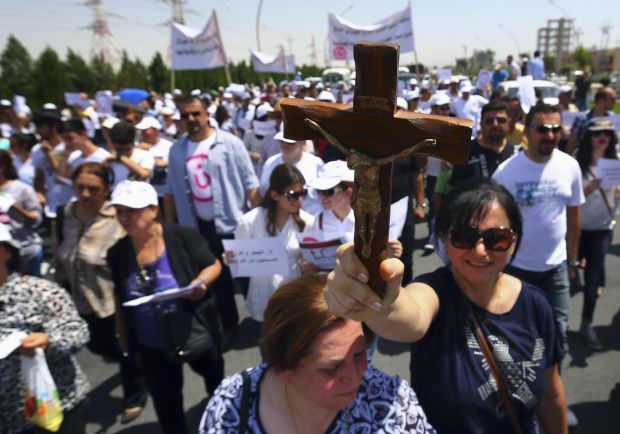 A Christian woman carries a cross during a July 24 demonstration in Irbil, Iraq, against militants of the Islamic State. (CNS photo/Reuters)

WASHINGTON (CNS) — Syriac Patriarch Ignace Joseph III Younan, in Washington to meet with federal government representatives and members of Congress, decried the “mass cleansing” of Christians from Mosul, Iraq, by what he called “a bed of criminals.”

“We wonder how could those criminals, this bed of criminals, cross the border from Syria into Mosul and occupy the whole city of Mosul … imposing on the population their Shariah (law) without any knowledge of the international community,” Patriarch Younan said July 25, referring to Islamic State fighters, formerly known by the acronyms ISIS or ISIL.

“What happened is really kind of a cleansing based on religion. You have heard about what they did: proclaim — they announced publicly with street microphones, the ISIS — there’s no more room for Christians in Mosul, that they either have to convert, pay tax, or just leave. And they have been leaving now since then with absolutely nothing,” he added.

“It is a shame that in the 21st century, you have such kind of behavior,” the patriarch lamented. “It’s mass cleansing based on religion, not only for Christians, the Christian minority, but for other minorities,” among them the Yezidi, an ethnic group of 700,000 based in Iraq’s Mesopotamia region.

In Mosul itself, “there is no more Christian presence,” Patriarch Younan said. “It’s tragic because it’s the largest Christian city in Iraq; it was what you call the nucleus of Christian presence for many centuries. And we have at least 25 churches in that city. All are abandoned. No more prayers, no services, no more Masses on Sundays in Mosul because no clergy, no people there that are Christian.” The Islamic State, he said, “took advantage of the Christians who are defenseless in that country, and they have no other means to stay in that country. They have nowhere else to go. They have been taken out with force and injustice.

“Christians used to make at the time of Saddam (Hussein), especially before 1980, about 2.5 percent. That means almost 1.4 million. Now they account for less than 300,000. This is a kind of tragic dwindling of their number,” Patriarch Younan said. “It’s just because of Christian belief and that they are different from the majority,” he added.

“The Kurdistan government took care of them, trying to help them,” Patriarch Younan said. “Of course they are still in dire need for assistance for those refugees being forced to leave without any means.”

The patriarch visited them June 27. He said he “urged them to take refuge and go back to their home city” because of Kurd assurances of protection.

Among Patriarch Younan’s appointments in Washington was one with Rep. Jeff Fortenberry, R-Nebraska, who is crafting a bill calling for internationally protected zones for threatened religious and ethnic minorities in the Middle East.

On a separate front, the patriarch said he has suggested a joint meeting of Eastern Catholic and Orthodox patriarchs to advocate for the region’s vulnerable populations, most of whom are adherents to their respective faiths.

“We have to take our responsibility very seriously together,” Patriarch Younan said. “We are on very good terms, the patriarchs. We are aware of the biggest challenges we are facing or our communities are facing, and we have to go throughout the world and bring the voice of our people to those who have a word to say on the international scene, whether the United Nations, United States, European Union, Russia, China, the Vatican” — and even top Sunni leaders in Egypt and Shiite leaders in Iran.

“We have to tell them that we have been here for millennia. We don’t have any ambition to fight any people, any community, or have ambition to govern or to make coup d’etat, but we have the right to live peacefully in the land of our forefathers as we did for the past 2,000 years,” Patriarch Younan said.

Patriarch Younan, who was born in Syria, said that while Saddam and Syrian President Bashar Assad have been vilified by the West, one thing they did well was to protect religious minorities.

The patriarch recalled appearing on a French prime-time news program where the host asked him: “You know you have a president, an awful president. He’s a monster. He’s killing innocent people, kids, and women.”

Patriarch Younan said he replied with the story of a Capuchin priest from a Syrian town on the Euphrates River that is 98 percent Sunni; it was coming under attack by anti-government rebels.

“I was the last one to leave,” the Capuchin told the patriarch. “I had a parish church, and I have with me in the parish center four nuns of Mother Teresa of Calcutta taking care of about 20 elderly women. And we could not anymore stand that situation. So the nuns called Damascus. And Damascus sent military vehicles to evacuate us from the parish compound — the nuns, 12 elderly people and myself to the airport, and they took us to Damascus.”

“Now,” Patriarch Younan told the French news-show host, “you can judge if that guy is a monster or not.”

PREVIOUS: Pope shows up at Vatican cafeteria for Friday lunch with workers