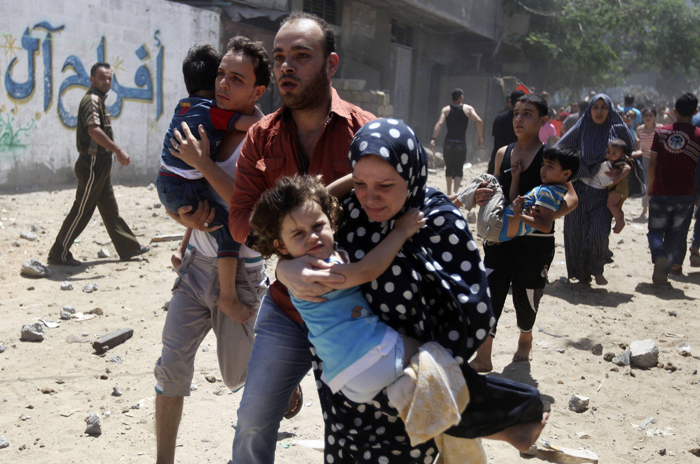 Palestinians run following what police said was an Israeli airstrike on a house in Gaza City July 9. The Israeli army intensified its offensive on the Hamas-run Gaza Strip, striking Hamas sites and killing dozens of people in a military operation it says is aimed at quelling rocket fire against Israel. (CNS photo/Majdi Fathi, Reuters) 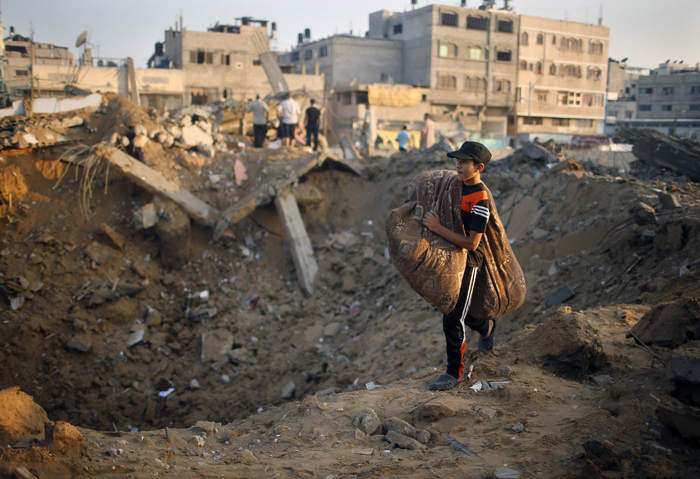 A Palestinian boy carries his belongings as he walks past the rubble of his family’s house which police said was destroyed in an Israeli airstrike in Gaza City July 9. (CNS photo/Mohammed Salem, Reuters)

JERUSALEM (CNS) — Catholic leaders in the Holy Land called for an end to the cycle of violence and criticized Israel’s occupation of Palestinian territories and its collective punishment of Palestinians.

“Using the death of the three Israelis to exact collective punishment on the Palestinian people as a whole and on its legitimate desire to be free is a tragic exploitation of tragedy and promotes more violence and hatred,” said a July 8 statement from the Assembly of Catholic Ordinaries of the Holy Land.

“We need to recognize that the kidnapping and cold-blooded murder of the three Israeli youth and the brutal vengeance killing of the Palestinian youth are products of the injustice and of the hatred that the occupation fosters in the hearts of those prone to such deeds,” the church leaders said, but added that the deaths “are in no way justifiable.”

In early July, Israel launched airstrikes into the Hamas-controlled Gaza Strip, killing more than 40 Palestinians — including children, elderly and militants — in a circle of escalating violence that began with the discovery of the bodies of three kidnapped Israeli teens and the brutal apparent revenge killing of a Palestinian teen. The Israeli offensive, dubbed Operation Protective Edge, has hit hundreds of targets, while more than 100 missiles have been launched into southern Israel, reaching into the center of the country and Jerusalem as well.

The ordinaries, who include Catholic bishops and the Franciscan custos of the Holy Land, called the situation in Gaza “an illustration of the never-ending cycle of violence in the absence of a vision for an alternative future.”

They criticized Israeli “leadership that continues to foster a discriminatory discourse promoting exclusive rights of one group and the occupation with all of its disastrous consequences. Settlements are built, lands are confiscated, families are separated, loved ones are arrested and even assassinated. The occupation leadership seems to believe that the occupation can be victorious by crushing the will of the people for freedom and dignity. They seem to believe that their determination will ultimately silence opposition and transform wrong into right.”

The church leaders said the mourned all those, Israeli and Palestinians, who had died.

“Some of their faces are well known because the media have covered in detail their lives, interviewing their parents, bringing them alive in our imaginations, whereas others — by far more numerous — are mere statistics, nameless and faceless. The selective coverage, mourning and memory are themselves part of the cycle of violence,” they said.

The church leaders also said the “violent language of the Palestinian street that calls for vengeance is fed by the attitudes and expressions of those who have despaired of any hope to reach a just solution to the conflict through negotiations. Those who seek to build a totalitarian, monolithic society, in which there is no room for any difference or diversity, gain popular support, exploiting this situation of hopelessness. To these we also say: Violence as a response to violence breeds only more violence.”

“We need radical change,” they said. “Israelis and Palestinians together need to shake off the negative attitudes of mutual mistrust and hatred.” They called for educating the younger generation “in a new spirit that challenges the existing mentalities of oppression and discrimination,” but they also called for a change in political leaders.

“We must find leaders who are clear-sighted and courageous enough to face the urgency of the present situation and to take the difficult decisions that are needed, leaders who, if necessary, are ready to sacrifice their political careers for the sake of a just and lasting peace. Such leaders have the vocation to be healers, peacemakers, seekers of justice and visionaries of the alternatives to the cycle of violence,” they said, recalling Pope Francis’ separate meetings with Israeli and Palestinian leaders during his May visit to the Holy Land and “his incessant call for justice and peace.” 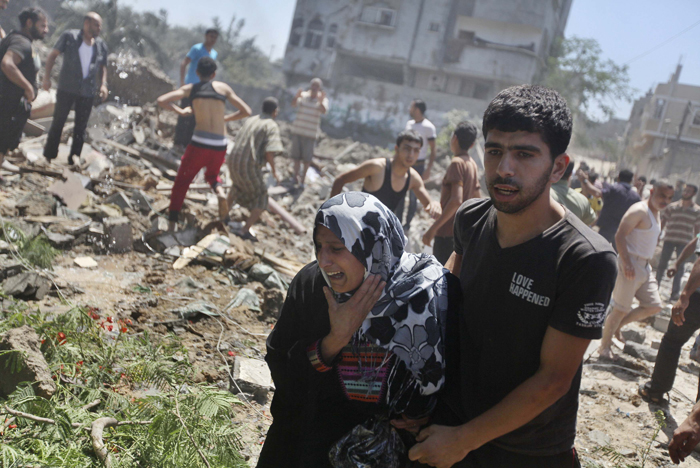 A Palestinian woman reacts following what police said was an Israeli airstrike on a house in Gaza City July 9. (CNS photo/Majdi Fathi, Reuters)