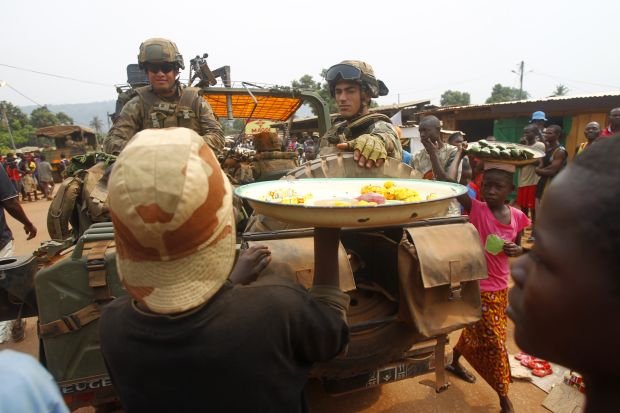 French troops lead a disarmament operation in Bangui, Central African Republic in February during what has been called a humanitarian crisis. (CNS photo/Legnan Koula, EPA)

CAPE TOWN, South Africa (CNS) — Among almost a million people displaced from their homes through conflict in the Central African Republic are 9,000 people who have found refuge at a seminary in the capital, Bangui.

An “unbelievable number of children” are among these refugees at St. Mark’s Major Seminary, said Bishop Richard E. Pates of Des Moines, Iowa, noting that the mean age in the country is 18.

“Everyone there has been traumatized. They have all witnessed atrocities,” he said, noting that the “generosity and kindness” of the church authorities who keep the seminary’s gates open to those fleeing violence “serve as an example of how to react in a crisis.”

Thousands of people have been killed in the Central African Republic since the majority Christian state descended into ethno-religious warfare in March 2013, and almost a quarter of the country’s 4.6 million inhabitants have been displaced.

The former French colony has a “strong presence” of French and other peacekeepers, with the result that Bangui is secure and there are “continuing efforts to secure the rest of the country,” Bishop Pates said.

“People seem to have a glimmer of hope that enables them to start up their lives again,” he said in a July 20 telephone interview from Bangui.

The U.S. delegation met with the interim president of the Central African Republic, Catherine Samba-Panza, who is Catholic, Bishop Pates said.

“She told us of the urgent need to restore order and to develop the economy,” he said, noting that Samba-Panza has a “good relationship” with the country’s bishops’ conference and is “familiar with the strong Catholic principles of social justice.”

The bishop said the country’s bishops told him Central African Republic “has a history of corrupt governments that are not interested in the common good and that this needs to change, along with the culture of impunity.”

“People are literally getting away with murder,” he said, noting that the bishops and other religious leaders who have formed an interfaith forum emphasized the need for people to be held accountable for their actions.

“Without a process of justice, the violence will continue,” he said.

Religious and other leaders told the U.S. delegation that their “focus is on how to rebuild a country that is in shambles” and emphasized the “need for healing from the trauma people have experienced,” he said.

With a population of mostly young people, the Central African Republic must prioritize education, jobs and health care, Bishop Pates said, noting that he saw “great frustration” among the youth who see no future for themselves.

In Juba, South Sudan, the trauma of the current ethnic conflict “has affected its people to their bones, and it will be a long time before healing can take place,” Bishop Pates said.

The Rev. Peter Gai Lual Marrow, moderator of the Presbyterian Church in South Sudan, told Bishop Pates he had witnessed “unbelievable atrocities” in the conflict that since mid-December has claimed thousands of lives and forced more than 1 million people to flee. The Presbyterian moderator “saw an unprecedented level of terror — people were killed and their bodies strewn outside the town to be eaten by dogs and birds,” the bishop said.

After South Sudanese President Salva Kiir fired his deputy, Riek Machar, in July 2013, the latest fighting began. The political rivalry reopened deep ethnic tensions in the country that has more than 60 ethnic groups. Kiir comes from the dominant Dinka group, while Machar is from another major tribe, the Nuer.

“Great harm and damage has been done to South Sudan through the rivalry of these two men, who are following their own agenda rather than that of the country,” he said.

Near Juba’s airport, people displaced by the fighting are living in conditions that are “severe, barely tolerable,” with little sanitation and an “almost inhumane” lack of facilities, said Bishop Pates. About “10,000 people, including thousands of children, are living in a very concentrated area,” he said.

Bishop Pates said he was “touched by their remarkable spirit despite their very difficult circumstances.”

While the political leaders “try to use the church to create divisions,” the Catholic, Episcopalian and Presbyterian leaders “are strongly linked and working together for peace, human rights and reconciliation,” Bishop Pates said.

“They have a vision of an inclusive country where resources are shared and used for education, jobs and development,” he said.

South Sudan needs the world’s help to achieve peace, and “in spite of our deep disappointment” that there is new conflict after the country’s hopeful and celebrated start, “we need to help and support its people,” Bishop Pates said.

“Radical improvement” to living conditions in Juba is needed, said the bishop, noting that on a visit to the mother of a Des Moines-based priest he saw severe poverty.

Despite having no running water or other resources that the developed world takes for granted, the priest’s mother, in her 70s, “has very strong faith, remarkable spirit and vigor,” Bishop Pates said.

While she and many others in her community “are very positive in the midst of enormous difficulties, we must not take advantage of this attitude,” he said.

The world “must address the needs of the poor, to enable people to live in a dignified manner,” he said.