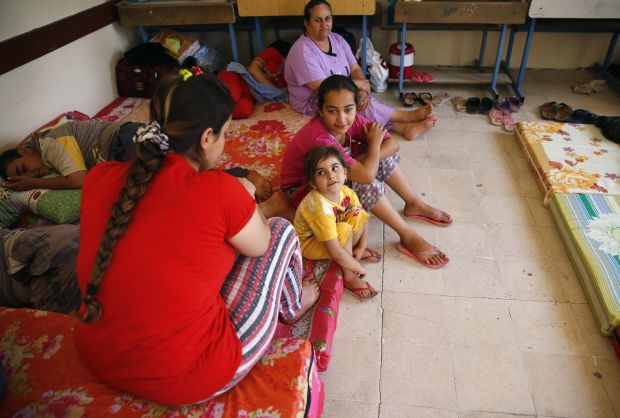 A Christian family who fled from the violence in Mosul rests in a shelter June 27 in Irbil, Iraq. Chaldean Catholic Patriarch Louis Sako of Baghdad said the city of Mosul "is almost empty of Christians." (CNS photo/Ahmed Jadallah, Reuters)

AMMAN, Jordan (CNS) — The patriarch of the Chaldean Catholic Church in Baghdad called the current situation in his country “perhaps the darkest and most difficult period in (the church’s) recent history.”

He told CNS that there has been no word about the group’s whereabouts or who may have abducted them, despite assurances of help from many quarters.

Patriarch Sako also said the city of Mosul “is almost empty of Christians.”

“There are only about 200 (Christian) individuals that may be left there,” he said. “The churches are closed. There was no Mass on Sunday. There are no priests.”

Islamic State of Iraq and the Levant militants reportedly have occupied both Mosul’s Chaldean Catholic and Syriac Orthodox cathedrals, removing the crosses at the front of the buildings and replacing them with the Islamic state’s black flag.

Patriarch Sako compared the current situation for the church in his country to the biblical tale of when Jesus slept in the boat while the storm raged and his disciples were terrified, as recorded in the Gospel of St. Mark.

“Despite everything, we do not despair,” he said. We are invited and pressed to awaken Christ, to take advantage of our faith and continue in a calm sea.”

He urged the faithful to pray for the safe return of the group and for the future fate of all Christians in Iraq.

“I do believe, of course, that prayers can make miracles,” he said. 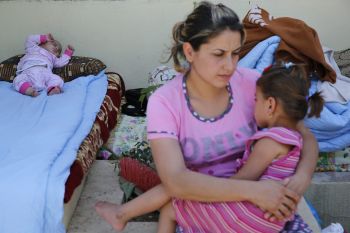 A Christian woman who fled from the violence in Mosul, Iraq, holds her daughter as her baby sleeps June 27 at a shelter in Irbil, Iraq. (CNS photo/Ahmed Jadallah, Reuters)

The kidnapped Chaldean Daughters of Mary, Sister Miskintah and Sister Utoor, and three orphans went missing in Mosul, the first city to fall in June to militants of the Islamic State of Iraq and the Levant, who have overrun vast swathes of territory across five Iraqi provinces north and west of the capital, Baghdad.

“Until now, we don’t know who is behind the kidnapping and where they are,” Patriarch Sako told CNS.

“We have contacted many people, including Muslim imams, sheiks, and private individuals. They have promised us that they are trying to find out something, but nothing has happened. They don’t know. We’ve also asked the Kurds to look for them,” he said, his voice full of concern and strain.

Kurdish fighters have promised to defend Christians and other minorities in northern Iraq against the recent onslaught of Islamist extremists.

Patriarch Sako said it was not clear whether the Islamic State of Iraq and the Levant was involved in the abductions.

“We don’t have exact details,” he said. “The situation is very confusing. Nobody knows.”

The group went missing around the time the militants shelled Christian villages outside of Mosul, including Qaraqosh, forcing more than 40,000 Christians to flee in terror, many with just the clothes on their backs. The majority of Qaraqosh’s 40,000 inhabitants are Syriac Catholics.

The two sisters were responsible for managing an orphanage in a Christian neighborhood in Mosul. The orphans, two girls and a boy, have been identified as Hala Salim, Sarah Khoshaba, and Aram Sabah.

“We are asking for their release because they are innocent,” Patriarch Sako told CNS.

“They have nothing to do with the policy or the situation taking place in Iraq. They are not party to these events,” he said, referring to sectarian violence convulsing Iraq as Islamic State of Iraq and the Levant, aided by Sunni Muslim tribesman and Saddam Hussein loyalists, have declared an Islamic state or caliphate across vast stretches of Iraq and Syria.

“They (nuns) are innocent people helping people, doing good things for everybody: Christians and Muslims,” he emphasized.

“We lived together side-by-side (with Muslims) for 14 centuries,” the patriarch said. “We still want to communicate and live together.”

Many of those left had lived until recently in Ninevah province, of which Mosul is the capital.

NEXT: The mafia and religion make headlines after pope’s condemnation