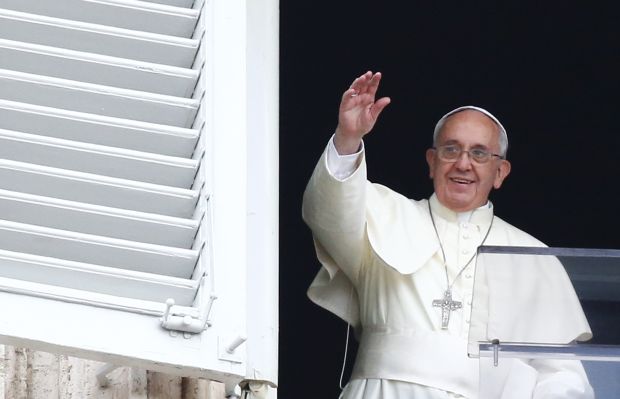 Pope Francis waves as he leads his July 13 Angelus prayer in St. Peter's Square at the Vatican. Pope Francis called for an end to the flare-up of hostility between Palestinians and Israelis, urging leaders to listen to the call of the people who want peace. (CNS photo/Tony Gentile, Reuters)

VATICAN CITY (CNS) — Praying for peace is never a useless exercise — it keeps evil at bay and helps people not give in to violence, Pope Francis said.

In response to “tragic events” unfolding in the Middle East in early July, the pope delivered “a heartfelt appeal to continue to pray with persistence for peace in the Holy Land.”

Fighting between Israelis and Palestinians in the Gaza Strip and rocket exchanges with southern Lebanon have escalated since Israel launched airstrikes against Gaza July 8. More than 150 Palestinians have been reported killed by the airstrikes, which, Israel has said, are targeting the homes of militants.

The pope made his appeal July 13 after reciting the Angelus from the window of the papal studio in the apostolic palace with tens of thousands of people gathered below in St. Peter’s Square.

He recalled the gathering for peace at the Vatican June 8 in which he brought Israeli President Shimon Peres, Palestinian President Mahmoud Abbas and Orthodox Ecumenical Patriarch Bartholomew of Constantinople together to pray for “the gift of peace” and to listen to “the call to break the spiral of hatred and violence.”

“Someone might think that that encounter may have been in vain. But no! Prayer helps us not let ourselves be defeated by evil or resign ourselves to violence and hatred having the upper hand over dialogue and reconciliation,” he said.

The pope called on all sides, as well as politicians on the local and international level, to never stop praying, to do everything possible to end the hostilities and to bring about “peace for the good of all people.”

He then invited all those gathered in the square to join him in a moment of silent prayer. The pope then asked God to help “teach us peace, guide us toward peace.”

“Open our eyes and our hearts,” he prayed, “and give us the courage to say: ‘War, never again!’ ‘All is destroyed with war!'”

The pope asked God to help everyone have “the courage to carry out concrete gestures of building peace. Make us willing to listen to the cries of our fellow citizens, who ask us to transform our weapons into instruments of peace, our fears into confidence and our tensions into forgiveness.”

NEXT: Pope: Stop throwaway culture now before another generation is lost