Pope: Stop throwaway culture now before another generation is lost 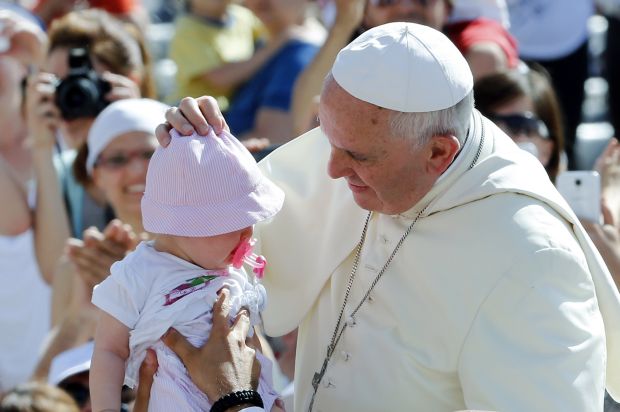 VATICAN CITY (CNS) — Pope Francis urged a group of economists and financiers to help reverse the current “throwaway” culture and put people at the center — not the fringes — of monetary strategies and policies.

Children, the elderly and young adults are all being rejected “because they’re not useful,” he said. “Who’s going to be disposed of next? Let’s stop ourselves in time, please,” he said July 12.

The pope spoke to a group of experts participating in an international seminar organized by the Pontifical Council for Justice and Peace. About 70 people, many of them leading economists, central bankers, heads of international and intergovernmental organizations and church leaders, came together July 11-12 to discuss ways economic systems and policies could work toward “a more inclusive economy” and the common good.

The pope thanked participants for meeting to discuss such important issues and urged them to reflect on the current situation “without fear and with intelligence.”

He said people today have been stripped of their humanity and turned into cogs of a “social, economic system, a system where inequalities rule.”

He likened the process to the way Italian “grappa” or brandy is made, in which grapes are distilled and transformed into something completely different.

Individuals, he said, are also being run through a sort of “organizational” distillery — transforming their original essence, making them “lose their humanity” and “become an instrument of the system.”

He said there is “a politics, a sociology” and a mindset of people being “disposable; you throw away what isn’t needed, because man isn’t at the center.”

Low birthrates show that children are considered disposable, as are the elderly, and also an “entire generation of young people, and this is very serious.”

High unemployment for young adults has created a “neither-nor” generation of young people who “neither study nor work,” he said, because — for so many — getting a higher education isn’t possible and there are no jobs.

People need to be made the focus again and become “the center of society, of thinking, of reflection,” he said, urging the group to study and reflect “so that man is not disposed of.”

That the human person should be at the center of all things, “isn’t theology, it’s not philosophy, it’s human reality,” the pope said.

NEXT: Church of England votes for women bishops