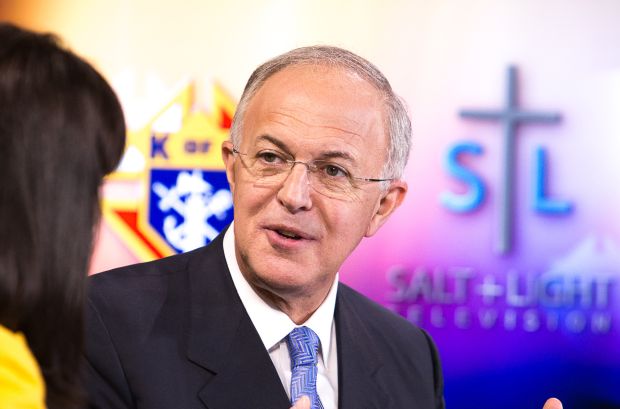 Supreme Knight Carl A. Anderson speaks to the media Aug. 5 during 132nd annual Supreme Convention of the Knights of Columbus in Orlando, Fla. (CNS photo/Tom Tracy)

ORLANDO, Fla. (CNS) — As an international fraternal organization, the Knights of Columbus is well-positioned to follow Pope Francis’ witness of “love for the sick, the suffering and the poor,” said Supreme Knight Carl A. Anderson.

That “extraordinary witness” and the pope’s admonition to all to cast aside indifference have “captured the imagination of the world,” he said Aug. 5 at the opening business session of the Knights’ 132nd Supreme Convention in Orlando.

“As Knights of Columbus, we are well-positioned to respond,” said Anderson.

He made the remarks in a lengthy annual report detailing the organization’s accomplishments and initiatives in 2013.

The Aug. 5-7 convention celebrated a year in which the organization reported an all-time record for charitable giving: more than $170 million and more than 70.5 million hours of service to charitable causes in the United States and elsewhere the Knights are active.

Response to unexpected tragedies played a large role in members’ activities last year, according to Anderson, while the Knights continued their support within their communities for the Knights of Columbus Coats for Kids and Food for Families initiatives; programs for those with intellectual disabilities; blood drives; and partnerships with Habitat for Humanity, Special Olympics and the American Wheelchair Mission.

Knights were part of relief efforts following two natural disasters in the Philippines; tornadoes in Moore, Oklahoma; floods in Alberta, Canada; the factory explosion in West, Texas; and the Boston Marathon bombing.

Anderson noted the year also saw the Knights continue their support for the victims of Hurricane Sandy, the October 2012 super storm, and for the people of Newtown, Connecticut, as they recovered from the late 2012 school shooting that left 20 children and seven adults dead.

“Charity has been at the heart of the Knights’ mission for the past 132 years,” said Anderson. “Whether with funds or service, and whether quietly helping someone overcome a personal tragedy or assisting in the aftermath of a widely known humanitarian disaster, the outpouring of charity by our members produces meaningful results, especially by helping to bring peace of mind to those who find themselves in incredibly difficult situations.”

— Quebec led all Knights of Columbus jurisdictions with charitable donations of more than $11 million.

— Record membership overall, including a new state benchmark of more than 100,000 members, in Texas.

— Growth of membership and volunteer hours in the United States, Canada, Mexico, Central Europe and Asia.

— A new family program in advance of next year’s World Meeting of Families in Philadelphia.

Anderson made special mention of the establishment of the first Knights of Columbus council in South Korea, a nation with 5.5 million Catholics and which he described as the fastest growing Catholic community in the world.

He noted Pope Francis’ trip to South Korea Aug. 14-18, saying that visit and a papal trip to the Philippines Jan. 15-19 “will play a significant role in the future of the Knights of Columbus.”

With regard to the federal Affordable Care Act, Anderson said the Health and Human Services mandate that most Catholic employers provide contraceptive coverage “cannot be fixed and it must be repealed.”

He pointed to the U.S. Supreme Court’s Hobby Lobby decision this summer, which said closely held for-profit companies could be exempted from some requirements of the federal health care law because of the owners’ religious beliefs. He said the Knights hope the high court will follow that ruling with one “to protect the religious liberties of entities such as the Little Sisters of the Poor,” who are challenging the process required to be exempted from the mandate.

“What are we to tell our children: that government has become the final arbiter of conscience? That the voice of government must always have the last word?” he asked.

Anderson said that while some politicians try to divide the American people on social issues, the Knights’ polling “has found great unity among Americans,” even on abortion, “an issue often considered the most divisive.”

“A majority of Americans believe life begins at conception, and more than six in 10 think abortion is morally wrong. And, perhaps most importantly, more than eight in 10 Americans say that laws can protect both the well-being of a woman and the life of her unborn child,” he said.

Nearly 90 archbishops and bishops — including 11 cardinals — were expected to join approximately 2,000 Knights and family members for the convention. The theme of this year’s conference is “You Will All Be Brothers: Our Vocation to Fraternity.”

NEXT: First black priests in U.S. ‘opened door for rest of us,’ says pastor