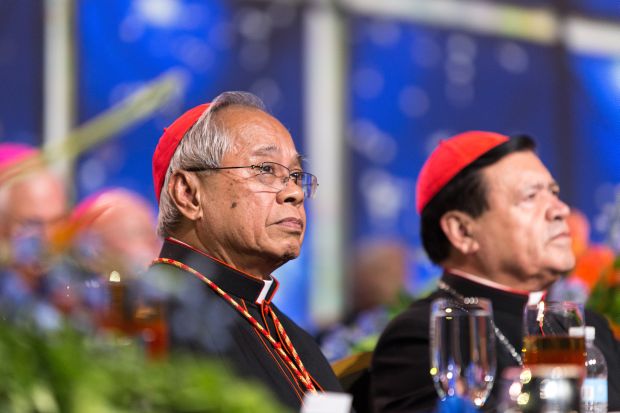 Philippine Cardinal Orlando Quevedo of Cotabato and Cardinal Norberto Rivera Carrera of Mexico City look on Aug. 5 at the annual States Dinner of the 132nd Supreme Convention of the Knights of Columbus in Orlando, Fla. (CNS photo/Tom Tracy)

ORLANDO, Fla. (CNS) — A cardinal from the Philippines visiting the U.S. thanked the Knights of Columbus for the organization’s financial support following last year’s devastating Typhoon Haiyan and noted the upcoming visit of Pope Francis next January.

“The Knights worldwide sent more than $750,000 for thousands upon thousands of Filipinos whose lives and properties were destroyed by the strongest typhoon ever recorded to reach landfall,” said Cardinal Orlando Quevedo of Cotabato, Philippines, who spoke at the annual States Dinner Aug. 5 during the 132nd Supreme Convention of the Knights of Columbus in Orlando.

The Aug. 5-7 convention drew more than 2,000 Knights and their family members and guests.

Knights throughout the Philippines immediately mobilized their councils to provide food, shelter, clothes, cooking utensils, water and medicines following the typhoon, the cardinal said. “They have also contributed to the reconstruction of centuries-old churches that were severely damaged by a strong earthquake that hit the island province of Bohol just before Typhoon Yolanda,” as it is known in the Philippines.

He added, “This is global and local mobilization of fraternity at its best.”

“The service of charity is a service of fraternity,” Cardinal Quevedo continued. “But without a heart that beats in unison with the hearts of the poor, the marginalized, the victims of human injustice — personal or structural — humanitarian assistance will simply be the sound of cymbals and trumpets, with motives that are a world different from the widow’s mite.”

The cardinal also noted that his country eagerly awaits Pope Francis’ visit, scheduled for Jan. 15-19, after he spends several days in Sri Lanka. Church and government officials have not given details of the visit, saying instead that specifics would be released before the end of the year. The pope is expected to visit Manila and the Visayas, in the central Philippines.

Cardinal Quevedo told the Knights that his late father was a fourth-degree Knight. “Like father like son. But he was a grand Knight. I don’t think I’ll ever be one.”

A surprise guest speaker at the States Dinner was actor Gary Sinise, who is perhaps best known for his role as Lt. Dan in the 1994 film “Forrest Gump.” He told the Knights about his ongoing charitable work, his admiration for veterans, his wife’s struggles with overcoming alcohol addiction and his family’s eventual conversion to the Catholic faith

Knights’ funding has helped the Gary Sinise Foundation build at least one “smart home” for disabled U.S. veterans, and the Knights are reviewing the possibility of further collaborations and construction projects with the foundation, according to Supreme Knight Carl A. Anderson.

Also in Orlando was Msgr. Pedro Quitorio, director of media for the Catholic Bishops’ Conference of the Philippines. He told Catholic News Service that the church in the Philippines has social media platforms and a website ready to detail the papal visit.

“Although I am not privy yet to all the details, I would guess for sure that he will be meeting with some typhoon victims at a gathering (in Tacloban),” Msgr. Quitorio said in an interview.

He said church officials are keenly aware of the slow pace of rebuilding the country’s infrastructure and livelihood but that the devastation and rehabilitation goes even deeper than that.

“When you have 10,000 dead and that kind of suffering — even if you are given shelter, clothing and food — the deep-seated (needs for rehabilitation) are in the heart and the visit of the Holy Father will address that grief, the rehab of the heart and of the mind,” the priest said.

In terms of the rebuilding efforts, Msgr. Quitorio said Catholic Relief Services, the U.S. bishops’ overseas relief and development agency, and Caritas Internationalis have given the most material support by far — more than any governments.

“The rebuilding efforts have been done mostly by the international aid organizations, notably Catholic Relief Services — which has done so much, from relief to rehab to education to rebuilding houses,” the priest said.

“Caritas Internationalis estimates it will take three to five years to make the situation stable because the devastation is so great and no one can give the answer,” he said. “People are living in tent cities.”

The typhoon victims and children have be seen holding signs that read, ‘Holy Father, please come,'” Msgr. Quitorio noted, adding that he expects the upcoming visit could equal that of the record-setting 6 million who turned out for the 1995 World Youth Day closing Mass in Manila.

“At that time the world stopped, there was no crime, no traffic. Hopefully it will be the same this time,” he said.

“Our challenge will be to bring the media and people to Tacloban, the ground zero where the typhoon hit really hard and where the pope will go to meet the victims. It will be difficult to bring visitors there with no facilities,” he added.

PREVIOUS: Pope’s Korea trip seen as chance to for Catholics to renew their faith