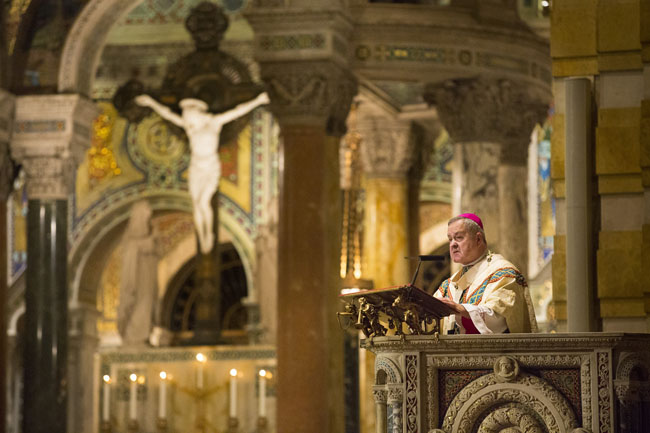 St. Louis Archbishop Robert J. Carlson gives the homily during a votive Mass for peace and justice at the Cathedral Basilica of St. Louis Aug. 20. The Mass was planned following the protesting and unrest in Ferguson after the shooting death of 18-year-old Michael Brown by a Ferguson Police officer. (CNS photo/Lisa Johnston, St. Louis Review) 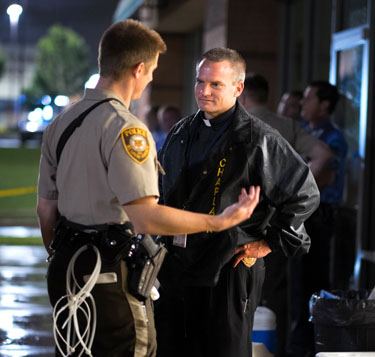 Father Mike Boehm, a chaplain with the St. Louis County Police Department, speaks with an officer Aug. 16 at the incident command post for the violence continuing in the aftermath of Michael Brown’s shooting death by a police officer in Ferguson, Mo. (CNS photo/Teak Phillips, St. Louis Review)

ST. LOUIS (CNS) — With the strife and violence continuing in the aftermath of Michael Brown’s shooting death by a police officer in Ferguson, more than 500 St. Louis Catholics gathered for a votive Mass for peace and justice Aug. 20 at the Cathedral Basilica of St. Louis.

Brown, 18, was black, and Darren Wilson, the police officer who shot him Aug. 9, is white.

St. Louis Archbishop Robert J. Carlson celebrated the Mass with 27 priests and, in his homily, laid out five important steps to “dismantle systemic racism,” which has become evident in Ferguson:

— “I am re-establishing today the Human Rights Commission in the Archdiocese of St Louis.”– “I am asking the Charles Lwanga Center to begin a study and offer solutions to decrease violence in our communities and in our families.”

— “I pledge an ongoing commitment to provide a pathway out of poverty by providing scholarships so that young people can receive a quality education in our Catholic schools.” (He noted that 3,000 children have received scholarships in the last year.)

— “I pledge my support and the support of the archdiocese to assist the churches in Ferguson to deal with issues of poverty and racism.”

— “Finally, I am asking each priest in the Archdiocese of St. Louis to offer a Mass for Justice and Peace.”

As Archbishop Carlson noted, “This is a modest beginning, but begin we shall.”

“There is more that will need to be done, and we will work to open dialogue with the churches, community leaders and people of Ferguson,” he said. 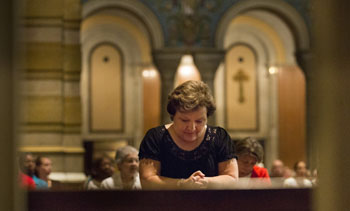 Mary Myers prays in the Divine Mercy Chapel before the votive Mass for peace and justice at the Cathedral Basilica of St. Louis Aug. 20. (CNS photo/Lisa Johnston, St. Louis Review)

“We ask for the wisdom and compassion and courage to address the brokenness and division that confronts us as we recognize there is an irrepressible yearning present in the heart of each person for good,” he said, noting that the church has been down this road before.

In 1963, St. Louis priests made a pledge on the equality of all people and that summer the Human Rights Commission was established.

“Many priests and religious are still living who walked with (the Rev.) Martin Luther King defending the dignity of every human person,” he said.

“In the face of brokenness and shame and heartbreak Jesus calls us to come to him and encourages us so that we do not walk away,” he continued. “The time has come for us to acknowledge decades of hurt and mistrust and suspicion and prejudices and, yes, even a tragic death. … We hear the Lord’s gentle voice as he invites us to hunger and thirst for righteousness, and his invitation to each one of us to be peacemakers.”

The Ten Commandments and the Eight Beatitudes provide Catholics with a roadmap to address the underlying issues in the death of Brown and what has followed, Archbishop Carlson said.

“Like the first disciples, we need to leave our ordinary way of doing things behind and follow Jesus, a journey that is never easy,” he said.

Prayer is necessary for the journey, Archbishop Carlson said, citing Blessed Teresa, who started her day with an hour of eucharistic adoration.

“It was only after prayer that she would leave to serve,” he said. “Prayer is the inexhaustible source of our service.”