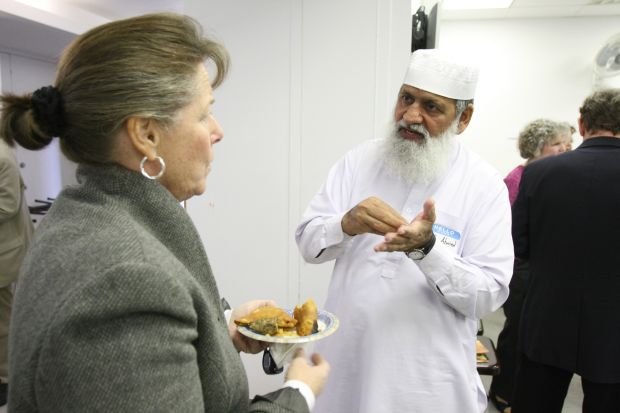 Imam Hafiz Ahmed chats with Marianne Lannig of St. Edward the Confessor Parish in Syosset, N.Y., during an open house at the Islamic Center of Long Island in Westbury, N.Y., in 2010. (CNS photo/Gregory A. Shemitz)

WASHINGTON (CNS) — The U.S. bishops’ Committee for Ecumenical and Interreligious Affairs said the Catholic Church remains committed to dialogue with leaders of other religions and Muslims in particular.

Reiterating that commitment is especially needed now, the committee said in a statement released late Aug. 19, because tensions between Christians and Muslims have never been more acute and some Catholics and members of other denominations have rejected interfaith talks.

“Sadly, in recent years, there has been a deliberate rejection of this call to engage in dialogue with our Muslim brothers and sisters by some in the Catholic Church and in other ecclesial families,” said the U.S. Conference of Catholic Bishops’ committee, whose chairman is Auxiliary Bishop Denis J. Madden of Baltimore.

“We understand the confusion and deep emotions stirred by real and apparent acts of aggression and discrimination by certain Muslims against non-Muslims, often against Christians abroad,” it said. “We, and increasingly our Muslim partners in dialogue, are concerned about these very real phenomena.”

The statement did not specify types of aggression, but in recent months thousands of fighters with the Islamic State, or ISIS, seized control of large parts of northern and central Iraq and eastern Syria, leading to a mass exodus of Christians and other religious minorities from those regions. They were told by militants to flee, convert to Islam or be killed.

Militants have released videos on Facebook and other social media showing mass executions of Christians and other Iraqis. According to some estimates, as many as 1,500 people were killed in July.

“Along with many of our fellow Catholics and the many Muslims who themselves are targeted by radicals,” the USCCB committee said, “we wish to voice our sadness, indeed our outrage, over the random and sometimes systematic acts of violence and harassment — acts that for both Christians and Muslims threaten and disrupt the harmony that binds us together in mutual support, recognition and friendship.”

“It is our belief that the most efficient way to work toward ending or at least curtailing such violence and prejudice is through building networks of dialogue that can overcome ignorance, extremism, and discrimination and so lead to friendship and trust with Muslims,” the committee said.

The statement noted that for the past 20 years the committee has been involved in official dialogues with several national Muslim organizations.

“These dialogues have already produced many fruits, not least of which include jointly prepared documents on education, marriage and revelation,” it said. “Perhaps most importantly, our work together has forged true bonds of friendship that are supported by mutual esteem and an ever-growing trust that enables us to speak candidly with one another in an atmosphere of respect.”

The committee said its mandate to engage in dialogue with Muslims comes from “Nostra Aetate,” the Second Vatican Council’s Declaration on the Relationship of the Church to Non-Christian Religions.

Regarding Islam, the council said “the church has also a high regard for the Muslims” and that despite centuries of conflict urged “that a sincere effort be made to achieve mutual understanding.”

The committee statement said that “Nostra Aetate” “has been consistently upheld by recent popes.”

For example, St. John Paul II “affirmed the need for dialogue with Muslims on numerous occasions throughout his long pontificate.”

More recently, Pope Francis told the Pontifical Council for Interreligious Dialogue in November that “dialogue does not mean renouncing one’s identity” nor accepting compromises on faith and morals.

“Like the pope,” the committee said, “we are convinced that the encounter and dialogue with persons different than ourselves offers the best opportunity for fraternal growth, enrichment, witness and ultimately peace.”

NEXT: At Mass, archbishop outlines steps to ‘dismantle systemic racism’