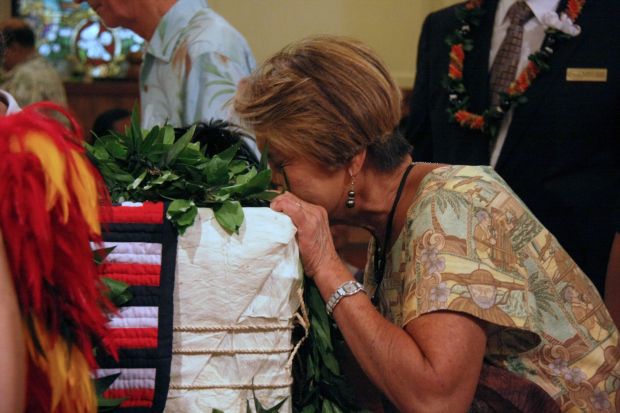 Nearly 700 people packed the church that first welcomed Mother Marianne 130 years ago when she first stepped foot on Oahu to begin her mission of charity to those no one else would dare touch.

The event incorporated the church’s midday prayer and a Mass of thanksgiving, with Honolulu Bishop Larry Silva as the principal celebrant.

Sealed in a 48-by-20-by-12-inch zinc-coated metal box, St. Marianne’s remains were driven with police escort to the cathedral in a white hearse from the convent of the Sisters of St. Francis in Honolulu. They had arrived there July 27 from Syracuse, New York.

After a formal greeting outside the cathedral by the bishop and other diocesan officials, the box, wrapped in white Hawaiian tapa cloth and draped with a traditional Hawaiian quilt decorated with a Hawaiian flag pattern, was carried by four Franciscan sisters into the church on a canoe-shaped platform made of koa wood.

Accompanying the remains in procession were about 40 Sisters of St. Francis and members of Hawaiian royal societies.

Many of the mostly Hawaii-born Sisters of St. Francis wore what could be regarded as a contemporary habit, variations of dress using fabric decorated with a colorful block art print depicting St. Marianne and St. Damien de Veuster.

The ceremony that followed included a traditional hula — a single male dancer in long black pants and long-sleeved white shirt accompanied by a Hawaiian chanter paying tribute to St. Marianne.

The service also included brief reflections by Sister Roberta Smith, general minister of St. Marianne’s religious community, the Sisters of St. Francis of the Neumann Communities, and others.

“How fitting that she be placed here in a place of peace. She brought peace to many people,” Sister Roberta said.

“She had the great courage to step out into the unknown,” she said. “Her simple yes affected a whole group of people. She brought love, care, dignity, respect to those who were cast off.”

Sister Roberta said that her congregational “sister” would be “flabbergasted” at the outpouring of affection and appreciation expressed in the cathedral that day.

But she said St. Marianne’s “great love” was a gift “not only for Hawaii but for the whole world.”

Clarence “Boogie” Kahilihiwa spoke for the remaining Hansen’s disease patients of Kalaupapa, Molokai, several of whom were there for the saint’s homecoming. St. Marianne served in Kalaupapa for 30 years.

“Aloha mai kakou,” he said in Hawaiian, expressing a fond welcome to all.

“We of Kalaupapa are so happy that St. Marianne’s remains have returned home to Hawaii,” he said.

“She was so special to our people. She cared for all with aloha, compassion and dignity,” Kahilihiwa said. “We love her.”

He thanked the bishop and the diocese of accepting the responsibility “to care for her.”

A 20-minute period between the formal midday prayer and the start of Mass at noon allowed time for veneration of the remains. What started as a single line of Sisters of St. Francis turned into a crush of faithful silently inching their way toward to flower-laden box to lay a hand, say a prayer or place a lei.

Bishop Silva then concelebrated the Mass with 30 priests, many of whom wore stoles bearing images of St. Marianne and St. Damien on each side. St. Marianne succeeded St. Damien in ministering on Molokai.

The bishop said the “physical proximity” of the saint’s remains provides a spiritual experience more enriching than contemplating her goodness “from afar.”

Using the Hawaiian word for spirit, Bishop Silva said that the bones of the saint have a spiritual power that can heal and move hearts.

“It is the ‘mana’ of St. Marianne that brings us together today,” he said. “The mortal remains of this frail creature of God, made from dust and returning to dust, have an incredible spirit of their own, an aura that makes us want to be near them.”

“We want to touch the relics of this woman who dedicated herself to healing, so that we may be healed and may be healers,” he said.

Bishop Silva said St. Marianne’s “‘mana’ radiates from these mortal bones so that the Holy Spirit may penetrate into our bones and lead us to feed the hungry on our streets, to welcome the stranger on our borders.”

St. Marianne Cope and six companion sisters arrived in Hawaii in 1883 from Syracuse at the request of the Hawaiian Kingdom to help care for natives who had contracted the then incurable Hansen’s disease, or leprosy. What was supposed to be a temporary assignment for the nun, who was the superior of her New York community at the time, turned out to be a permanent one as she chose to stay where she felt she was most needed.

St. Marianne opened a hospital on Maui and a home for the healthy children of leprosy patients before moving in 1888 to the leprosy settlement in Kalaupapa. Among other duties there, she ran Bishop Home, a complex of cottages for the female patients. She died of natural causes in 1918 in Kalaupapa and was the only Sister of St. Francis to be buried there. She was canonized by Pope Benedict XVI in 2012.

In the 125 years since her arrival, her sisters have continued their ministry in Kalaupapa in addition to opening hospitals and schools on other islands and attracting hundreds of local vocations.

St. Marianne’s remains were exhumed in 2005 in preparation for her beatification that year and enshrined in her motherhouse chapel in Syracuse. Their return to Hawaii was necessitated by the closing and relocation of the motherhouse.

At the Cathedral of Our Lady of Peace, the box holding her remains were placed in an existing koa and glass display cabinet that had held a small relic of St. Marianne. A planned renovation of the cathedral will add a small chapel to display relics of St. Damien and St. Marianne. St. Marianne’s remains will be interred beneath the floor of the chapel.

NEXT: Bill would protect faith-based adoption agencies against discrimination