Faith is source of strength for slain Catholic U.S. journalist and his family 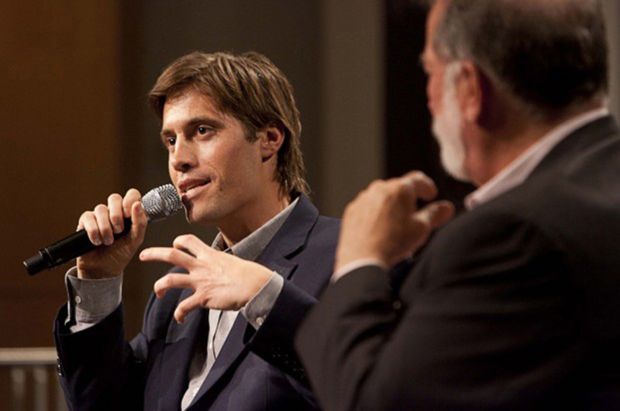 U.S. journalist James Foley speaks at Northwestern University's Medill School of Journalism in Evanston, Ill., after being released from imprisonment in Libya in 2011. Foley, a freelance war correspondent from New Hampshire and a Marquette University alum, was killed at the hands of the Islamic State militant group. (CNS photo/Tommy Giglio, Northwestern University via Reuters) 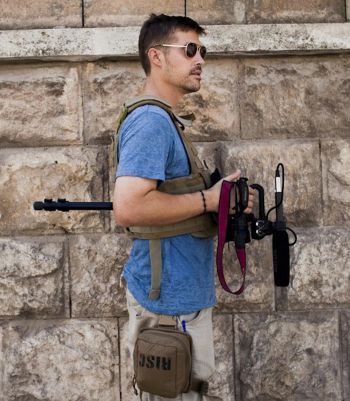 American journalist James Foley, who was kidnapped by unidentified gunmen in November 2012 in Idlib, Syria, is pictured in an undated photo. (CNS photo/Nicole Tung, courtesy GlobalPost via EPA)

ROCHESTER, N.H. (CNS) — In April 2013, the parents of slain U.S. journalist James Foley attended a prayer vigil at Marquette University in Milwaukee to pray for their son, who at that time had disappeared in Syria.

Before Diane and John Foley had confirmation that spring that their son was missing, Diane said she just felt it — he had missed one of his usual phone calls home — and once they knew for sure, the couple said they were relying on their Catholic faith to cope and leaning on prayer to bring him home.

“Faith has been part of family life, but this has deepened my faith because there is our hope. Our hope is that God will take care of Jim,” she told the Catholic Herald in Milwaukee at the time.

That strong faith will likely help the couple, who are members of Our Lady of the Holy Rosary in Rochester, get through the fact that their 40-year-old son was beheaded by militants with the Islamic State extremist group, known as ISIS.

According to an AP story, U.S. officials confirmed a graphic video released Aug. 19 that showed ISIS fighters beheading Foley, a 1996 graduate of Marquette who had been a freelance journalist for the past several years, mostly in the world’s trouble spots. In 2011, he was kidnapped on a Libyan battlefield and held captive in Tripoli for 45 days.

Sometime in late 2012, he went missing in Syria. The last time the Foley family heard from him was before Thanksgiving that year.

A statement about his death attributed to Diane Foley was posted on a Facebook page originally set up to urge James’ release. Family members “have never been prouder of him,” it said.

“He gave his life trying to expose the suffering of the Syrian people,” the statement said, which also urged the militants to release others they are holding hostage. “Like Jim, they are innocents. They have no control over American policy in Iraq, Syria or anywhere in the world.”

ISIS said they killed James Foley in retaliation for U.S. airstrikes on the militants’ strongholds and the group said it would kill another U.S. hostage.

News of his grisly death has sent shock waves around the world, eliciting prayers and statements of support for the family from Catholic leaders, the Marquette community, reporters’ organizations, fellow journalists and many others.

“The brutality of this act is itself evidence of an unspeakable evil that is rampant and inhuman,” New Hampshire Bishop Peter A. Libasci of Manchester. “To the prayers that have been offered since his captivity almost two years ago, we now add our prayers for James’ eternal rest and, in Christ Jesus Our Lord, James’s future resurrection to eternal life.”

“Our prayers also must accompany a sorrowful mother, a grieving father, a deeply pained family and countless friends who have kept vigil all this time,” he said. “May we also pray for those who have embraced the way of darkness and death, that they may turn away from this terrible evil now and forever.”

News reports said the Foleys’ pastor, Father Paul Gousse, was at the family’s house for about 45 minutes Aug. 19. He left without speaking to reporters. The parish posted a notice that the church would be open to all to join in prayer for Jim, his family, friends, colleagues “and all who are still in danger.”

In her statement on Facebook, Diane Foley said: “We thank Jim for all the joy he gave us. He was an extraordinary son, brother, journalist and person. Please respect our privacy in the days ahead as we mourn and cherish Jim.”

James’ sister, Kelly, took to Twitter asking others not to watch the video that shows his beheading: “Please honor James Foley and respect his family’s privacy. Don’t watch the video. Don’t share it. That’s not how life should be.”

Twitter CEO Dick Costolo said on Twitter that anyone sharing the images of the event would have their accounts suspended. “We have been and are actively suspending accounts as we discover them related to this graphic imagery. Thank you.”

In 2011, after he was let go by his kidnappers in Libya, James Foley wrote an article for Marquette magazine on how prayer, specifically the rosary, got him through captivity in a military detention center in Tripoli.

He had been captured with two colleagues, he said. “Each day brought increasing worry that our moms would begin to panic. My colleague, Clare, was supposed to call her mom on her birthday, which was the day after we were captured. I had still not fully admitted to myself that my mom knew what had happened. But I kept telling Clare my mom had a strong faith.

“I prayed she’d know I was OK. I prayed I could communicate through some cosmic reach of the universe to her.”

Foley began to pray the rosary.

“It was what my mother and grandmother would have prayed. I said 10 Hail Marys between each Our Father. It took a long time, almost an hour to count 100 Hail Marys off on my knuckles. And it helped to keep my mind focused,” he wrote. “Clare and I prayed together out loud. It felt energizing to speak our weaknesses and hopes together, as if in a conversation with God, rather than silently and alone.”

Foley also described his experience at Marquette University, which he said “has always been a friend to me. The kind who challenges you to do more and be better and ultimately shapes who you become.” He added that Marquette had never been “a bigger friend to me than when I was imprisoned as a journalist.”

Marquette posted a link to his article along with a statement about his death on the university’s website.

“The Marquette community is deeply saddened by the death of alumnus and freelance journalist James Foley,” the university’s statement said. “We extend our heartfelt prayers and wishes for healing to James’ family and friends during this very difficult time.”

James Foley had majored in history at the Jesuit university, then enrolled at Medill School of Journalism at Northwestern University and earned a master’s degree in 2008.

“(He) had a heart for social justice and used his immense talents to tell the difficult stories in the hopes that they might make a difference in the world — a measure of his character for which we could not be prouder,” the Marquette statement said.

A campus prayer vigil to remember Foley and to support his family was scheduled for Aug. 27 on campus.