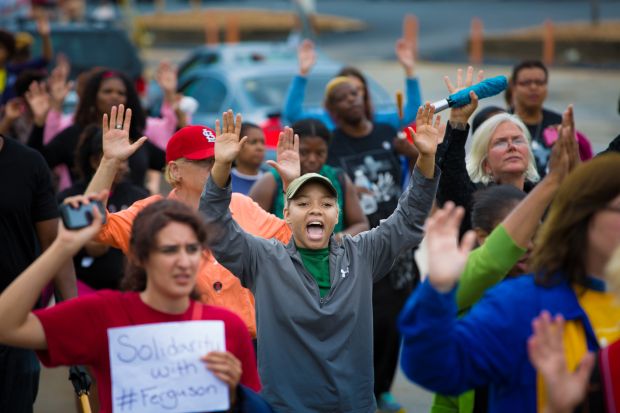 Protesters hold their hands in the air during an Aug. 16 demonstration against the shooting death of Michael Brown in Ferguson, Mo. (CNS photo/Lisa Johnston, St. Louis Review)

“We are all aware of the turmoil and tragedy our St. Louis community is experiencing,” he said in an Aug. 18 letter to Catholics of the archdiocese.

After visiting Ferguson, about 11 miles from downtown St. Louis, and offering prayers at a memorial there to 18-year-old Michael Brown, Archbishop Carlson said he has been observing and reflecting “through much prayer” on what has taken place on a daily basis since the Aug. 9 shooting, the events that have gone back and forth from peaceful protests to violence and looting.

Brown’s shooting has brought renewed attention to deep racial tensions in Ferguson and long-standing divisions between minorities and law enforcement. Brown was black, and the police officer who shot him is white.

“I find strength in the prayer of St. Francis of Assisi: ‘Lord, make me an instrument of your peace,'” Archbishop Carlson said. “In all circumstances, but especially in these difficult times, we are all called to be instruments of peace through our words and actions.”

He quoted Pope Francis as saying: “All men and women of good will are bound by the task of pursuing peace.”

Archbishop Carlson invited Catholics to attend an early evening Mass for peace and justice he planned to celebrate Aug. 20 at the Cathedral Basilica of St. Louis.

He said that during the Mass, a special collection would be taken for funds to assist food pantries and parishes in the Ferguson area that offer assistance to those who have been affected by the looting and destruction of property.

He encouraged all parishes in the archdiocese to offer Masses “for peace in our community” and have other activities such as a Holy Hour or a parish rosary as part of the effort.

As Catholic schools start the new year, he has asked them to begin a daily rosary for peace and to offer special intentions during all school Masses.

He also noted in his letter that Catholic Family Services, an agency of Catholic Charities of the archdiocese, has made counselors available to any Catholic school that requests assistance. The agency has also publicized tips for parents and schools when dealing with crisis situations, he said.

“Pope Francis has encouraged us again and again to ask Our Lady, Undoer of Knots, to intercede for us in difficult circumstances,” Archbishop Carlson said, referring to a special Marian devotion of the pope.

He urged all in the St. Louis Archdiocese to join him in praying to Mary and her son, Jesus, “for peace and justice in our community.”

In an Aug. 13 statement, the new president of Jesuit-run St. Louis University joined the growing call for peace and dialogue.

“Like you, I have watched the events unfolding this week in the North St. Louis County suburb of Ferguson with shock and sadness,” said Fred P. Pestello. “First and foremost, we extend our deepest sympathies to Michael Brown’s family and friends during this heartbreaking time.”

He said the university would hold a nondenominational prayer service in coming days and also would host a forum to talk about the various issues fueling the situation in Ferguson.

“Given our commitment to justice, it also is imperative that we continue our efforts to shine a light on the issues of poverty, violence and racial disparity,” Pestello said.

NEXT: Faith is source of strength for slain Catholic U.S. journalist and his family