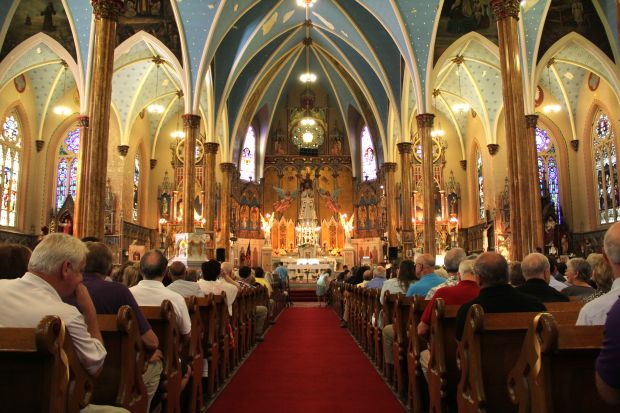 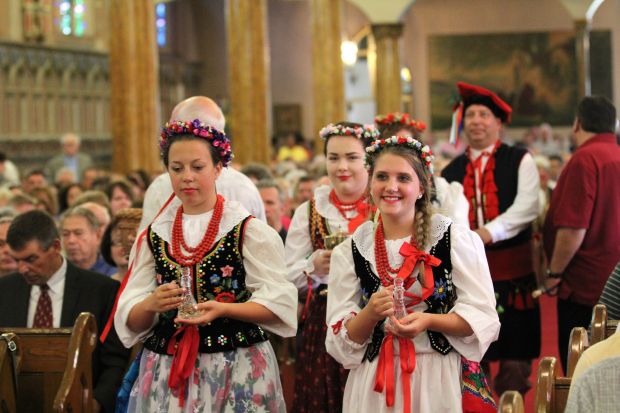 Members of the Polish Women’s Alliance of America’s Zamek Dancers present the offertory gifts during Mass at the historic St. Albertus Church in Detroit Aug. 10. St. Albertus is no longer an active parish but the church remains open as a center for Polish heritage. (CNS photo/Jonathan Francis, Archdiocese of Detroit)

DETROIT (CNS) — Thom Mann believes Catholics in the Detroit metro area have always wanted to see Detroit’s beautiful, historic inner-city churches filled again — many have even wanted to visit themselves — but just needed “a little push” to do so.

But what started as a little push has turned into a tidal wave for the once-fledgling “Mass mob” movement, which began in early spring and has blossomed into a resounding “Amen” as pews have become packed with every successive outing.

The latest, on Aug. 10, saw more than 2,000 people attend Mass at a historic Polish church that hasn’t heard that many “Peace be with yous” in at least three decades. The site was St. Albertus Church, which closed as an active parish in 1990 but continues to operate as a center for Polish heritage in the city.

“At first we thought having them once a month would be too many — how would we fill them up? But now, we’re overflowing,” said Mann, who with three others is organizing the Mass mobs, five of which have been held so far.

Since the first one April 6 brought 150 people to St. Hyacinth Church on the near-east side, congregations have grown “exponentially,” Mann said, drawing 400 to St. Charles Borromeo, 900 to St. Joseph, 1,800 to Sweetest Heart of Mary and now more than 2,000 to St. Albertus, with congregants spilling out the doors.

(Read about the Mass mob experience in a Philadelphia parish church last spring.)

Anthony Battaglia, another of the organizers, said the turnout has been “beyond my wildest expectations.” Battaglia, who works with the social media team at DTE Energy, said he first learned about the idea for the Mass mobs in Detroit’s archdiocesan newspaper, and decided to get involved.

“I was reading an editorial in The Michigan Catholic, I believe in April, and the editorialist was writing about the Buffalo Mass mob project, and basically said, ‘We could have one of these in Detroit, and all we would need is someone to organize that,'” Battaglia said. “And reading the story, I thought, ‘I have background in social media. Why not be the organizer?'”

It was soon afterward that Battaglia learned of other efforts to start up a movement aimed at helping Detroit’s aesthetically breathtaking, but now mostly empty, Catholic churches regain some of their lost vigor. Joining efforts with Mann, AnnaMarie Barnes and Jeff Stawasz, he took to social media to promote it.

Battaglia said the draw for visitors is obvious.

In addition to social media, Mann credits the massive amount of traditional media attention with giving the Mass mobs the initial boost they needed.

But he said despite the fact that parishes can desperately use the increased collections — Sweetest Heart of Mary’s Mass mob raised $23,000, or 11 times its usual Sunday total — “the goal isn’t just to have everybody show up one Sunday for church.”

“It’s to bring people back to their faith, and I’ve seen that happen,” Mann said. “The church I attend regularly, St. Charles Borromeo, we have had an increase in attendance (since the Mass mob). It hasn’t been 400 every Sunday, which I would love to see, but we usually get about 100, and last Sunday we had about 150 people there.”

St. Albertus Church, while not an active parish, hosts Mass several times a year with permission from the Archdiocese of Detroit, which sold it to the Polish American Historic Site Association in 1991. The association raises money to maintain the 129-year-old church, including its awe-inducing historic stained-glass windows and painted murals.

Father Eduardo Montemayor, a priest of the Society of Our Lady of the Most Holy Trinity, celebrated the Aug. 10 Mass. He told the congregation it was great to see the Holy Spirit at work among organizers and participants.

“Jesus has faith that we can transform Detroit,” he said. “That we can rebuild the (Catholic) Church in Detroit.”

Mann said reaction from Massgoers has ranged from excited to appreciative, and said he expects interest to continue to build.

“I’ve attended about 15 of the historic churches in Detroit, and when you go and see 25 people there in an absolutely beautiful church, I just felt that, ‘Boy, something needs to be done,'” Mann said. “And this Mass mob movement has been just what everybody wanted.”

NEXT: St. Louis archbishop urges prayers for peace to calm chaos in streets