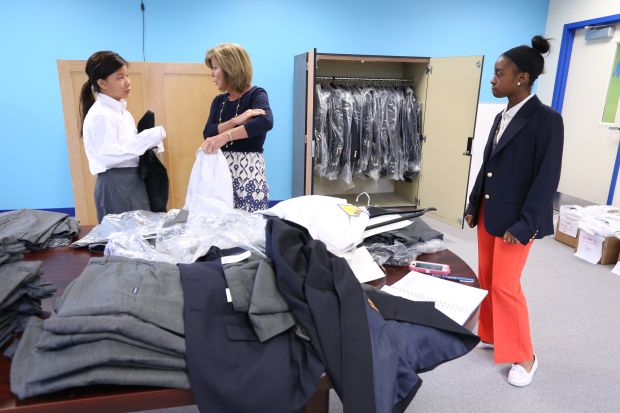 After nearly a year and a half of planning to start the school, some students arrived before the doors even opened Aug. 4.

“It’s alive. It’s a real change,” said the principal, Jesuit Father Jim Van Dyke. “It is wonderful to have the building filled with students.”

Bethy Ramirez was among the students.

“It was exciting getting exposure to how the schedule is going to work,” she said about the first day.

She said they learned some of the skills they would need in the workplace, including communicating and making good first impressions.

Ramirez attends St. Patrick Church, in Norcross, but lives in Lawrenceville. Her daily commute to the school involves riding in a car and taking public transportation with a fellow student. She told The Georgia Bulletin, Atlanta’s archdiocesan newspaper, that her favorite part of being at the school is likely to be the workplace component because law firms are participating, and she hopes to be a criminal attorney one day.

“I was really excited to hear they were going to do that,” said Ramirez, who would have attended public high school if not for the opening of Cristo Rey.

Cristo Rey Atlanta is the 28th high school in a nationwide network of Cristo Rey schools. They offer a unique educational program. Students, who can be of any faith, must come from economically disadvantaged backgrounds.

The schools offer a rigorous college preparatory curriculum. And the students work in a corporate office for about 45 days a year. The companies pay the school for the student’s work, which covers a large share of the school tuition.

Also students will be in school longer — 195 days, which is about two weeks longer than a typical school year. The school day also lasts longer, starting at 7:30 in the morning and ending at 4:30 in the afternoon. In the middle of July, students attended mandatory summer academic enrichment. The mission is to prepare students to go on to college and beyond.

Sean McNeal wakes up at 5:30 in the morning at his Peachtree City home to start his journey to school on public transportation. It’ll be another 12 hours before he gets home. For him, learning is not just what is in the books, but also about the cultures of other students. About half the school is African-American, like McNeal, and the other half is Latino.

“It’s been good, but I think it’s going to get harder. I think I am prepared for it,” said the 14-year-old.

Before their classwork begins, students were spending two weeks focused on what is called the Business Training Institute, learning keyboarding, business communications and other skills.

Donors, from corporations and other private schools to the Knights of Columbus and individuals, contributed to make Cristo Rey Atlanta possible. Some donated buses, while others gave furniture and others are student mentors.

“This is a real indication of a need. The Catholic commitment to the common good is really fulfilling. The high school is awesome, along with our staff and our faculty,” said Bob Fitzgerald, chairman of the board of directors.

An office building that housed the administrative offices of the Archdiocese of Atlanta for many years was converted to a 39,000-square-foot school with 16 classrooms. There are eight teachers.

Deacon Bill Garrett, the president of the school, joined the effort to open the school in the winter of 2013.

“In some ways, it’s a miracle. We had $7,800 in the bank. We didn’t have a location nailed down. This was a construction zone for longer than we expected. We were asking families to make a leap of faith,” he said.

And they did. Nearly 90 percent of students accepted an invitation to attend and be the pioneering class. School leaders had anticipated only around 70 percent would accept.

Deacon Garrett said more families embraced the school’s mission than expected, so nearly 40 additional students are there. Parents were impressed to have the school linked with well-known corporate names, such as the Coca-Cola Co., UPS and Delta, he said. Also, parents may have been pushed to give the school a chance by the challenges facing their local public schools, he said. There are charter schools for children in primary grades — as an alternative to public schools — but not many alternatives exist for high school, he said.

Father Van Dyke joked with students who just finished an exam. He was about to celebrate Mass for two dozen students and staff.

“You were brilliant? Say yes,” he said. “I want brilliance.”

As the midday Mass began, he prayed, “We ask God to bless who we are so we can be great.”

Later, the veteran high school educator talked about how he encouraged students and their families to remember their choice to go down a different path than their children’s peers.

The college prep courses may be harder than some parents accomplished in their own education, as the students learn Latin and work in corporate offices, he said. The parents must encourage their kids when the students feel challenged, he said.

Attending Cristo Rey was “a good choice,” he said. “Stick with it.”

NEXT: Healing after teen’s shooting ‘in Jesus’ hands,’ says parishioner