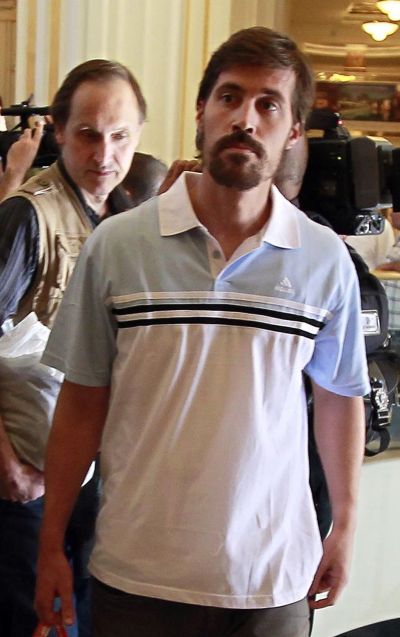 In an Aug. 22 interview on NBC’s “Today” show, John and Diane Foley briefly described the previous day’s discussion with the pope, in which they spoke of shared grief at the death of loved ones.

“Pope Francis was so dear because he is grieving himself, having just lost three members of his family and (with) his nephew critically ill,” Diane Foley said on the program. “Here in the midst of his tremendous grief, he took the time to call. Our whole family was there, one of our beloved priest friends … was there, my brother-in-law spoke in Spanish to him. He was just so kind.”

The wife and two young children of the pope’s nephew, 35-year-old Emanuel Horacio Bergoglio, were killed in a car crash Aug. 19 in Argentina. Bergoglio was critically injured.

John Foley said on the “Today” show that “we felt very comforted and supported” that the pope offered his personal prayer.

Father Paul Gousse, pastor of the family’s parish, Holy Rosary Church in Rochester, New Hampshire, told Catholic News Service in an Aug. 22 phone call that the Foleys told him they were especially struck by the pope’s outreach to them at a time when he is grieving himself. He said the pope spoke with several members of the family in a call that lasted more than 20 minutes.

Shortly after the call was made, Jesuit Father Federico Lombardi, Vatican spokesman, told the Vatican press that Pope Francis called to console the family for their loss and assure them of his prayers.

Passionist Father Ciro Benedettini, assistant director of the Vatican press office, told reporters the next day that the pope’s call came shortly after 2 p.m. New Hampshire time, and that the conversation was “long and intense.”

Pope Francis was particularly “struck by the faith” of the late journalist’s mother, the spokesman said. The pope spoke with the parents through an interpreter.

According to The Associated Press, U.S. officials confirmed a graphic video released Aug. 19 that showed Islamic State fighters beheading Foley, a 1996 graduate of Marquette University who had been a freelance journalist for the past several years, mostly in the world’s trouble spots. In 2011, he was kidnapped on a Libyan battlefield and held captive in Tripoli for 45 days.

Sometime in late 2012, he went missing in Syria. The last time his family heard from him was before Thanksgiving that year.

The Islamic State militants said they killed Foley in retaliation for U.S. airstrikes on their strongholds, and the group threatened to kill another U.S. hostage also shown in the video.

President Obama called Foley’s parents Aug. 20 before addressing the nation about their son’s death and told them: “We are all heartbroken.”

When Obama was making his televised remarks about James Foley’s death, his parents spoke to reporters on the front yard of their home.

“We thank God for the gift of Jim. We are so, so proud of him,” said Diane Foley.

She added that he was “a courageous, fearless journalist — the best of America.”

John Foley told reporters: “We think his strength came from God,” and his wife interjected: “We know it did.”

His father also described how their son not only wanted to humanize the wars he was covering but would also “take a bullet” for any of his colleagues.

“It’s not difficult to find solace,” his father added, saying he knows his son is “in God’s hands.”

He said it is now up to others to “pick up the gauntlet” and continue the work his son was doing.