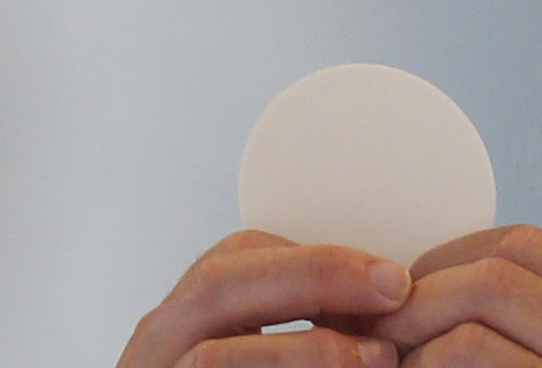 OKLAHOMA CITY (CNS) — A stolen consecrated host that was at the center of a lawsuit filed by Archbishop Paul S. Coakley and intended for use at a planned Satanic “black mass” in Oklahoma City has been returned.

According to the Archdiocese of Oklahoma City, an attorney representing the head of the satanic group presented the host to a Catholic priest the afternoon of Aug. 21.

With the return of the host and an accompanying signed statement from the satanic group leader that the group no longer possesses a consecrated host, nor will they use a consecrated host in their rituals, the Oklahoma City archbishop agreed to dismiss the lawsuit.

Archbishop Coakley filed suit Aug. 20 to get the host returned after the Satanic group’s leader made several public statements that its members planned “to defile and desecrate” it during a “black mass” Sept. 21 at the Civic Center Music Hall in Oklahoma City.

“I am relieved that we have been able to secure the return of the sacred host, and that we have prevented its desecration as part of a planned Satanic ritual,” the archbishop said in a statement. “I remain concerned about the dark powers that this Satanic worship invites into our community and the spiritual danger that this poses to all who are involved in it, directly or indirectly.”

In early August, Archbishop Coakley asked Catholics to offer prayer and penance to prevent the Satanic group Dakhma of Angra Mainyu from holding a “black mass.”

“Even though tickets are being sold for this event as if it were merely some sort of dark entertainment, this Satanic ritual is deadly serious. It is a blasphemous and obscene inversion of the Catholic Mass,” he said.

The lawsuit named Adam Daniel, the head of Dakhma of Angra Mainyu, and the Satanic group itself as plaintiffs.

Daniel told news outlets he had received the host by mail from a priest in Turkey. Rituals during a “black mass” include having attendees throw Communion wafers on the floor and stomp on them. In addition a Satanic “nun” urinates in a chamber pot.

Daniel said his group should be able to practice its religion freely. He considers Catholic dogma “enslavement.”

“All I’m trying to do is free people’s minds and allow them to live as they want,” he was quoted as saying.

In his Aug. 4 letter to priests and parishioners, Archbishop Coakley called for a united campaign of prayer, procession and benediction in response to the “black mass.” He specifically asked that the prayer to St. Michael the Archangel be included at the conclusion of every Mass, from the feast of the Transfiguration of the Lord, which was Aug. 6, and continue through the feast of the Archangels, Sept. 29.

“I invite all Catholics to pray daily for divine protection through the intercession of this heavenly patron who once defeated Lucifer in his rebellion against the Almighty and who stands ready to assist us in this hour of need,” he said in the letter.

He also encouraged parishioners to write to Oklahoma City Mayor Mick Cornett “to express your outrage over this offensive and blasphemous sacrilege and this misuse of a tax-supported public space.”

Archbishop Coakley said he would lead a Holy Hour, an outdoor eucharistic procession and Benediction the afternoon of Sept. 21 at St. Francis of Assisi Church in Oklahoma City.

On “the day of the proposed sacrilege,” he said, “we will pray to avert this sacrilege and publicly manifest our faith in the Lord and our loving gratitude for the gift of the holy Eucharist, the source and summit of our lives.”

Archbishop Coakley has said that despite “repeated requests” and telling city officials how offense the “black mass” will be to Oklahoma’s more than 250,000 Catholics, there was no indication “the city intends to prevent this event from taking place.”

City officials said the event is protected by the First Amendment and there were no plans to cancel it.

NEXT: New HHS rules for opting out of mandate miss the point, USCCB says