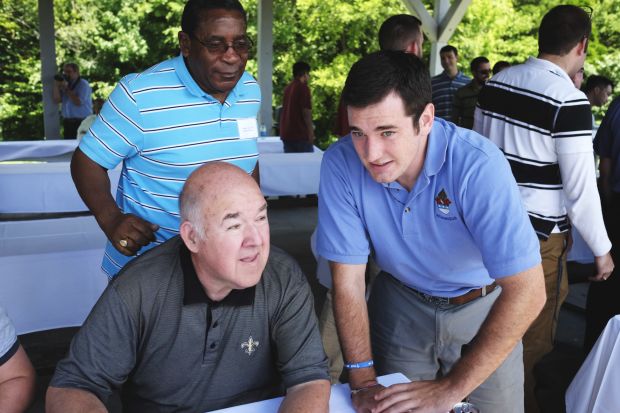 BARREN RIVER STATE PARK, Ky. (CNS) — About 120 men, nearly all of the seminarians for the seven dioceses that make up the province of Louisville, met for a first-of-its-kind gathering Aug. 11-13 at Barren River State Park in Kentucky.

The gathering was the brainchild of Bishop David R. Choby, who has seen a tremendous growth in vocations during his time as the bishop of Nashville, Tennessee. After ordaining nine men to the priesthood earlier this summer, the diocese currently has 28 men in seminaries and anticipates that as many as six to be ordained to the priesthood next summer.

“Because so often as seminarians encounter the contemporary opportunities for them to experience a secular point of view of life it raises a question about the value or importance of something like the priesthood,” he said. “For 120 men to be together in one time, one place, praying together, eating together, talking together, I just felt like it would be a source of mutual support, and that’s important.”

The seminarians met as a group for meals, Mass, and a few talks. Individual dioceses held meetings with their seminarians, and the gathering included free time for recreational activities at the lakeside state park in south-central Kentucky.

“There is great merit that we’ve experienced for years and years of the bishops coming together in a province and then once a year the priests who are in the priest councils of the various seven dioceses also come together,” said Archbishop Joseph E. Kurtz of Louisville, Kentucky.

The archbishop is metropolitan of the ecclesiastical province, which includes across the four dioceses in Kentucky — Louisville, Covington, Lexington and Owensboro — and the three in Tennessee — Nashville, Knoxville and Memphis.

“It has been a source of mutual fraternity, of union with Christ and a sense of communion and then of support of one another as we do the work of Christ within the dioceses. It keeps us from seeing the diocese as a silo unto itself and makes us be aware that the particular church has an obligation to the universal church and we begin that obligation by helping our neighbors and that’s what the province gathering is.”

The gathering reflects the strength of vocations across the dioceses in the province.

“What a great gift just to see them all in one room for Mass, for meetings, and for the meals,” Archbishop Kurtz said. “It’s a chance for them to come to not only know each other within their own diocese but to know each other within the province and I think it builds a spirit of fraternity, an esprit de corps so to speak so that we are working together. I can already sense it going on right now.”

“Couldn’t you also see the expression of the universal church with men who are coming to serve all of the pastoral needs here from Latin American countries, from Africa, from Vietnam and Asia?” Archbishop Kurtz said. “It is that great sense of universality of the church serving Christ.”

Musacchio is editor in chief of the Tennessee Register, newspaper of the Nashville Diocese.

PREVIOUS: Ryan’s proposal opens the door for a nationwide discussion on poverty

NEXT: Special U.S. collection urged to help those suffering in Middle East