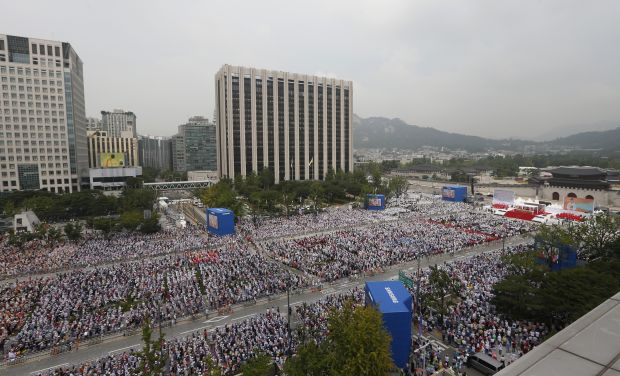 SEOUL, South Korea (CNS) — Pope Francis placed 124 Korean martyrs on the last step toward sainthood in a beatification Mass Aug. 16 that brought elation to the 800,000 people in attendance.

The sun was searing as Bishop Francis Ahn Myong-ok of Masan, president of the commission for the beatification, asked the pope to pronounce the martyrs blessed. After hearing a brief collective biography of 124 of the original founders of the Korean Catholic Church, Pope Francis pronounced the formula of beatification.

With his words, trumpets blared and a huge swath depicting a watercolor of the newly blessed martyrs in heaven was unfurled on the side of a large building facing the square where the faithful gathered. People laughed and cheered as the image also popped up on the giant video monitors along the more than one-mile stretch.

“It was very great to see Papa Francis,” Sophia Moon, 26, told Catholic News Service. “He was very touching to us because in Korea there have been very hard times and there were (people who became martyrs).”

The 124 were killed for their beliefs, setting off a 100-year period in the 18th and 19th centuries when the Korean government went after about 10,000 faithful who pledged filial piety to God, not the king of Joseon. Among this group was Paul Yun Ji-Chung, the very first Korean to be executed for his faith after he buried his mother using Catholic rites that completely went against the norms of the heavily Confucian society.

In his homily, the pope said, “So often we today can find our faith challenged by the world, and in countless ways we are asked to compromise our faith, to water down the radical demands of the Gospel and to conform to the spirit of this age.”

“Yet the martyrs call out to us to put Christ first and to see all else in this world in relation to him and his eternal kingdom. They challenge us to think about what, if anything, we ourselves would be willing to die for,” he said.

Seyeon Jeong, 26, told Catholic News Service she had an 18th-century ancestor who “actually sacrificed himself as a Catholic” but was not among the newly blessed. 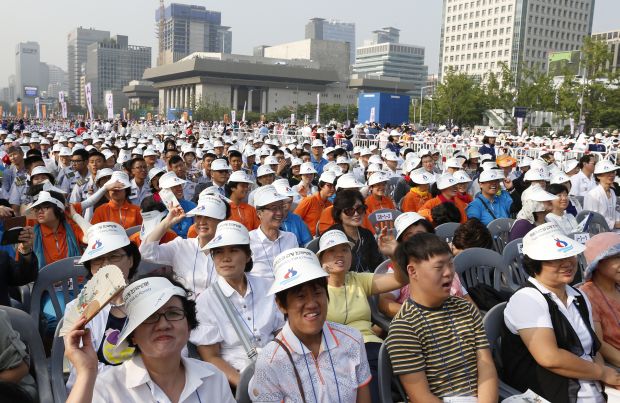 People with disabilities wait in Seoul, South Korea, for the start of Pope Francis’ celebration of the beatification Mass of Paul Yun Ji-chung and 123 martyred companions Aug. 16. (CNS photo/Paul Haring)

“I was born a Catholic and I have been living as a Catholic, but through this Mass I can actually realize the meaning, I mean the full meaning of what the sacrifice meant here,” she said. “I could actually feel my ancestor’s spirit.”

Pope Francis credited the martyrs with showing the “importance of charity in the life of faith,” since their belief in the “equal dignity of all the baptized” led them to challenge the “rigid social structures of their day.”

Moments before the Mass, the pope personally greeted the faithful as he traveled via popemobile along the stretch from Seoul’s City Hall to Geongbok Palace, the backdrop of a temporary altar. Geongbok is described by South Korea’s tourism bureau as the grandest of the Joseon-era palaces.

Among those who attended the Mass were about 300 U.S. military personnel and 400 family members of the victims of the Sewol ferry accident, which left more than 300 dead in April.

The Sewol group had been protesting at the square for weeks, demanding that a special law be passed for an independent investigation into the accident. They were determined to remain during the beatification Mass in hopes of an encounter with the pope. After days of negotiations, the committee handling the pope’s visit granted access, and they got their wish.

When Pope Francis swung by on the popemobile, many called out to him, pointing at the family members and one grieving father who had been on a hunger strike for more than a month.

Kim Young-oh, father of a teenage girl who died in the capsized ferry, told CNS the pope grabbed his hands and, because a fence separated them and he could not hug the pope, he laid his forehead twice on the pope’s hands.

Kim said he asked to give him a letter and the pope nodded and tucked it into his cassock.

“I was really prepared to meet the pope and (spell) out that there is a strong need for this bill, and we’re really fighting for this bill,” said Kim through an interpreter. “And after this long time on this (hunger) strike I kind of succeeded (by) meeting the point person. I saw real hope.”

NEXT: Pope tells Asians to witness to Christ in all aspects of life