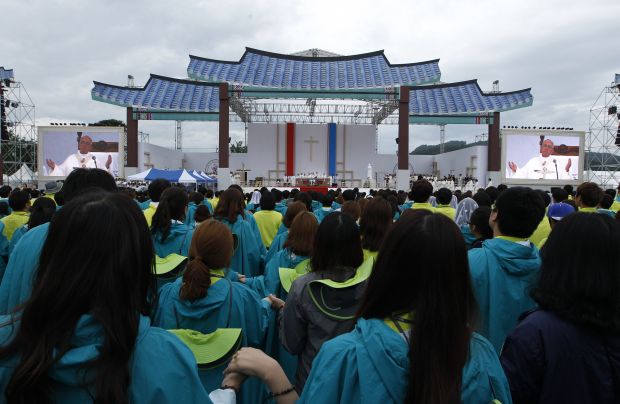 SEOSAN, South Korea (CNS) — Pope Francis told young Asian Catholic leaders to witness to Christ in everything they do.

During his homily on the muddy grounds of Haemi Fortress, Pope Francis urged more than 40,000 people — including young Catholic leaders from 22 Asian countries — to “reflect God’s love.” He reminded them it was their “right and duty to take part in the life of (their) societies.”

“Do not be afraid to bring the wisdom of faith to every aspect of social life,” the pontiff said. He also urged them to discern “what is incompatible with your Catholic faith … and what aspects of contemporary culture are sinful, corrupt and lead to death.”

Young people are always choosing their social lives over other things, and this makes it complicated to “grow up in their faith also,” said Montira Hokjareon, a youth coordinator in Thailand’s Udon Thani Diocese. She said it was especially hard for young Thai Catholics to practice their faith in a predominantly Buddhist country where less than half of 1 percent of the population is Catholic.

Hokjaroen, 34, was one of 20 participants who had lunch with Pope Francis Aug. 15. She told Catholic News Service it was good he nudged the youth leaders to evangelize, “because I think the people will learn (about) Jesus through us.”

Rain threatened the Aug. 17 closing Mass for Asian Youth Day, which, unlike the massive international World Youth Day events, focuses more on youth leaders. At one point, the wind whipped off the pope’s cap.

Pope Francis emphasized the theme of this year’s gathering, “Asian Youth Wake Up, the Glory of the Martyrs Shines on You.”

Haemi Fortress was where thousands of Catholics were killed during a 100-year period in the 18th and 19th centuries. In the 1700s laypeople formed the church based on Catholic writings that they got ahold of from China. The original founders pledged loyalty to God rather than the Korean king, which was socially unacceptable. The government pursued them for carrying out Catholic rites and baptisms, killing 10,000 faithful in the century beginning in 1791. 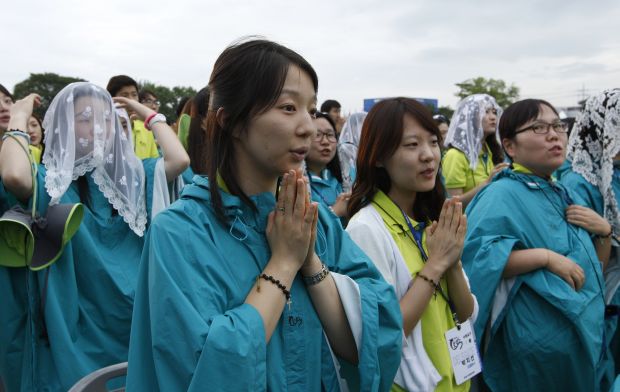 A day before the closing Mass, Pope Francis beatified 124 of the founders of the Korean Catholic Church, moving them a step closer to sainthood.

Michael Hwang of Seoul said being on these grounds was “exhausting emotionally,” because his ancestors were among those executed. But he told CNS he was glad to be a part of Asian Youth Day because it brought him closer to other Catholics from Asia.

“(The pope) said to wake up and a lot of people can come together, and we could be like one nation,” said Hwang, a 17-year old high school student.

Hwang said his friends are not Catholic, “but I think Catholicism is a great thing and I can tell to my friends about how (being) Catholic is great, and this event will be a great background to teach or tell other people.”

Stephen Borja of Manila, Philippines, told CNS the founding of the church in Korea “is such a unique story, and it really touched me. How passionate they were about receiving the faith, standing up for it, even giving up their lives for it.”

Borja, 34, works with the youth commission of the Catholic Bishops’ Conference of the Philippines. He said the pope’s words inspired him to show his faith to others, which is still a challenge in his predominantly Catholic country.

The three characteristics the pope identified for the church in Asia are “holier, more missionary and humbler,” he said. “Those are words I would carry with me and also with my work in the church.”

Pope Francis celebrated Mass at an altar made up of 16 wooden crosses that locked together like wooden blocks and were decorated by the youth. Readings and intercessions were in Filipino, Indonesian, Korean and other languages.

He told young Asian to build “a church which loves and worships God by seeking to serve the poor, the lonely, the infirm and the marginalized.”

Bishop Peter Kang U-il of Jeju, president of the Catholic Bishops’ Conference of Korea, noted that this was the first Asian Youth Day attended by a pope.

“The young Asians may have experienced an extraordinary moment of grace, and they also may have acquired the seed of courage and hope for their future, because Your Holiness shared a great affection and intimacy with them,” he told Pope Francis at the Mass.

NEXT: Pope calls on Catholics to dialogue with China, other Asian societies