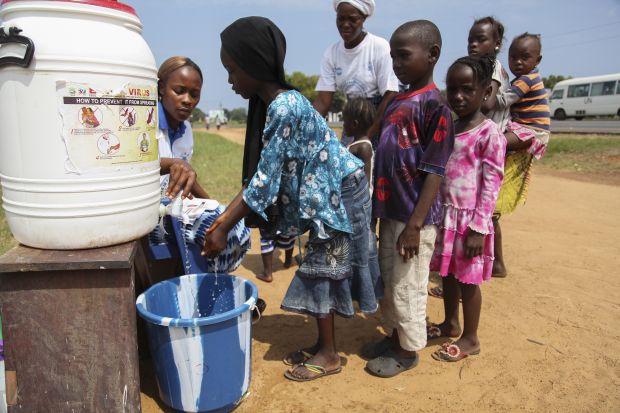 Liberian children are encouraged to wash their hands as part of an Ebola sensitization program in Monrovia, Liberia, Aug. 5. (CNS photo/Ahmed Jallanzo, EPA)

ACCRA, Ghana (CNS) — As the World Health Organization declared an international public health emergency in West Africa, Ghana’s bishops urged their government to be extra vigilant in screening people who enter the country by sea.

To avoid Ebola spreading from other West African countries to Ghana, officials at all entry points “should be alert and well-equipped to screen people” so they can “isolate and deal with possible cases,” the Ghana Catholic Bishops’ Conference said in an Aug. 7 statement signed by its president, Bishop Joseph Osei-Bonsu of Konongo-Mampong.

The death toll from the Ebola outbreak in Guinea, Liberia and Sierra Leone neared 1,000, the World Health Organization said Aug. 8. Among those being treated for the disease was a 75-year-old Spanish priest, evacuated from Liberia to Madrid.

Symptoms of the disease, which has no known cure, include vomiting, diarrhea and internal and external bleeding. The fatality rate of the current outbreak is around 60 percent.

Ghana’s bishops said they were particularly concerned about fishermen who have been to affected countries, return to Ghana through its harbors and go “straight to their families and communities without any proper screening.”

This “poses a real danger not only to the families of such people but to the entire nation, and we call on (the) government to help address this situation,” the bishops said.

They urged the government to set up centers in hospitals and clinics around the country that are equipped to manage cases of Ebola, as well as to provide protective gear to staff in these centers.

“Additionally, we think that some compensatory package should be instituted for those who attend to Ebola patients to encourage and motivate them to offer the best possible care to such patients,” they said.

Noting that a nationwide information and education campaign is urgently needed, the bishops appealed to all priests, religious and other church leaders to distribute information on prevention, transmission and treatment of the disease. Church officials in other West African countries were carrying out similar education campaigns.

“Health personnel should be approached to lead this exercise” in churches, they said.

The bishops also warned against panic.

“While it is absolutely important for everyone to help prevent this deadly disease from entering our country, it serves no useful purpose to suspect every little symptom as signs of Ebola. This, far from helping in the fight against the disease, rather creates confusion, fear and panic,” they said.