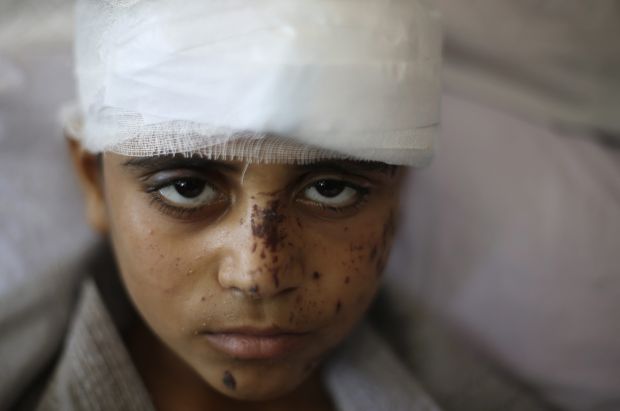 Mahmoud al-Ghol, 10, lies in bed at the European Hospital in Gaza Aug. 5. The boy was pulled from beneath the rubble of a house, which witnesses said was destroyed in an Israeli air strike that killed nine members of his family. (CNS photo/Ibraheem Abu Mustafa, Reuters)

AMMAN, Jordan (CNS) — The head Caritas in Jerusalem expressed grave concern for the Gaza Strip’s residents with fighting once again erupting between Israel and Hamas.

Father Raed Abusahlia, president of Caritas Jerusalem, said the physical damage caused by the intensive aerial bombardments of Gaza’s decrepit infrastructure will require years of rebuilding, but he said the spiritual and emotional impact of the death and destruction will take much longer to heal.

“I am very angry and surprised that they renewed the fighting. One month was more than enough. We hope it will end,” Father Abusahlia told Catholic News Service in a phone interview from Jerusalem Aug. 8. He said humanitarian organizations were only just beginning to reach people desperately in need of aid, water, food and shelter during the 72-hour cease-fire in early August.

“Even if the war stops, it didn’t end … what was destroyed and damaged in one month needs years to be reconstructed,” he said.

“It’s not just material reconstruction of houses, water, electricity, and sewage but the psychological and moral condition of the people there. You need to find housing for 10,000 families who completely lost their homes and are living in schools. What do you do with these people?” he asked.

“About 10,000 people have been injured and 80 percent of those are civilians. Perhaps one-third paralyzed and disabled. Healing the wounds of the last month will take years,” the priest said.

Father Abusahlia warned that renewed conflict will only compound an already desperate situation into something unimaginable.

“If they renew the fighting, the result in all directions will increase causalities and injuries. The situation was very bad. It will only become worse,” he added.

Israel resumed strikes on targets in Gaza in response to rocket fire from the area shortly after the cease-fire between Israel and the militant group Hamas expired Aug. 8. 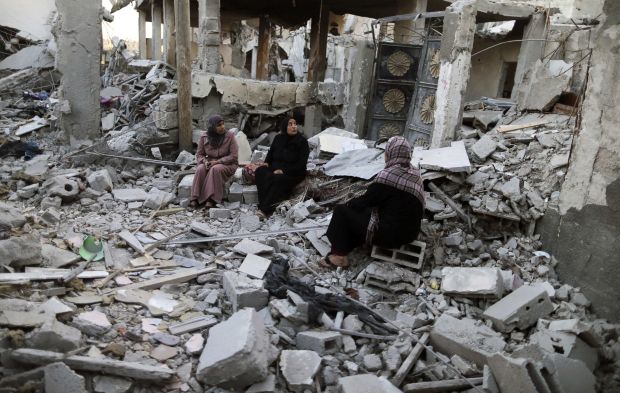 Palestinians sit outside their destroyed house in Gaza, which witnesses said was hit by heavy Israeli shelling and air strikes during an offensive Aug. 7. (CNS photo/Mohammed Salem, Reuters)

Father Abusahlia said that, during the truce, Caritas began to distribute blankets and food for 1,000 families in the Rafah area severely damaged in the bombardments as Israel was rooting out tunnels Hamas dug to carry out attacks on Israel.

“Our clinic in Shijaiyah camp received more than 100 cases referred to us from the U.N. schools,” he said. Many Palestinians were forced to flee U.N. schools due to heavy Israeli artillery fire, shelling and bombardments.

“There are many diseases now among young children and women, especially liver and stomach problems because of no clean water or food,” he added.

He said Argentine Father Jorge Hernandez of the Institute of the Incarnate Word, who works at the lone Catholic parish in the Gaza Strip, assisted Caritas staff in the aid distribution in Rafah.

The priest and three Missionaries of Charity who live at the parish had nowhere to evacuate the 29 severely disabled children and nine elderly women in their care and so remained at the church in the midst of the heaviest bombing campaigns.

“There is deterioration of the situation on the ground and of our efforts to aid the people of Gaza. Their situation becomes more complicated,” Father Abusahlia said of the renewed fighting.

He said Palestinians have paid a very heavy price with tremendous losses, but no positive accomplishments toward seeing their desires to have the closure of Gaza lifted, crossings with Israel opened or the end of occupation resulting from this latest war.

Now, he said, getting humanitarian assistance to those in dire circumstances will become even harder.

“We are trying our best but we don’t know what will take place. We are not sure if can continue in the present circumstances,” he said.