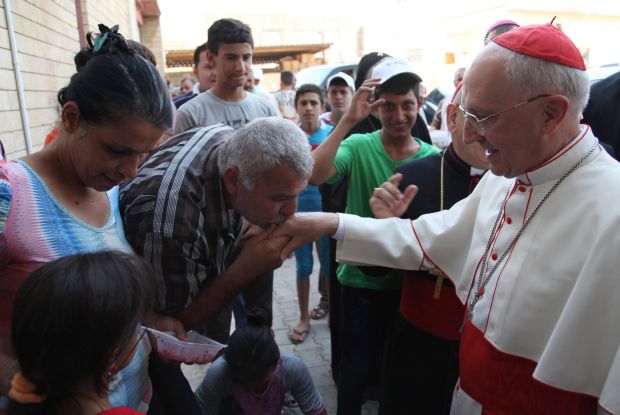 A man kisses the ring of Cardinal Fernando Filoni during an Aug. 13 visit to Irbil, Iraq. (CNS photo/Azad Lashkari, Reuters)

VATICAN CITY (CNS) — Cardinal Fernando Filoni said Pope Francis “was really taken” by the cardinal’s description of Christians and other minorities forced from their homes in northwestern Iraq by militias belonging to the Islamic State terrorist group.

The pope met Cardinal Filoni early Aug. 21, the morning after the cardinal returned to the Vatican following an Aug. 13-20 visit to Iraq as the pope’s envoy to besieged minorities there.

“He was very attentive,” the cardinal said of the pope, “and he let me speak at length. He took to heart all the situations I spoke about: the expectations of our Christians and their worries, as well as the approach taken by the local churches.”

Cardinal Filoni, a former Vatican nuncio to Iraq and current prefect of the Congregation for the Evangelization of Peoples, spoke to Vatican Radio after his meeting with Pope Francis.

The cardinal was able to meet with the displaced on the lawns of churches, inside church buildings and schools, and in the camps where they have received initial assistance. He said: “You have to realize that this is the warmest period of the year,” when temperatures regularly exceed 110 degrees Fahrenheit, so shade and water are extremely important.

Once the immediate needs are met, he said, “everyone asks: How long will this go on? What awaits them?”

“The most vivid images that will stay with me are of those people who have lost everything” yet count themselves lucky if no one in their immediate family was killed by the Islamic State forces, he said.

Most of the members of the minority Yezidi religious community were not so fortunate, he said. “This was agonizing. Their faces were blank.” They had seen many of the men in their villages murdered and many of the women “kidnapped, raped and sold.”

Cardinal Filoni told Vatican Radio his hope “is the hope of these people” — that they can return home with some form of internationally guaranteed “security cordon” around their villages.