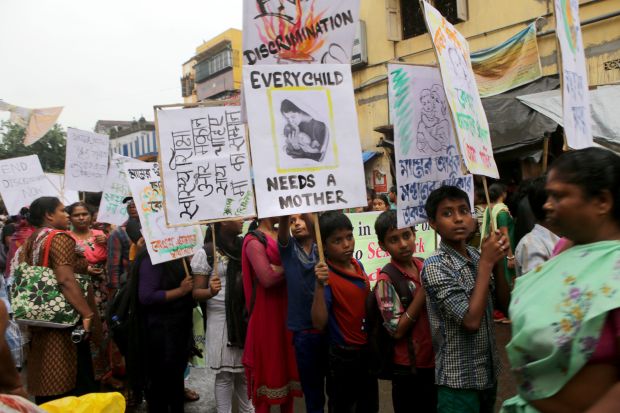 Sex workers and their children take part in an Aug. 14 demonstration seeking better rights and a halt to girl trafficking in the red-light area of Kolkata, India. (CNS photo/Pial Adhikary, EPA)

VATICAN CITY (CNS) — Human trafficking destroys the lives of millions of children, women and men each year, making it a real threat to peace, the Vatican said as it announced Pope Francis’ 2015 World Peace Day message would focus on the phenomenon.

“Slaves no more, but brothers and sisters” will be the theme for the Jan. 1, 2015, commemoration and for the message Pope Francis will write for the occasion, according to the Pontifical Council for Justice and Peace.

Pope Francis has called human trafficking “a crime against humanity” and “an open wound on the body of contemporary society, a scourge upon the body of Christ.”

In describing why Pope Francis chose trafficking as the theme for World Peace Day 2015, a statement from the Pontifical Council for Justice and Peace said, “Many people think that slavery is a thing of the past,” but “this social plague remains all too real in today’s world” with child labor, forced prostitution, trafficking for organs and a variety of forms of forced labor.

Trafficking, which generates huge amounts of income for organized crime, threatens peace because it is based on a lack of recognition of the fundamental human dignity of its victims, the Vatican statement said.

“Fraternity requires us to reject any inequality which would allow one person to enslave another,” the statement said. “Our purpose is to build a civilization based on the equal dignity of every person without discrimination.”

The pope’s full message for World Peace Day traditionally is released by the Vatican in mid-December and is sent, through Vatican diplomats, to the leaders of nations around the world.

As archbishop of Buenos Aires, the pope celebrated an annual Mass with the victims of trafficking, and soon after his election as pope in 2013, he asked the pontifical academies of sciences and of social sciences to study the problem of modern-day slavery and ways for the church to work with others to stop it.

In March, the Vatican, the Anglican Communion and others launched the Global Freedom Network. The initiative, based at the Pontifical Academy of Sciences, aims to prevent modern forms of slavery; to protect, rescue and rehabilitate victims; and to promote concrete measures that condemn or criminalize human trafficking.

NEXT: Cardinal tells pope about the hopes and trials of the displaced in Iraq