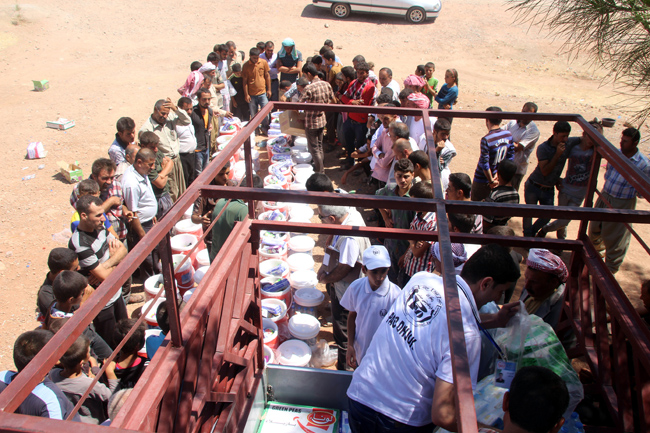 Members of the Yezidi religious minority who fled from violence in Mosul, Iraq, receive aid Aug. 21 in Dohuk province, in the northern part of the country. The Franciscan custos of the Holy Land said that while tolerance between some groups seems to have disappeared, new signs of caring for and protecting one another can be seen in almost every community. (CNS photo/EPA)

VATICAN CITY (CNS) — Although Christians, Muslims and Jews have struggled for hundreds of years to live peacefully alongside each other in the Middle East, “we have never seen the kind of ‘religious cleansing’ we are witnessing today,” said the head of the region’s Franciscans.

“All religious communities must raise their voices against this abomination” being carried out, particularly in Iraq and Syria, by terrorists calling themselves the Islamic State, said Franciscan Father Pierbattista Pizzaballa, custos of the Holy Land.

Speaking in Rimini, Italy, Aug. 24 at an international meeting sponsored by the Communion and Liberation movement, Father Pizzaballa said political, economic and probably military intervention will be needed to protect the Christian and other minority communities of the Middle East.

However, he added, their survival ultimately will depend on the courage and willingness of the region’s inhabitants to love and protect one another.

“Political solutions must be sought urgently, but they won’t save Christianity in the Middle East,” he said. “Their presence will be saved by the little ones, by those who courageously step up and challenge death, selflessly loving their brothers and sisters.”

Father Pizzaballa, who is based in Jerusalem, said the entire Middle East is undergoing a profound transformation. “The kind of stability that for 40 years characterized relations or non-relations in these countries has ended definitively,” but what will take its place still is not clear.

“The Middle East is in flames,” Father Pizzaballa said. And while the tolerance between some groups seems to have disappeared, new signs of caring for and protecting one another can be seen in almost every community.

The Arab Spring movement that began in 2011 “gave rise to great enthusiasm,” particularly among the region’s youths looking for greater freedom and opportunity, he said. “But this process was in a certain way hijacked by religious movements and parties that transformed it into a power struggle between the different religious and social components of the Middle East, especially between Shiite and Sunni” Muslims.

The growing power of extremist Muslim groups, he said, threatens not only the Christian and Yezidi minorities, but also other Muslims who don’t think like they do.

The Franciscan said that throughout the region he has witnessed Christians and Muslims coming to each other’s rescue, sharing the little they have even in the most desperate situations. Such gestures, “present everywhere, constitute the secret and necessary power to move beyond and not stop in the darkness of the moment, in the power of Satan.”

While political, military and economic interventions must be considered, he said, evaluating everything only on those terms “has nothing to do with the Christian faith,” which is a commitment to follow Jesus whose triumph came from his sacrifice on the cross.

“Jesus became Lord of the world on the cross, not after the success of the multiplication of loaves,” Father Pizzaballa said. “Our actions must be accompanied by a profound and serene conviction that in order to bear fruit everything we do must be united to the action of Christ.”