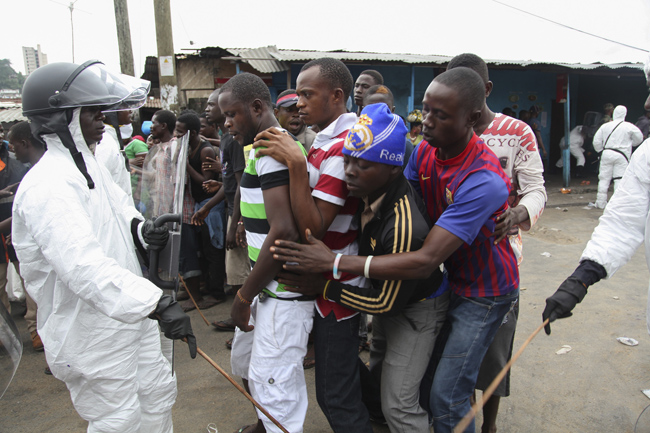 CAPE TOWN, South Africa (CNS) — Hunger and panic are spreading among people unable to work because of restrictions aimed at containing the spread of Ebola in Liberia and Sierra Leone, say church workers in West Africa.

In Liberia’s capital, Monrovia, church groups “are trying to get food and distribute it to families who have asked us to help, but movement is heavily restricted and there is little we can do,” Salesian Father Jorge Crisafulli, provincial superior in West Africa, said in an Aug. 22 telephone interview from Accra, Ghana.

Neighborhoods in Monrovia have been sealed off under terms of the government-imposed state of emergency.

The World Health Organization has estimated that more than 2,600 people in West Africa have been infected with Ebola since March. More than 1,400 people have died from the virus.

Food prices in Liberia are “rising steeply and people are hungry,” Father Crisafulli said, noting that “markets in the city that are usually bustling are now empty and no trading is happening.”

People are unable to get to work and, “while they still have to buy food, they have no money because they can’t work,” he said.

“There is great fear of spread of disease where there are large groups of people,” he said.

Liberia, Sierra Leone and Guinea are the countries mainly affected by the current Ebola outbreak.

“Particularly in Liberia, Ebola has become an economic and social problem as well as a health problem,” Father Crisafulli said, noting that “panic and fear are now greater problems than the disease itself.”

“Feelings of isolation are brought on by international fear of ‘Ebola countries’ and banning of flights,” he said, adding that “people feel like lepers of earlier centuries.”

Many people recover from Ebola and return to their families, and there are “stories of extraordinary courage” in the face of death, he said.

Hunger is also a major problem in Sierra Leone, said Father Peter Konteh, executive director of Caritas for the Archdiocese of Freetown, citing as an example a complex near his own home that has been quarantined.

Security guards were placed at the gate of the Freetown complex that is home to 54 people after the Aug. 6 death of an Ebola-infected doctor who lived there, he said.

While the guards ensure no one enters or leaves, there are stories that some have been bribed by residents “who said they were desperate to get out to buy food,” he said in an Aug. 25 telephone interview.

Places affected by Ebola are quarantined for 21 days, he said.

Father Konteh said he and other church workers were investigating ways to provide food to people in similar situations “to help prevent desperation.”

While Caritas’ European staffers have returned home, the local staff continue their work, he said, noting that “one of our finance clerks who has lost nine members of her family to Ebola still comes to work every day.”

Food prices have escalated, particularly since the border between Sierra Leone and Guinea was closed in June, Father Konteh said.

Many people in Sierra Leone buy their food with money earned the same day, mostly through informal trading, he said, noting that the closure of trading places has led to severe levels of hunger.

Salesians in Liberia are “also worrying about how to pay teachers’ salaries” after they had to shut their schools in line with the state of emergency, Father Crisafulli said.

“We still need to pay salaries, but we have no school fees to use for this,” he said, adding that “the education system here is already in crisis and now everyone has the added setback of losing an academic year.”

In Sierra Leone, the government has asked the Salesians to take responsibility for children who have been orphaned through Ebola, Father Crisafulli said, noting that the order “accepted this challenge” after making careful preparations to do so safely.

“We are planning our interventions in an organized manner, taking people’s long-term as well as immediate needs into consideration,” he said.

Recognizing that “prevention education can reduce levels of fear,” the Salesians have produced and distributed leaflets and billboards in Nigeria and Ghana as well as Sierra Leone and Liberia, he said.

Ebola is spread among humans through direct contact with infected bodily fluids.