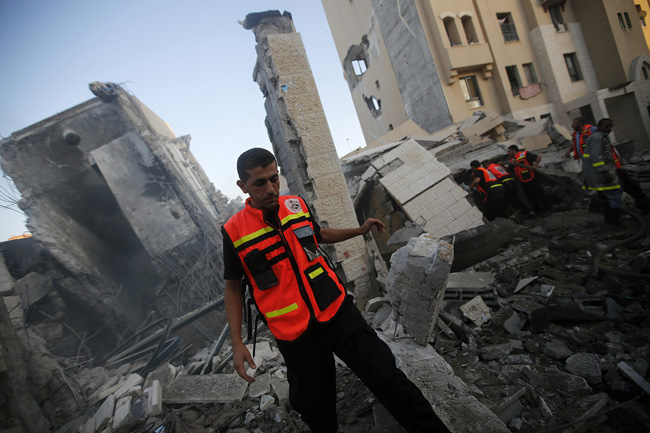 JERUSALEM (CNS) — Catholic aid organizations are hopeful that the most recent cease-fire between Israel and Hamas will hold as they begin to assess the needs in Gaza after 50 days of war.

“This is a window of opportunity,” said Sami El-Yousef, Catholic Near East Welfare Association’s regional director for Israel and the Palestinian territories. “(We hope) the unity government will take the lead. A lot of people here think the stage is set (for) a meaningful resumption of negotiations. Now it is up to leaders on both sides to make it happen, to move beyond (the same political hurdles.)

“Both leaderships must rise up to the occasion for us to move forward. Otherwise, the temporary cease-fire may last for a few months, then we will be back to the resumption of hostilities.”

The cease-fire that took effect Aug. 26 calls for the easing of the Israeli-enforced embargo to allow humanitarian aid and construction material into Gaza under strict monitoring. Egyptians, who brokered the cease-fire, will open the Rafah crossing into the Gaza Strip. Terms also include enlarging the offshore zone for Palestinian fishermen to six miles.

The agreement was the latest of numerous attempts to end a seven-week conflict in which more than 2,100 largely civilian Palestinians and 70 Israelis, including 64 soldiers, were killed.

The organizations have coordinated their aid efforts, with Caritas Jerusalem focusing on food and cash assistance while Catholic Relief Services is distributing nonfood items and CNEWA is assisting with repairing damaged homes and institutions.

Father Raed Abusahlia, director of Caritas Jerusalem, said his agency’s long-term emergency appeal would last until Christmas. He said Caritas will provide food to 2,000 families as well as a cash distribution about $350 to all the Christian families in Gaza, with specific emphasis on those who lost all of their possessions and homes.

Caritas also will provide all the necessary school supplies for the students of the five Christian schools in Gaza, although it is not clear when school will begin.

“At the same time we have already sent three truckloads of food, diapers, milk and hygiene supplies last week,” he said, noting that the almost $84,000 worth of supplies came from local Catholic parishes as well as four Israeli groups.

El-Yousef said response to CNEWA’s earlier appeal for help from its donors has surpassed expectations, largely thanks to donations from European donors; he said donations would soon top $1 million. He added that the money will be largely used to help rebuild and rehabilitate Christian homes and institutions damaged during the conflict.

He said the big challenge is the Holy Family School, which Argentine Father Jorge Hernandez of the Institute of the Incarnate Word opened up to shelter hundreds of Palestinians who fled their homes during the Israeli airstrikes. Much of the furniture has been destroyed and the classrooms, which were used and divided as living quarters, must be restored to their previous conditions.

El-Yousef said when school begins in Gaza, CNEWA will implement its psychosocial intervention plan. The United Nations says approximately 373,000 Gaza children are in need of psychosocial help, he noted.