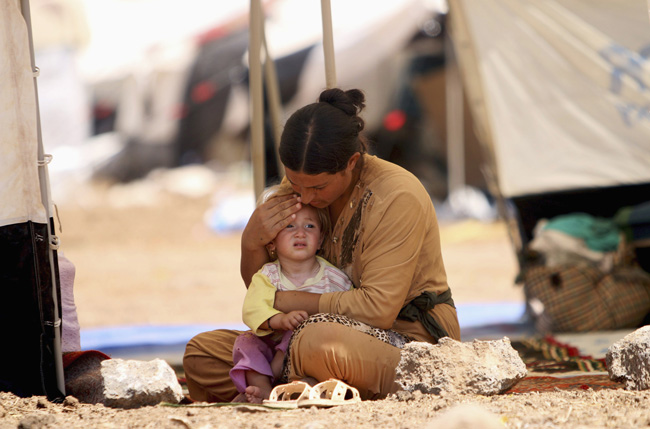 A woman who fled the violence in the Iraqi town of Sinjar sits with a child inside a tent at a camp in Syria's northern town of Qamishli Aug. 17. (CNS photo/Rodi Said, Reuters) 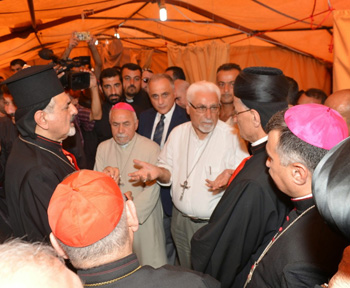 “What we, the five patriarchs, saw in Ankawa, Irbil and other cities of Kurdistan, was something indescribable in terms of the violation of human rights and the threat of disappearing of various communities among the vulnerable minorities of Northern Iraq,” Patriarch Younan said. “It is a pure and simple religious cleansing and attempted genocide.

Patriarch Younan and Syriac Orthodox Patriarch Ignatius Aphrem II stayed in Iraq for six days after arriving as part of a delegation of Catholic and Orthodox patriarchs who visited Irbil to give moral and spiritual support to the beleaguered Iraqis from the Ninevah Plain. The displaced minorities — Christians, Yezidis, Shiite Muslims and Shabaks — sought refuge there from their besieged towns and villages, which fell to Islamic State militants in early August after they were evicted for their religious affiliation.

Patriarch Younan spoke to Catholic News Service about the flood of displaced Iraqis they encountered.

In the Kurdistan region, “we saw hundreds of families still living on the streets, exposed to an unbearable heat wave, lacking the basic needs and primarily fearing for their future,” as winter approaches, Patriarch Younan said. Temperatures in the Kurdish region currently climb above 105 degrees Fahrenheit, yet winters are harsh and freezing, often with torrential rain and snow.

Patriarch Younan said the most-asked question by many of the Christian refugees was, “Can we ever return?”

“At that question, the most feared answer was: No answer could be given,” he said.

The patriarch said that along with the little financial assistance they could offer the displaced, the patriarchs “prayed with them, consoling, encouraging and inspiring them with Christian ‘Hope against all hope,’ repeatedly reminding them of the promise of the Lord: ‘Do not be afraid, you little flock. … I will be with you until the end of time.'”

“The church’s leaders committed themselves to sound the alarm of the very survival of Christians in Iraq and in the whole Middle East region and pledged to bring the plight of their people to all international arenas: the (U.N.) Security Council, the United States of America, the European Union, as well to Russia and China,” Patriarch Younan said.

The patriarchs met at Bkerke, north of Beirut, Aug. 27, to further address the crisis. Local media in Beirut reported that Cardinal Bechara Rai, the Maronite patriarch, was scheduled to meet with Pope Francis the following day.

All of the patriarchs involved in the Irbil delegation, along with other Catholic and Orthodox patriarchs of the Middle East and Cardinal Leonardo Sandri, prefect of the Congregation for Eastern Churches, are scheduled to participate in the Sept. 9-11 In Defense of Christians Inaugural Summit for Middle East Christians in Washington. As part of that visit, the prelates will also seek to meet with members of Congress and White House officials.

NEXT: Panic spreading faster than Ebola among quarantined West Africans